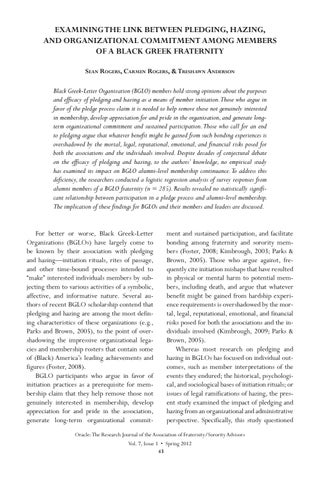 EXAMINING THE LINK BETWEEN PLEDGING, HAZING, AND ORGANIZATIONAL COMMITMENT AMONG MEMBERS OF A BLACK GREEK FRATERNITY Sean Rogers, Carmen Rogers, & Treshawn Anderson Black Greek-Letter Organization (BGLO) members hold strong opinions about the purposes and efficacy of pledging and hazing as a means of member initiation.Those who argue in favor of the pledge process claim it is needed to help remove those not genuinely interested in membership, develop appreciation for and pride in the organization, and generate longterm organizational commitment and sustained participation. Those who call for an end to pledging argue that whatever benefit might be gained from such bonding experiences is overshadowed by the mortal, legal, reputational, emotional, and financial risks posed for both the associations and the individuals involved. Despite decades of conjectural debate on the efficacy of pledging and hazing, to the authors’ knowledge, no empirical study has examined its impact on BGLO alumni-level membership continuance. To address this deficiency, the researchers conducted a logistic regression analysis of survey responses from alumni members of a BGLO fraternity (n = 285). Results revealed no statistically significant relationship between participation in a pledge process and alumni-level membership. The implication of these findings for BGLOs and their members and leaders are discussed. For better or worse, Black Greek-Letter Organizations (BGLOs) have largely come to be known by their association with pledging and hazing—initiation rituals, rites of passage, and other time-bound processes intended to “make” interested individuals members by subjecting them to various activities of a symbolic, affective, and informative nature. Several authors of recent BGLO scholarship contend that pledging and hazing are among the most defining characteristics of these organizations (e.g., Parks and Brown, 2005), to the point of overshadowing the impressive organizational legacies and membership rosters that contain some of (Black) America’s leading achievements and figures (Foster, 2008). BGLO participants who argue in favor of initiation practices as a prerequisite for membership claim that they help remove those not genuinely interested in membership, develop appreciation for and pride in the association, generate long-term organizational commit-

ment and sustained participation, and facilitate bonding among fraternity and sorority members (Foster, 2008; Kimbrough, 2003; Parks & Brown, 2005). Those who argue against, frequently cite initiation mishaps that have resulted in physical or mental harm to potential members, including death, and argue that whatever benefit might be gained from hardship experience requirements is overshadowed by the mortal, legal, reputational, emotional, and financial risks posed for both the associations and the individuals involved (Kimbrough, 2009; Parks & Brown, 2005). Whereas most research on pledging and hazing in BGLOs has focused on individual outcomes, such as member interpretations of the events they endured; the historical, psychological, and sociological bases of initiation rituals; or issues of legal ramifications of hazing, the present study examined the impact of pledging and hazing from an organizational and administrative perspective. Specifically, this study questioned

Oracle: The Research Journal of the Association of Fraternity/Sorority Advisors Vol. 7, Issue 1 • Spring 2012 43

Articles include: “Ever After Strictly and Rigidly Obeyed—With Some Exceptions”: Administrative Responses to Hazing in the 1870s; Towards a...

Articles include: “Ever After Strictly and Rigidly Obeyed—With Some Exceptions”: Administrative Responses to Hazing in the 1870s; Towards a...