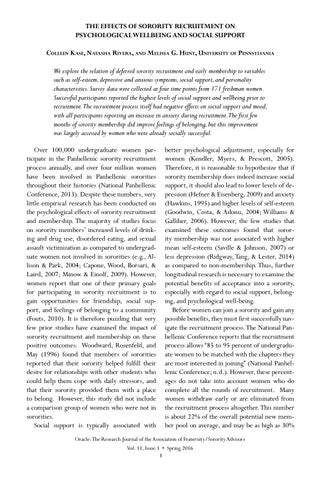 THE EFFECTS OF SORORITY RECRUITMENT ON PSYCHOLOGICAL WELLBEING AND SOCIAL SUPPORT Colleen Kase, Natasha Rivera, and Melissa G. Hunt, University of Pennsylvania We explore the relation of deferred sorority recruitment and early membership to variables such as self-esteem, depressive and anxious symptoms, social support, and personality characteristics. Survey data were collected at four time points from 171 freshman women. Successful participants reported the highest levels of social support and wellbeing prior to recruitment.The recruitment process itself had negative effects on social support and mood, with all participants reporting an increase in anxiety during recruitment.The first few months of sorority membership did improve feelings of belonging, but this improvement was largely accessed by women who were already socially successful.

Over 100,000 undergraduate women participate in the Panhellenic sorority recruitment process annually, and over four million women have been involved in Panhellenic sororities throughout their histories (National Panhellenic Conference, 2013). Despite these numbers, very little empirical research has been conducted on the psychological effects of sorority recruitment and membership. The majority of studies focus on sorority members’ increased levels of drinking and drug use, disordered eating, and sexual assault victimization as compared to undergraduate women not involved in sororities (e.g., Allison & Park, 2004; Capone, Wood, Borsari, & Laird, 2007; Minow & Einolf, 2009). However, women report that one of their primary goals for participating in sorority recruitment is to gain opportunities for friendship, social support, and feelings of belonging to a community (Fouts, 2010). It is therefore puzzling that very few prior studies have examined the impact of sorority recruitment and membership on these positive outcomes. Woodward, Rosenfeld, and May (1996) found that members of sororities reported that their sorority helped fulfill their desire for relationships with other students who could help them cope with daily stressors, and that their sorority provided them with a place to belong. However, this study did not include a comparison group of women who were not in sororities. Social support is typically associated with

better psychological adjustment, especially for women (Kendler, Myers, & Prescott, 2005). Therefore, it is reasonable to hypothesize that if sorority membership does indeed increase social support, it should also lead to lower levels of depression (Hefner & Eisenberg, 2009) and anxiety (Hawkins, 1995) and higher levels of self-esteem (Goodwin, Costa, & Adonu, 2004; Williams & Galliher, 2006). However, the few studies that examined these outcomes found that sorority membership was not associated with higher mean self-esteem (Saville & Johnson, 2007) or less depression (Ridgway, Tang, & Lester, 2014) as compared to non-membership. Thus, further longitudinal research is necessary to examine the potential benefits of acceptance into a sorority, especially with regard to social support, belonging, and psychological well-being. Before women can join a sorority and gain any possible benefits, they must first successfully navigate the recruitment process. The National Panhellenic Conference reports that the recruitment process allows “85 to 95 percent of undergraduate women to be matched with the chapters they are most interested in joining” (National Panhellenic Conference; n.d.). However, these percentages do not take into account women who do complete all the rounds of recruitment. Many women withdraw early or are eliminated from the recruitment process altogether. This number is about 22% of the overall potential new member pool on average, and may be as high as 30%

Oracle: The Research Journal of the Association of Fraternity/Sorority Advisors Vol. 11, Issue 1 • Spring 2016 1