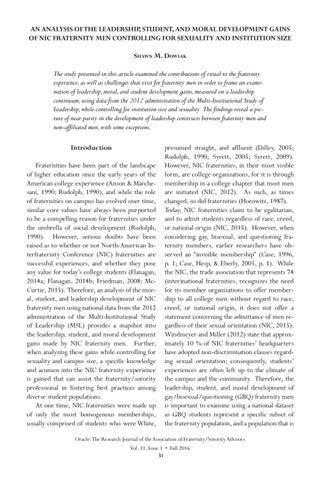 AN ANALYSIS OF THE LEADERSHIP, STUDENT, AND MORAL DEVELOPMENT GAINS OF NIC FRATERNITY MEN CONTROLLING FOR SEXUALITY AND INSTITUTION SIZE Shawn M. Dowiak The study presented in this article examined the contributions of ritual to the fraternity experience, as well as challenges that exist for fraternity men in order to frame an examination of leadership, moral, and student development gains, measured on a leadership continuum, using data from the 2012 administration of the Multi-Institutional Study of Leadership, while controlling for institution size and sexuality. The findings reveal a picture of near parity in the development of leadership constructs between fraternity men and non-affiliated men, with some exceptions. Introduction Fraternities have been part of the landscape of higher education since the early years of the American college experience (Anson & Marchesani, 1990; Rudolph, 1990), and while the role of fraternities on campus has evolved over time, similar core values have always been purported to be a compelling reason for fraternities under the umbrella of social development (Rudolph, 1990). However, serious doubts have been raised as to whether or not North-American Interfraternity Conference (NIC) fraternities are successful experiences, and whether they pose any value for today’s college students (Flanagan, 2014a; Flanagan, 2014b; Friedman, 2008; McCurtie, 2015). Therefore, an analysis of the moral, student, and leadership development of NIC fraternity men using national data from the 2012 administration of the Multi-Institutional Study of Leadership (MSL) provides a snapshot into the leadership, student, and moral development gains made by NIC fraternity men. Further, when analyzing these gains while controlling for sexuality and campus size, a specific knowledge and acumen into the NIC fraternity experience is gained that can assist the fraternity/sorority professional in fostering best practices among diverse student populations. At one time, NIC fraternities were made up of only the most homogenous memberships, usually comprised of students who were White,

presumed straight, and affluent (Dilley, 2005; Rudolph, 1990; Syrett, 2005; Syrett, 2009). However, NIC fraternities, in their most visible form, are college organizations, for it is through membership in a college chapter that most men are initiated (NIC, 2012). As such, as times changed, so did fraternities (Horowitz, 1987). Today, NIC fraternities claim to be egalitarian, and to admit students regardless of race, creed, or national origin (NIC, 2015). However, when considering gay, bisexual, and questioning fraternity members, earlier researchers have observed an “invisible membership” (Case, 1996, p. 1; Case, Hesp, & Eberly, 2005, p. 1). While the NIC, the trade association that represents 74 (inter)national fraternities, recognizes the need for its member organizations to offer membership to all college men without regard to race, creed, or national origin, it does not offer a statement concerning the admittance of men regardless of their sexual orientation (NIC, 2015). Windmeyer and Miller (2012) state that approximately 10 % of NIC fraternities’ headquarters have adopted non-discrimination clauses regarding sexual orientation; consequently, students’ experiences are often left up to the climate of the campus and the community. Therefore, the leadership, student, and moral development of gay/bisexual/questioning (GBQ) fraternity men is important to examine using a national dataset as GBQ students represent a specific subset of the fraternity population, and a population that is

Oracle: The Research Journal of the Association of Fraternity/Sorority Advisors Vol. 11, Issue 1 • Fall 2016 31

Articles include: Bad Apples or Bad Barrels? Moral Disengagement, Social Influence, and the Perpetuation of Hazing in the College Fraternity...

Articles include: Bad Apples or Bad Barrels? Moral Disengagement, Social Influence, and the Perpetuation of Hazing in the College Fraternity...