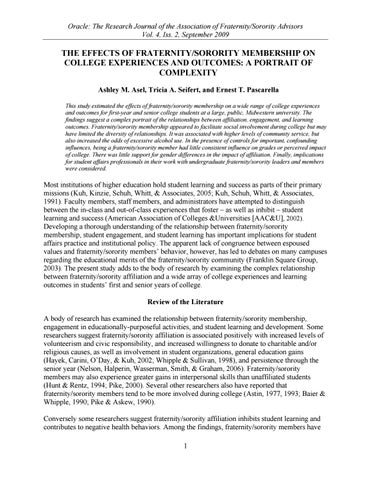 Oracle: The Research Journal of the Association of Fraternity/Sorority Advisors Vol. 4, Iss. 2, September 2009

THE EFFECTS OF FRATERNITY/SORORITY MEMBERSHIP ON COLLEGE EXPERIENCES AND OUTCOMES: A PORTRAIT OF COMPLEXITY Ashley M. Asel, Tricia A. Seifert, and Ernest T. Pascarella This study estimated the effects of fraternity/sorority membership on a wide range of college experiences and outcomes for first-year and senior college students at a large, public, Midwestern university. The findings suggest a complex portrait of the relationships between affiliation, engagement, and learning outcomes. Fraternity/sorority membership appeared to facilitate social involvement during college but may have limited the diversity of relationships. It was associated with higher levels of community service, but also increased the odds of excessive alcohol use. In the presence of controls for important, confounding influences, being a fraternity/sorority member had little consistent influence on grades or perceived impact of college. There was little support for gender differences in the impact of affiliation. Finally, implications for student affairs professionals in their work with undergraduate fraternity/sorority leaders and members were considered.