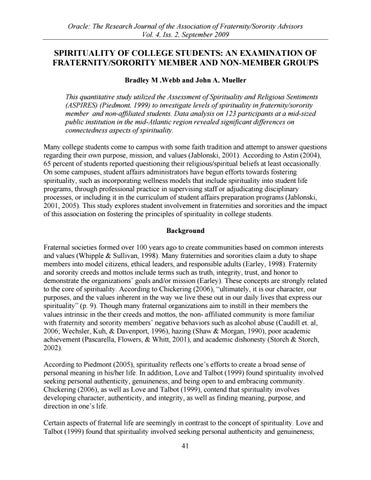 Oracle: The Research Journal of the Association of Fraternity/Sorority Advisors Vol. 4, Iss. 2, September 2009

SPIRITUALITY OF COLLEGE STUDENTS: AN EXAMINATION OF FRATERNITY/SORORITY MEMBER AND NON-MEMBER GROUPS Bradley M .Webb and John A. Mueller This quantitative study utilized the Assessment of Spirituality and Religious Sentiments (ASPIRES) (Piedmont, 1999) to investigate levels of spirituality in fraternity/sorority member and non-affiliated students. Data analysis on 123 participants at a mid-sized public institution in the mid-Atlantic region revealed significant differences on connectedness aspects of spirituality. Many college students come to campus with some faith tradition and attempt to answer questions regarding their own purpose, mission, and values (Jablonski, 2001). According to Astin (2004), 65 percent of students reported questioning their religious/spiritual beliefs at least occasionally. On some campuses, student affairs administrators have begun efforts towards fostering spirituality, such as incorporating wellness models that include spirituality into student life programs, through professional practice in supervising staff or adjudicating disciplinary processes, or including it in the curriculum of student affairs preparation programs (Jablonski, 2001, 2005). This study explores student involvement in fraternities and sororities and the impact of this association on fostering the principles of spirituality in college students. Background Fraternal societies formed over 100 years ago to create communities based on common interests and values (Whipple & Sullivan, 1998). Many fraternities and sororities claim a duty to shape members into model citizens, ethical leaders, and responsible adults (Earley, 1998). Fraternity and sorority creeds and mottos include terms such as truth, integrity, trust, and honor to demonstrate the organizations’ goals and/or mission (Earley). These concepts are strongly related to the core of spirituality. According to Chickering (2006), “ultimately, it is our character, our purposes, and the values inherent in the way we live these out in our daily lives that express our spirituality” (p. 9). Though many fraternal organizations aim to instill in their members the values intrinsic in the their creeds and mottos, the non- affiliated community is more familiar with fraternity and sorority members’ negative behaviors such as alcohol abuse (Caudill et. al, 2006; Wechsler, Kuh, & Davenport, 1996), hazing (Shaw & Morgan, 1990), poor academic achievement (Pascarella, Flowers, & Whitt, 2001), and academic dishonesty (Storch & Storch, 2002). According to Piedmont (2005), spirituality reflects one’s efforts to create a broad sense of personal meaning in his/her life. In addition, Love and Talbot (1999) found spirituality involved seeking personal authenticity, genuineness, and being open to and embracing community. Chickering (2006), as well as Love and Talbot (1999), contend that spirituality involves developing character, authenticity, and integrity, as well as finding meaning, purpose, and direction in one’s life. Certain aspects of fraternal life are seemingly in contrast to the concept of spirituality. Love and Talbot (1999) found that spirituality involved seeking personal authenticity and genuineness; 41