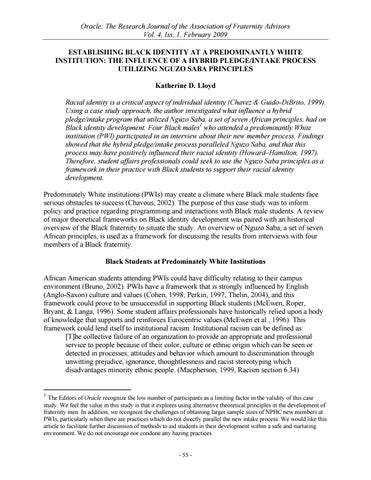 Oracle: The Research Journal of the Association of Fraternity Advisors Vol. 4, Iss. 1, February 2009 ESTABLISHING BLACK IDENTITY AT A PREDOMINANTLY WHITE INSTITUTION: THE INFLUENCE OF A HYBRID PLEDGE/INTAKE PROCESS UTILIZING NGUZO SABA PRINCIPLES Katherine D. Lloyd Racial identity is a critical aspect of individual identity (Chavez & Guido-DiBrito, 1999). Using a case study approach, the author investigated what influence a hybrid pledge/intake program that utilized Nguzo Saba, a set of seven African principles, had on Black identity development. Four Black males1 who attended a predominantly White institution (PWI) participated in an interview about their new member process. Findings showed that the hybrid pledge/intake process paralleled Nguzo Saba, and that this process may have positively influenced their racial identity (Howardâ&#x20AC;&#x201C;Hamilton, 1997). Therefore, student affairs professionals could seek to use the Nguzo Saba principles as a framework in their practice with Black students to support their racial identity development. Predominately White institutions (PWIs) may create a climate where Black male students face serious obstacles to success (Chavous, 2002). The purpose of this case study was to inform policy and practice regarding programming and interactions with Black male students. A review of major theoretical frameworks on Black identity development was paired with an historical overview of the Black fraternity to situate the study. An overview of Nguzo Saba, a set of seven African principles, is used as a framework for discussing the results from interviews with four members of a Black fraternity. Black Students at Predominately White Institutions African American students attending PWIs could have difficulty relating to their campus environment (Bruno, 2002). PWIs have a framework that is strongly influenced by English (Anglo-Saxon) culture and values (Cohen, 1998; Perkin, 1997; Thelin, 2004), and this framework could prove to be unsuccessful in supporting Black students (McEwen, Roper, Bryant, & Langa, 1996). Some student affairs professionals have historically relied upon a body of knowledge that supports and reinforces Eurocentric values (McEwen et al., 1996). This framework could lend itself to institutional racism. Institutional racism can be defined as: [T]he collective failure of an organization to provide an appropriate and professional service to people because of their color, culture or ethnic origin which can be seen or detected in processes; attitudes and behavior which amount to discrimination through unwitting prejudice, ignorance, thoughtlessness and racist stereotyping which disadvantages minority ethnic people. (Macpherson, 1999, Racism section 6.34)

The Editors of Oracle recognize the low number of participants as a limiting factor in the validity of this case study. We feel the value in this study is that it explores using alternative theoretical principles in the development of fraternity men. In addition, we recognize the challenges of obtaining larger sample sizes of NPHC new members at PWIs, particularly when there are practices which do not directly parallel the new intake process. We would like this article to facilitate further discussion of methods to aid students in their development within a safe and nurturing environment. We do not encourage nor condone any hazing practices.