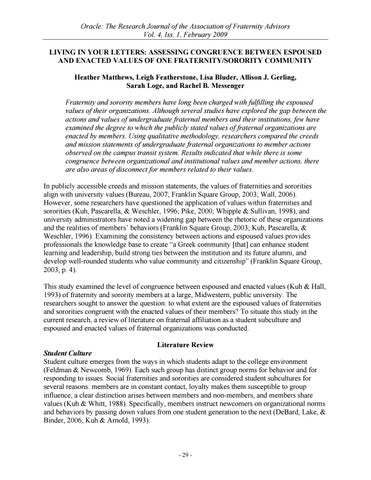 Oracle: The Research Journal of the Association of Fraternity Advisors Vol. 4, Iss. 1, February 2009 LIVING IN YOUR LETTERS: ASSESSING CONGRUENCE BETWEEN ESPOUSED AND ENACTED VALUES OF ONE FRATERNITY/SORORITY COMMUNITY Heather Matthews, Leigh Featherstone, Lisa Bluder, Allison J. Gerling, Sarah Loge, and Rachel B. Messenger Fraternity and sorority members have long been charged with fulfilling the espoused values of their organizations. Although several studies have explored the gap between the actions and values of undergraduate fraternal members and their institutions, few have examined the degree to which the publicly stated values of fraternal organizations are enacted by members. Using qualitative methodology, researchers compared the creeds and mission statements of undergraduate fraternal organizations to member actions observed on the campus transit system. Results indicated that while there is some congruence between organizational and institutional values and member actions, there are also areas of disconnect for members related to their values. In publicly accessible creeds and mission statements, the values of fraternities and sororities align with university values (Bureau, 2007; Franklin Square Group, 2003; Wall, 2006). However, some researchers have questioned the application of values within fraternities and sororities (Kuh, Pascarella, & Weschler, 1996; Pike, 2000; Whipple & Sullivan, 1998), and university administrators have noted a widening gap between the rhetoric of these organizations and the realities of members’ behaviors (Franklin Square Group, 2003; Kuh, Pascarella, & Weschler, 1996). Examining the consistency between actions and espoused values provides professionals the knowledge base to create “a Greek community [that] can enhance student learning and leadership, build strong ties between the institution and its future alumni, and develop well-rounded students who value community and citizenship” (Franklin Square Group, 2003, p. 4). This study examined the level of congruence between espoused and enacted values (Kuh & Hall, 1993) of fraternity and sorority members at a large, Midwestern, public university. The researchers sought to answer the question: to what extent are the espoused values of fraternities and sororities congruent with the enacted values of their members? To situate this study in the current research, a review of literature on fraternal affiliation as a student subculture and espoused and enacted values of fraternal organizations was conducted. Literature Review Student Culture Student culture emerges from the ways in which students adapt to the college environment (Feldman & Newcomb, 1969). Each such group has distinct group norms for behavior and for responding to issues. Social fraternities and sororities are considered student subcultures for several reasons: members are in constant contact, loyalty makes them susceptible to group influence, a clear distinction arises between members and non-members, and members share values (Kuh & Whitt, 1988). Specifically, members instruct newcomers on organizational norms and behaviors by passing down values from one student generation to the next (DeBard, Lake, & Binder, 2006; Kuh & Arnold, 1993).