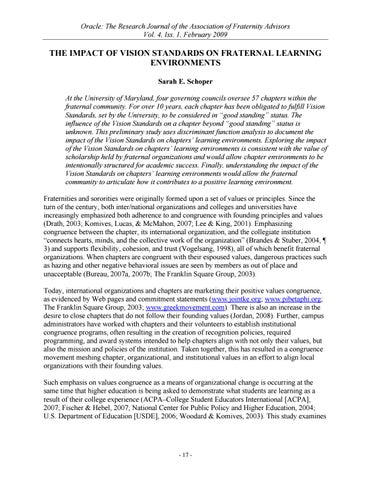 Oracle: The Research Journal of the Association of Fraternity Advisors Vol. 4, Iss. 1, February 2009

THE IMPACT OF VISION STANDARDS ON FRATERNAL LEARNING ENVIRONMENTS Sarah E. Schoper At the University of Maryland, four governing councils oversee 57 chapters within the fraternal community. For over 10 years, each chapter has been obligated to fulfill Vision Standards, set by the University, to be considered in “good standing” status. The influence of the Vision Standards on a chapter beyond “good standing” status is unknown. This preliminary study uses discriminant function analysis to document the impact of the Vision Standards on chapters’ learning environments. Exploring the impact of the Vision Standards on chapters’ learning environments is consistent with the value of scholarship held by fraternal organizations and would allow chapter environments to be intentionally structured for academic success. Finally, understanding the impact of the Vision Standards on chapters’ learning environments would allow the fraternal community to articulate how it contributes to a positive learning environment. Fraternities and sororities were originally formed upon a set of values or principles. Since the turn of the century, both inter/national organizations and colleges and universities have increasingly emphasized both adherence to and congruence with founding principles and values (Drath, 2003; Komives, Lucas, & McMahon, 2007; Lee & King, 2001). Emphasizing congruence between the chapter, its international organization, and the collegiate institution “connects hearts, minds, and the collective work of the organization” (Brandes & Stuber, 2004, ¶ 3) and supports flexibility, cohesion, and trust (Vogelsang, 1998), all of which benefit fraternal organizations. When chapters are congruent with their espoused values, dangerous practices such as hazing and other negative behavioral issues are seen by members as out of place and unacceptable (Bureau, 2007a, 2007b; The Franklin Square Group, 2003). Today, international organizations and chapters are marketing their positive values congruence, as evidenced by Web pages and commitment statements (www.jointke.org; www.pibetaphi.org; The Franklin Square Group, 2003; www.greekmovement.com). There is also an increase in the desire to close chapters that do not follow their founding values (Jordan, 2008). Further, campus administrators have worked with chapters and their volunteers to establish institutional congruence programs, often resulting in the creation of recognition policies, required programming, and award systems intended to help chapters align with not only their values, but also the mission and policies of the institution. Taken together, this has resulted in a congruence movement meshing chapter, organizational, and institutional values in an effort to align local organizations with their founding values. Such emphasis on values congruence as a means of organizational change is occurring at the same time that higher education is being asked to demonstrate what students are learning as a result of their college experience (ACPA–College Student Educators International [ACPA], 2007; Fischer & Hebel, 2007; National Center for Public Policy and Higher Education, 2004; U.S. Department of Education [USDE], 2006; Woodard & Komives, 2003). This study examines