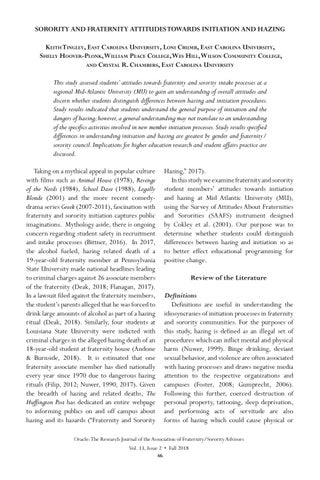 SORORITY AND FRATERNITY ATTITUDES TOWARDS INITIATION AND HAZING Keith Tingley, East Carolina University, Loni Crumb, East Carolina University, Shelly Hoover-Plonk, William Peace College, Wes Hill, Wilson Community College, and Crystal R. Chambers, East Carolina University This study assessed students’ attitudes towards fraternity and sorority intake processes at a regional Mid-Atlantic University (MU) to gain an understanding of overall attitudes and discern whether students distinguish differences between hazing and initiation procedures. Study results indicated that students understand the general purpose of initiation and the dangers of hazing; however, a general understanding may not translate to an understanding of the specifics activities involved in new member initiation processes. Study results specified differences in understanding initiation and hazing are greatest by gender and fraternity/ sorority council. Implications for higher education research and student affairs practice are discussed. Taking on a mythical appeal in popular culture with films such as Animal House (1978), Revenge of the Nerds (1984), School Daze (1988), Legally Blonde (2001) and the more recent comedydrama series Greek (2007-2011), fascination with fraternity and sorority initiation captures public imaginations. Mythology aside, there is ongoing concern regarding student safety in recruitment and intake processes (Bittner, 2016). In 2017, the alcohol fueled, hazing related death of a 19-year-old fraternity member at Pennsylvania State University made national headlines leading to criminal charges against 26 associate members of the fraternity (Deak, 2018; Flanagan, 2017). In a lawsuit filed against the fraternity members, the student’s parents alleged that he was forced to drink large amounts of alcohol as part of a hazing ritual (Deak, 2018). Similarly, four students at Louisiana State University were indicted with criminal charges in the alleged hazing death of an 18-year-old student at fraternity house (Andone & Burnside, 2018). It is estimated that one fraternity associate member has died nationally every year since 1970 due to dangerous hazing rituals (Filip, 2012; Nuwer, 1990, 2017). Given the breadth of hazing and related deaths, The Huffington Post has dedicated an entire webpage to informing publics on and off campus about hazing and its hazards (“Fraternity and Sorority

Hazing,” 2017). In this study we examine fraternity and sorority student members’ attitudes towards initiation and hazing at Mid Atlantic University (MU), using the Survey of Attitudes About Fraternities and Sororities (SAAFS) instrument designed by Cokley et al. (2001). Our purpose was to determine whether students could distinguish differences between hazing and initiation so as to better effect educational programming for positive change. Review of the Literature Definitions Definitions are useful in understanding the idiosyncrasies of initiation processes in fraternity and sorority communities. For the purposes of this study, hazing is defined as an illegal set of procedures which can inflict mental and physical harm (Nuwer, 1999). Binge drinking, deviant sexual behavior, and violence are often associated with hazing processes and draws negative media attention to the respective organizations and campuses (Foster, 2008; Gumprecht, 2006). Following this further, coerced destruction of personal property, tattooing, sleep deprivation, and performing acts of servitude are also forms of hazing which could cause physical or

Oracle: The Research Journal of the Association of Fraternity/Sorority Advisors Vol. 13, Issue 2 • Fall 2018 46