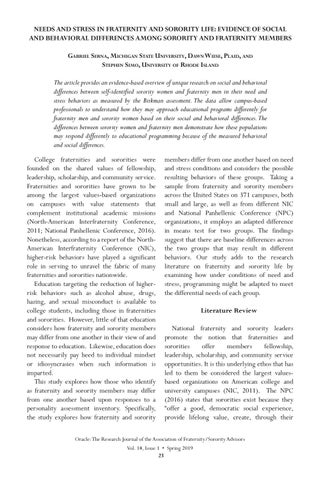 NEEDS AND STRESS IN FRATERNITY AND SORORITY LIFE: EVIDENCE OF SOCIAL AND BEHAVIORAL DIFFERENCES AMONG SORORITY AND FRATERNITY MEMBERS Gabriel Serna, Michigan State University, Dawn Wiese, Plaid, and Stephen Simo, University of Rhode Island The article provides an evidence-based overview of unique research on social and behavioral differences between self-identified sorority women and fraternity men in their need and stress behaviors as measured by the Birkman assessment. The data allow campus-based professionals to understand how they may approach educational programs differently for fraternity men and sorority women based on their social and behavioral differences. The differences between sorority women and fraternity men demonstrate how these populations may respond differently to educational programming because of the measured behavioral and social differences. College fraternities and sororities were founded on the shared values of fellowship, leadership, scholarship, and community service. Fraternities and sororities have grown to be among the largest values-based organizations on campuses with value statements that complement institutional academic missions (North-American Interfraternity Conference, 2011; National Panhellenic Conference, 2016). Nonetheless, according to a report of the NorthAmerican Interfraternity Conference (NIC), higher-risk behaviors have played a significant role in serving to unravel the fabric of many fraternities and sororities nationwide. Education targeting the reduction of higherrisk behaviors such as alcohol abuse, drugs, hazing, and sexual misconduct is available to college students, including those in fraternities and sororities. However, little of that education considers how fraternity and sorority members may differ from one another in their view of and response to education. Likewise, education does not necessarily pay heed to individual mindset or idiosyncrasies when such information is imparted. This study explores how those who identify as fraternity and sorority members may differ from one another based upon responses to a personality assessment inventory. Specifically, the study explores how fraternity and sorority

members differ from one another based on need and stress conditions and considers the possible resulting behaviors of these groups. Taking a sample from fraternity and sorority members across the United States on 371 campuses, both small and large, as well as from different NIC and National Panhellenic Conference (NPC) organizations, it employs an adapted difference in means test for two groups. The findings suggest that there are baseline differences across the two groups that may result in different behaviors. Our study adds to the research literature on fraternity and sorority life by examining how under conditions of need and stress, programming might be adapted to meet the differential needs of each group. Literature Review National fraternity and sorority leaders promote the notion that fraternities and sororities offer members fellowship, leadership, scholarship, and community service opportunities. It is this underlying ethos that has led to them be considered the largest valuesbased organizations on American college and university campuses (NIC, 2011). The NPC (2016) states that sororities exist because they â&amp;#x20AC;&amp;#x153;offer a good, democratic social experience, provide lifelong value, create, through their 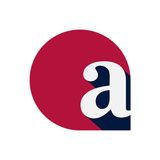 Behaviors Viewed as Deplorable by Peers: A Different Approach to Programming to Curb Unacceptable Behaviors in Fraternities and Sororities

Behaviors Viewed as Deplorable by Peers: A Different Approach to Programming to Curb Unacceptable Behaviors in Fraternities and Sororities