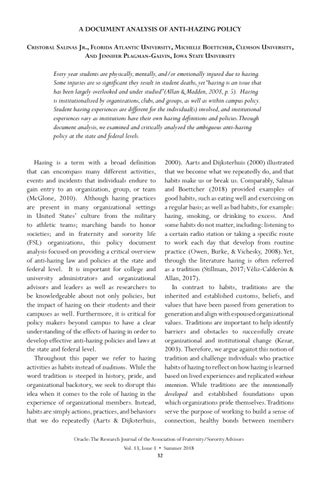 A DOCUMENT ANALYSIS OF ANTI-HAZING POLICY Cristobal Salinas Jr., Florida Atlantic University, Michelle Boettcher, Clemson University, And Jennifer Plagman-Galvin, Iowa State University Every year students are physically, mentally, and/or emotionally injured due to hazing. Some injuries are so significant they result in student deaths, yet “hazing is an issue that has been largely overlooked and under studied” (Allan & Madden, 2008, p. 5). Hazing is institutionalized by organizations, clubs, and groups, as well as within campus policy. Student hazing experiences are different for the individual(s) involved, and institutional experiences vary as institutions have their own hazing definitions and policies.Through document analysis, we examined and critically analyzed the ambiguous anti-hazing policy at the state and federal levels. Hazing is a term with a broad definition that can encompass many different activities, events and incidents that individuals endure to gain entry to an organization, group, or team (McGlone, 2010). Although hazing practices are present in many organizational settings in United States’ culture from the military to athletic teams; marching bands to honor societies; and in fraternity and sorority life (FSL) organizations, this policy document analysis focused on providing a critical overview of anti-hazing law and policies at the state and federal level. It is important for college and university administrators and organizational advisors and leaders as well as researchers to be knowledgeable about not only policies, but the impact of hazing on their students and their campuses as well. Furthermore, it is critical for policy makers beyond campus to have a clear understanding of the effects of hazing in order to develop effective anti-hazing policies and laws at the state and federal level. Throughout this paper we refer to hazing activities as habits instead of traditions. While the word tradition is steeped in history, pride, and organizational backstory, we seek to disrupt this idea when it comes to the role of hazing in the experience of organizational members. Instead, habits are simply actions, practices, and behaviors that we do repeatedly (Aarts & Dijksterhuis,

2000). Aarts and Dijksterhuis (2000) illustrated that we become what we repeatedly do, and that habits make us or break us. Comparably, Salinas and Boettcher (2018) provided examples of good habits, such as eating well and exercising on a regular basis; as well as bad habits, for example: hazing, smoking, or drinking to excess. And some habits do not matter, including: listening to a certain radio station or taking a specific route to work each day that develop from routine practice (Owen, Burke, & Vichesky, 2008). Yet, through the literature hazing is often referred as a tradition (Stillman, 2017; Véliz-Calderón & Allan, 2017). In contrast to habits, traditions are the inherited and established customs, beliefs, and values that have been passed from generation to generation and align with espoused organizational values. Traditions are important to help identify barriers and obstacles to successfully create organizational and institutional change (Kezar, 2003). Therefore, we argue against this notion of tradition and challenge individuals who practice habits of hazing to reflect on how hazing is learned based on lived experiences and replicated without intention. While traditions are the intentionally developed and established foundations upon which organizations pride themselves. Traditions serve the purpose of working to build a sense of connection, healthy bonds between members

Oracle: The Research Journal of the Association of Fraternity/Sorority Advisors Vol. 13, Issue 1 • Summer 2018 32