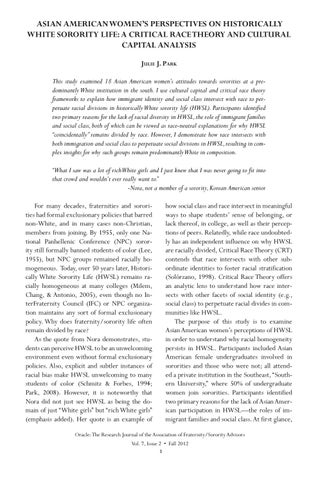 ASIAN AMERICAN WOMEN’S PERSPECTIVES ON HISTORICALLY WHITE SORORITY LIFE: A CRITICAL RACE THEORY AND CULTURAL CAPITAL ANALYSIS Julie J. Park This study examined 18 Asian American women’s attitudes towards sororities at a predominantly White institution in the south. I use cultural capital and critical race theory frameworks to explain how immigrant identity and social class intersect with race to perpetuate racial divisions in historically White sorority life (HWSL). Participants identified two primary reasons for the lack of racial diversity in HWSL, the role of immigrant families and social class, both of which can be viewed as race-neutral explanations for why HWSL “coincidentally” remains divided by race. However, I demonstrate how race intersects with both immigration and social class to perpetuate social divisions in HWSL, resulting in complex insights for why such groups remain predominantlyWhite in composition. “What I saw was a lot of rich White girls and I just knew that I was never going to fit into that crowd and wouldn’t ever really want to.” -Nora, not a member of a sorority, Korean American senior For many decades, fraternities and sororities had formal exclusionary policies that barred non-White, and in many cases non-Christian, members from joining. By 1955, only one National Panhellenic Conference (NPC) sorority still formally banned students of color (Lee, 1955), but NPC groups remained racially homogeneous. Today, over 50 years later, Historically White Sorority Life (HWSL) remains racially homogeneous at many colleges (Milem, Chang, & Antonio, 2005), even though no InterFraternity Council (IFC) or NPC organization maintains any sort of formal exclusionary policy. Why does fraternity/sorority life often remain divided by race? As the quote from Nora demonstrates, students can perceive HWSL to be an unwelcoming environment even without formal exclusionary policies. Also, explicit and subtler instances of racial bias make HWSL unwelcoming to many students of color (Schmitz & Forbes, 1994; Park, 2008). However, it is noteworthy that Nora did not just see HWSL as being the domain of just “White girls” but “rich White girls” (emphasis added). Her quote is an example of

how social class and race intersect in meaningful ways to shape students’ sense of belonging, or lack thereof, in college, as well as their perceptions of peers. Relatedly, while race undoubtedly has an independent influence on why HWSL are racially divided, Critical Race Theory (CRT) contends that race intersects with other subordinate identities to foster racial stratification (Solórzano, 1998). Critical Race Theory offers an analytic lens to understand how race intersects with other facets of social identity (e.g., social class) to perpetuate racial divides in communities like HWSL. The purpose of this study is to examine Asian American women’s perceptions of HWSL in order to understand why racial homogeneity persists in HWSL. Participants included Asian American female undergraduates involved in sororities and those who were not; all attended a private institution in the Southeast, “Southern University,” where 50% of undergraduate women join sororities. Participants identified two primary reasons for the lack of Asian American participation in HWSL—the roles of immigrant families and social class. At first glance,

Oracle: The Research Journal of the Association of Fraternity/Sorority Advisors Vol. 7, Issue 2 • Fall 2012 1