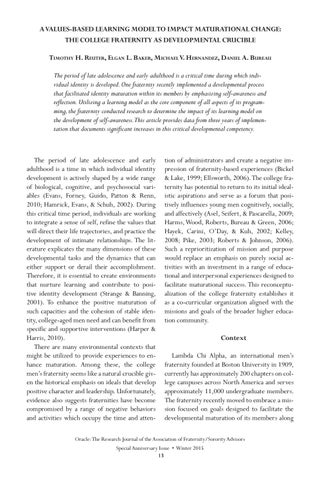 A VALUES-BASED LEARNING MODEL TO IMPACT MATURATIONAL CHANGE: THE COLLEGE FRATERNITY AS DEVELOPMENTAL CRUCIBLE Timothy H. Reuter, Elgan L. Baker, Michael V. Hernandez, Daniel A. Bureau The period of late adolescence and early adulthood is a critical time during which individual identity is developed. One fraternity recently implemented a developmental process that facilitated identity maturation within its members by emphasizing self-awareness and reflection. Utilizing a learning model as the core component of all aspects of its programming, the fraternity conducted research to determine the impact of its learning model on the development of self-awareness.This article provides data from three years of implementation that documents significant increases in this critical developmental competency.

The period of late adolescence and early adulthood is a time in which individual identity development is actively shaped by a wide range of biological, cognitive, and psychosocial variables (Evans, Forney, Guido, Patton & Renn, 2010; Hamrick, Evans, & Schuh, 2002). During this critical time period, individuals are working to integrate a sense of self, refine the values that will direct their life trajectories, and practice the development of intimate relationships. The literature explicates the many dimensions of these developmental tasks and the dynamics that can either support or derail their accomplishment. Therefore, it is essential to create environments that nurture learning and contribute to positive identity development (Strange & Banning, 2001). To enhance the positive maturation of such capacities and the cohesion of stable identity, college-aged men need and can benefit from specific and supportive interventions (Harper & Harris, 2010). There are many environmental contexts that might be utilized to provide experiences to enhance maturation. Among these, the college men’s fraternity seems like a natural crucible given the historical emphasis on ideals that develop positive character and leadership. Unfortunately, evidence also suggests fraternities have become compromised by a range of negative behaviors and activities which occupy the time and atten-

tion of administrators and create a negative impression of fraternity-based experiences (Bickel & Lake, 1999; Ellsworth, 2006). The college fraternity has potential to return to its initial idealistic aspirations and serve as a forum that positively influences young men cognitively, socially, and affectively (Asel, Seifert, & Pascarella, 2009; Harms, Wood, Roberts, Bureau & Green, 2006; Hayek, Carini, O’Day, & Kuh, 2002; Kelley, 2008; Pike, 2003; Roberts & Johnson, 2006). Such a reprioritization of mission and purpose would replace an emphasis on purely social activities with an investment in a range of educational and interpersonal experiences designed to facilitate maturational success. This reconceptualization of the college fraternity establishes it as a co-curricular organization aligned with the missions and goals of the broader higher education community. Context Lambda Chi Alpha, an international men’s fraternity founded at Boston University in 1909, currently has approximately 200 chapters on college campuses across North America and serves approximately 11,000 undergraduate members. The fraternity recently moved to embrace a mission focused on goals designed to facilitate the developmental maturation of its members along

Articles include: The Effects of Fraternity/Sorority Membership on College Experiences and Outcomes: A Portrait Of Complexity; A Values-Base...

Articles include: The Effects of Fraternity/Sorority Membership on College Experiences and Outcomes: A Portrait Of Complexity; A Values-Base...