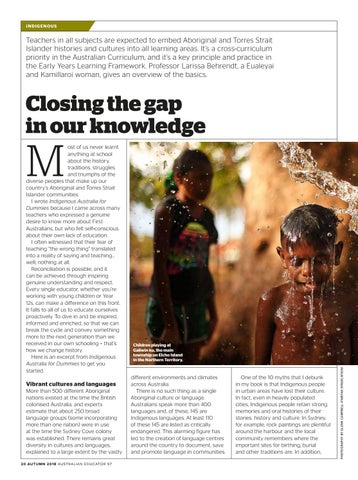 Teachers in all subjects are expected to embed Aboriginal and Torres Strait Islander histories and cultures into all learning areas. It’s a cross-curriculum priority in the Australian Curriculum, and it’s a key principle and practice in the Early Years Learning Framework. Professor Larissa Behrendt, a Eualeyai and Kamillaroi woman, gives an overview of the basics.

Closing the gap in our knowledge

Vibrant cultures and languages More than 500 different Aboriginal nations existed at the time the British colonised Australia, and experts estimate that about 250 broad language groups (some incorporating more than one nation) were in use at the time the Sydney Cove colony was established. There remains great diversity in cultures and languages, explained to a large extent by the vastly 20 AU T UM N 2 01 8 AUSTR ALI AN E D U CATOR 97

Children playing at Galiwin ku, the main township on Elcho Island in the Northern Territory.

different environments and climates across Australia. There is no such thing as a single Aboriginal culture or language. Australians speak more than 400 languages and, of these, 145 are Indigenous languages. At least 110 of these 145 are listed as critically endangered. This alarming figure has led to the creation of language centres around the country to document, save and promote language in communities.

One of the 10 myths that I debunk in my book is that Indigenous people in urban areas have lost their culture. In fact, even in heavily populated cities, Indigenous people retain strong memories and oral histories of their stories, history and culture. In Sydney, for example, rock paintings are plentiful around the harbour and the local community remembers where the important sites for birthing, burial and other traditions are. In addition,

ost of us never learnt anything at school about the history, traditions, struggles and triumphs of the diverse peoples that make up our country’s Aboriginal and Torres Strait Islander communities. I wrote Indigenous Australia for Dummies because I came across many teachers who expressed a genuine desire to know more about First Australians, but who felt self-conscious about their own lack of education. I often witnessed that their fear of teaching “the wrong thing” translated into a reality of saying and teaching… well, nothing at all. Reconciliation is possible, and it can be achieved through inspiring genuine understanding and respect. Every single educator, whether you’re working with young children or Year 12s, can make a difference on this front. It falls to all of us to educate ourselves proactively. To dive in and be inspired, informed and enriched, so that we can break the cycle and convey something more to the next generation than we received in our own schooling – that’s how we change history. Here is an excerpt from Indigenous Australia for Dummies to get you started.