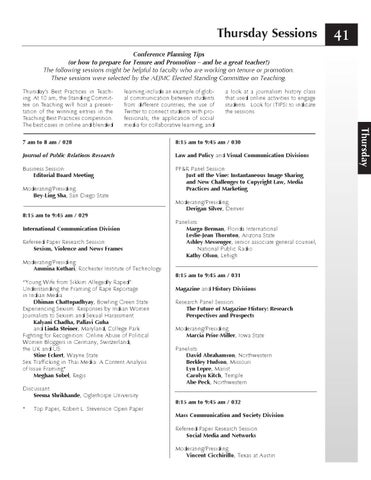 Conference Planning Tips Global for Bridges”: — be August 6-9, 2015 (or “AEJMC how to prepare Tenure San and Francisco, Promotion CA – and a great teacher!) The following sessions might be helpful to faculty who are working on tenure or promotion. These sessions were selected by the AEJMC Elected Standing Committee on Teaching. learning include an example of global communication between students from different countries; the use of Twitter to connect students with professionals; the application of social media for collaborative learning; and

a look at a journalism history class that used online activities to engage students. Look for (TIPS) to indicate the sessions.

Thursday’s Best Practices in Teaching. At 10 am, the Standing Committee on Teaching will host a presentation of the winning entries in the Teaching Best Practices competition. The best cases in online and blended

Association for Education in Journalism and Mass Communication

8:15 am to 11:30 am / 038 Association for Education in Journalism and Mass Communication Business Session: Trailblazers of Diversity in Journalism and Mass Communication Education Oral History Project Moderating/Presiding: Maggie Rivas-Rodriguez, Texas at Austin AEJMC has been deeply engaged in ensuring diversity in journalism and mass com education. For many members, diversity is at the heart of journalism. After the 1969 Kerner Commission Report, news organizations sought to address the lack of racial and ethnic representation in their newsrooms. Organizations such as the ASNE and the RTNDA set lofty goals to achieve parity in newsrooms. Minority journalists created their own associations to encourage more from their respective groups to enter journalism, to gain newsroom promotions, and finally, to challenge unfair journalistic treatments. Today, as news organizations face issues of survival, diversity appears to have lost priority. This meeting, of the Trailblazers of Diversity Oral History Project Committee, will refine procedures, consider a post-mortem of interviews conducted so far, and plan ahead with additional interviews. All interested AEJMC members welcome. 8:15 am to Noon / 039 Association for Education in Journalism and Mass Communication Business Session: Chile Regional Meeting Moderating/Presiding: Paula M. Poindexter, Texas at Austin and Ingrid Bachmann, Catholic University of Chile

Minorities and Communication and History Divisions

Panelists: A Five Decade Look at What Elements Were Left Out of Media Coverage During the Civil Rights Movement, Particularly White/Black Cooperation in the March Marquita Smith, John Brown A Look at How African-American Newspapers Contributed to the Public Memory of Dr. Martin Luther King Cathy Jackson, Norfolk State

10 am to 11:30 am / 048 Public Relations and Law and Policy Divisions Teaching Panel Session: Approaches to Social Media Assignments Based on the Ethical Considerations and Legal Limits Every Faculty Member Should Know Moderating/Presiding: Mitzi Lewis, Midwestern State

A Comparative Analysis on How Mainstream Media and the Black Press Covered Lynching Wanda Brockington, Norfolk State Exploration of Themes Emphasized in the Retelling Over the Civil Rights Movement Over the Years. The Division in Civil Rights Leadership and Coverage of the Federal Response in the Black Press Earnest L. Perry, Missouri We Shall Overcome: Helping Students Connect the Civil Rights Movement, 1954-1968, to the Present Frances Ward-Johnson, Elon

Divorce in Sports: Enduring Grief and the Fluidity of Fandom** Nathan Rodriguez, Kansas The Team versus Its Fans: Crisis Frames Using Social Media in the Case of Ray Rice Eunyoung Kim, Alabama The Return of the King: How Cleveland Reunited With LeBron After a Parasocial Breakup* Eryn Bostwick and Kathryn Lookadoo, Oklahoma

Commission on the Status of Women and Minorities and Communication Division

PF&R Panel Session: I Have Tenure, What’s Next?: A Panel for Mid-Career Women

Moderating/Presiding: Patricia A. Curtin, Oregon Panelists: Adrian Edwards, Head of News and Spokesperson, United Nations High Commissioner for Refugees Colleen Connolly-Ahern, Pennsylvania State Peter Laufer, Oregon their homes after experiencing persecution, trauma, and tragedy. Many refugees have witnessed gruesome acts; some have lost their family members to violence. Other themselves from disease, such as the Ebola virus. The plight and number of refugees can be so overwhelming as to make people feel powerless to help amidst the widespread suffering. The role of communication is pivotal in this context — both communication designed to help refugees directly (e.g., communication designed for refu-

PF&R Panel Session: The State of Media and Communications: A Survey of Alumni of More than 20 Major Schools

Researchers from the American Press Institute will present one of the largest surveys to date of journalism and communication school graduates going back many years. The project is a collaboration of over 20 top journalism and communications schools: a survey that probes deeply about graduates’ work experiences, attitudes on current journalism trends and views about their journalism education and continuing education. Researchers will present key findings from the data set of that includes more than 10,0000 respondents, thoughts on what that means for educators, and how other scholars may be able mine the data set in the future.

Association for Education in Journalism and Mass Communication

Moderating/Presiding: Jane Marcellus, Middle Tennessee State Panelists: Julie Andsager, Tennessee David Perlmutter, Texas Tech Linda Steiner, Maryland In academic publishing, “metrics” seem to be on everyone’s mind. What does the focus on metrics mean for scholars in journalism and media studies? How does it influence what we value and what we may not value in scholarship? After providing a quick, clear overview of SSCI, H indices, and their history, members of this panel will discuss how metrics can be used beneficially in ranking the value of scholarship and in the tenure and promotion process, as well as ethical problems they present and what they may hinder. 1:30 pm to 5:30 pm / 084

Panel Session: The Meaning of Metrics

Whether teaching stand-alone courses or doing our best to infuse crucial concepts and practices into others, this panel offers ideas on approaches to teaching diversity and creating an inclusive classroom. Besides incorporating ideas into courses, how can we handle those ad-hoc conflicts when a student says or does something that is offensive to others? This panel will explore both.

Advertising Division Off-site Tour: The San Francisco Examiner Moderating/Presiding: Jay Carran, Chief Revenue Officer (CRO), San Francisco’s The Examiner Some people say print is dead. We say, ‘You’re not using it right,’” states our host, Jay Curran, Chief Revenue Officer (CRO) at San Francisco’s The Examiner. In print, The San Francisco Examiner is paving the way for the future of news and changing the way people think about daily local newspapers. As the online version of the San Francisco Examiner, Examiner.com connects consumers with a premium blend of news and information from the best local news team in the Bay Area. Their offices are right around the corner from our conference hotel at 835 Market Street, Suite 550. Cap will be 15 members, so please respond ASAP to reserve your seat. We will meet in the hotel lobby at 3:20pm. 3:15 pm to 4:45 pm / 087 Communicating Science, Health, Environment and Risk Division Refereed Paper Research Session: Sexual Health and Communication Moderating/Presiding: Shirley Ho, Nanyang Technological The Porn Effect (?): Links Between College Men’s Exposure to Sexually Explicit Online Materials and Risky Sexual Health Behaviors and Attitudes Ashley McLain and Kim Walsh-Childers, Florida

History and Minorities and Communication Divisions Teaching Panel Session: News Coverage of Protests & Activism: A Discussion of Lessons Learned from Ferguson and Other High Profile Cases

Thursday Sessions “AEJMC Global Bridges”: San Francisco, CA — August 6-9, 2015 Conference attendees are invited to gather for an offsite visit to LinkedIn’s corporate offices in downtown San Francisco, a short seven-minute walk from the conference hotel. The event will feature an executive from LinkedIn discussing how the business-focused social network and its member-publishing platform can facilitate relationship building with reporters, bloggers, and social media representatives. In addition, a leader from The Hoffman Agency will offer an outside perspective about how organizations can enhance their businesses with LinkedIn. The PF&R Committee will lead a walking group from the hotel lobby at 3 p.m. Attendees are welcome to join the walking group or meet at the LinkedIn office at 505 Howard St.; however, attendees must arrive by 3:15 p.m. to check in with the group and receive a guest pass at the lobby. Attendees must register in advance to be able to check in at LinkedIn. Registration is free. 3:15 pm to 4:45 pm / 096 Visual Communication Division Refereed Paper Research Session: Picture Perfect 2: The Role Visual Communication Plays in Journals and in Electronic Media for Shaping Public Opinion Regarding Race, Culture, Identity, and Representation Moderating/Presiding: David Staton, Oregon Visual Expressions of Black Identity: African American and African Museum Web Sites Melissa Johnson and Keon Pettiway, North Carolina State Image, Race, and Rhetoric: The Contention for Visual Space on Twitter Michael DiBari, Hampton and Edgar Simpson, Central Michigan Citizen framing of Ferguson in 2015: Visual Representations on Twitter and Tumblr Ceeon Smith, Arizona State; Mia Moody-Ramirez, Baylor; Lillie Mae Fears and Brenda Randle, Arkansas State Five Pan-Arab TV News Networks Michael Bruce, Alabama The State of the Scholarship: Exploring the Theories and Methods Used in Visual Communication Journals Matthew J. Haught and David L. Morris II, Memphis Discussant: Julianne H. Newton, Oregon

Association of Schools of Journalism in Mass Communication

What are the best practices for evaluating the creative and professional activity of faculty and staff? While we have P&T evaluation tools for traditional academic staff, it is less clear how to measure, evaluate and recognize the creative and professional work that many of our colleagues are doing. Our panel of experienced administrator will share their best practices. 3:15 pm to 4:45 pm / 100

Research/PF&R Panel Session: Behind the Pages of Women’s Magazines: Professionals and Researchers Converse

“AEJMC Global Bridges”: San Francisco, CA — August 6-9, 2015 industries. The “AEJMC Research Works” initiative seeks to identify and disseminate new knowledge that will forge ties with our colleagues in the industry, government, nongovernment organizations and beyond. 5 pm to 6:30 pm / 111

Discussants: Colleen Connolly-Ahern, Pennsylvania State and Steve Urbanski, West Virginia 5 pm to 6:30 pm / 113 Poynter News University Business Session: Celebrating 10 Years of E-Learning With Poynter News University Moderating/Presiding: Vicki Krueger, director of interactive learning, The Poynter Institute Poynter’s News University is one of the world’s most innovative online journalism and media training programs. We are open to journalists, bloggers, freelance writers, journalism students. Anyone who wants to improve their journalism-based skills. We serve more than 340,000 users through self-directed courses, group seminars, and Webinars, covering subjects from multimedia techniques, to writing, to reporting, and beyond. 5 pm to 6:30 pm / 114

8:30 pm to 9:30 pm / 116 Association for Education in Journalism and Mass Communication Opening Reception Featuring light hors d’oeuvres and a cash bar, the reception is a perfect place to reconnect with friends and meet new colleagues. Free to all attending the conference, including family members. Tickets are not required, but please wear your name badge.