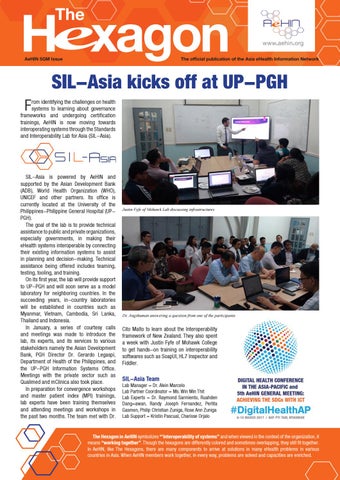 The official publication of the Asia eHealth Information Network

SIL-Asia kicks off at UP-PGH F

rom identifying the challenges on health systems to learning about governance frameworks and undergoing certification trainings, AeHIN is now moving towards interoperating systems through the Standards and Interoperability Lab for Asia (SIL-Asia).

SIL-Asia is powered by AeHIN and supported by the Asian Development Bank (ADB), World Health Organization (WHO), UNICEF and other partners. Its office is currently located at the University of the Philippines-Philippine General Hospital (UPPGH). The goal of the lab is to provide technical assistance to public and private organizations, especially governments, in making their eHealth systems interoperable by connecting their existing information systems to assist in planning and decision-making. Technical assistance being offered includes teaming, testing, tooling, and training. On its first year, the lab will provide support to UP-PGH and will soon serve as a model laboratory for neighboring countries. In the succeeding years, in-country laboratories will be established in countries such as Myanmar, Vietnam, Cambodia, Sri Lanka, Thailand and Indonesia. In January, a series of courtesy calls and meetings was made to introduce the lab, its experts, and its services to various stakeholders namely the Asian Development Bank, PGH Director Dr. Gerardo Legaspi, Department of Health of the Philippines, and the UP-PGH Information Systems Office. Meetings with the private sector such as Qualimed and mClinica also took place. In preparation for convergence workshops and master patient index (MPI) trainings, lab experts have been training themselves and attending meetings and workshops in the past two months. The team met with Dr.

Dr. Angshuman answering a question from one of the participants

Cito Malto to learn about the Interoperability framework of New Zealand. They also spent a week with Justin Fyfe of Mohawk College to get hands-on training on interoperability softwares such as SoapUI, HL7 Inspector and Fiddler.

The Hexagon in AeHIN symbolizes “‘interoperability of systems” and when viewed in the context of the organization, it means “working together”. Though the hexagons are differently colored and sometimes overlapping, they still fit together. In AeHIN, like The Hexagons, there are many components to arrive at solutions in many eHealth problems in various countries in Asia. When AeHIN members work together, in every way, problems are solved and capacities are enriched. 1

Hanoi, Vietnam--The Ministry of Health Vietnam hosted a convergence workshop last February 13 to 15, 2017. Initiated by the General Department for Preventive Medicine, the workshop was supported by the Ministry of Health-Information Technology Department and other health departments of the MOH. As in previous convergence workshops facilitated by AeHIN in Myanmar, Bhutan, Indonesia, participants appreciate the need to work together in order to manage the complex requirements of a comprehensive and effective national health information system. The Vietnam convergence workshop was made possible with support from WHO, ADB, UNICEF, and other partners.

Delegates pays courtesy visit to the Governor of Kagawa Prefecture

Manila, Philippines--Experts from ThoughtWorks visited the Philippine General Hospital last January 23 and 24 to present opportunities for partnership and collaboration. ThoughtWorks, an international software consulting company, has been developing and deploying an open source hospital information system called Bahmni. Upon learning about the similar technology choices of the Philippine General Hospital (PGH) and its leadership in the country, a team from ThoughtWorks offered to visit. They are Karl Brown, David Walton, Angshuman Sarkar and Jeffrey Xiong. On the first day of their visit, ThoughtWorks gave an introduction to their organization

and work. This was followed by a small tour around the hospital where the group learned how some of the departments store and use their systems. A meeting on what is in place and what can be done to improve the flow of information in the health systems of the hospital was held. The following day was spent presenting about opportunities for partnership and collaboration to hospital director, Dr. Gerardo Legaspi. A meet-up with OpenMRS Philippines and other Health IT Groups was then conducted at the SIL-Asia lab. The meeting was attended by over 20 participants from various departments of PGH and OpenMRS users from cities such as Navotas, Makati, and Pasay.

Tokyo, Japan--The Asia eHealth Information Network together with the Japan Telemedicine and Telecare Association (JTTA) and the Basic Health Needs organized the ASEAN-Japan Medical ICT Forum 2017 held last February 19-23. AeHIN Working Council Members Dr. Boonchai Kijsanayotin, Dr. Alvin Marcelo, Dr. Fazilah Allaudin, Ms. Aye Aye Sein and Mr. Jai Udayasankaran participated as event speakers. The forum was held under the ASEAN Community’s ASEAN-Japan Health Initiative. The objectives were to share and exchange knowledge and experiences on healthcare ICT and eHealth among Japan and ASEAN countries.  Experiences on ICT technology in health and non-health settings in Japan were also shared. The first two days of the event was a joint conference with JTTA at Keio Plaza Hotel, Tokyo. The three succeeding days of the conference were spent for site visits. The participants visited several institutes in Takasaki City, Gunma Prefecture and Takamatsu City, Kagawa Prefecture.   In the meeting participants learned about common needs and issues in the development of healthcare among ASEAN countries, the role of ICT as key driver in achieving excellence in healthcare service, concerns on good governance and lack of local manpower, and telemedicine and telehealth being the current technologies needed to be utilized to improve healthcare delivery especially for countries with many and distant remote sites. AeHIN also featured the network’s “Mind the GAPS” and “Fill the GAPS” framework at the forum. GAPS stands for Governance, Architecture, Program Management and Standards and interoperability.

Sri Lankaâ&#x20AC;&#x2122;s National Nutrition Monitoring and Intervention Tracking System Sri Lanka is seen as a model for delivery of high-quality health care in a low resource setting. The nutrition indicators of children, however, give a different picture. The government of Sri Lanka decided to address this issue with a national action plan coordinated at the highest level of government â&#x20AC;&#x201C; the Presidential Secretariat. The Health Informatics Society of Sri Lanka (HISSL) was invited to develop the national nutrition monitoring and intervention tracking system to support this multisector action plan. The system consisted of three components. The first component was a smart phone application to be used by public health midwives that enable them to track and monitor children in their areas. The second component was a web application to enable healthcare managers to monitor the nutrition status of children across the country. The third component alerted different government agencies in the health sector, social services sector, and agriculture sector to take personalised interventions aimed at households that had malnourished children using risk factor data gathered by public health midwives, and enabled them to monitor the effectiveness of the interventions. The software backbone of the system was DHIS 2. The financial support came from Unicef.

The first phase of implementation commenced in June 2016. This involved deploying the system in three districts â&#x20AC;&#x201C; Nuwara Eliya, Mathale, and Polonnaruwa. 632 public health midwives were trained and they commenced using the system. A post-implementation evaluation at the end of December 2016 showed that the system had been successfully deployed in the above mentioned districts. A decision has now been made to scale up the implementation to cover all districts. The system won the award for the best early stage app in South Asia at the mBillianth awards of the Digital Empowerment Foundation in New Delhi, India in July 2016; the Commonwealth Digital Health Awards in October 2016, and the eSwabhimani National ICT Awards in November 2016. HISSL would be happy to share our experience and expertise in implementing this system with other countries. For more information, please contact ceo@hissl.lk. 3

Laguna, Philippines--AeHIN sponsored the 5th International Conference on Global Health and Society entitled “Healthy People, Healthy Communities: Pathways, Innovations, Outcomes” held last January 27-28 at the Development Academy of the Philippines, Tagaytay City, Laguna. The conference was organized by the University of the Philippines-Manila and UP Manila Department of Behavioral Sciences in partnership with the Department of Society and Health, Mahidol University, Thailand. It brought together experts from institutions and professions from various countries to discuss issues and find ways to improve health systems and achieving equity in health to build healthier communities.

AeHIN joins PMAC 2017 Bangkok, Thailand—AeHIN members attended the Prince Mahidol Award Conference themed “Addressing the health of vulnerable populations for an inclusive society” held at the Centara Grand & Bangkok Convention Centre last January 29-February 3. AeHIN members who represented the network in the conference were Dr. Boonchai Kijsanayotin, Dr. Alvin Marcelo, and Mr. Karl Brown. In addition to participating in the main conference, Dr. Boonchai Kijsanayotin and Mr. Karl Brown participated as panelists in a side meeting organized by ThoughtWorks entitled “Use of digital technology to improve health service delivery for vulnerable populations.” The meeting discussed current digital health development in South and Southeast Asia, the implementation of open sources EMR and Bahmni in India, and ways to use digital health to improve healthcare services and public health of the vulnerable population. The PMAC 2017 conference gathered leaders from the public health sector and stakeholders to discuss the challenges brought by the exclusion of vulnerable populations particularly on their health and to exchange knowledge on implemented policies and programs that helped forward the inclusion of these vulnerable populations leading to their improved health were shared.

The PMAC 2018 will be on 29 January - 3 February 2018, Bangkok, Thailand under the theme “Making the World Safe from the Threats of Emerging Infectious Diseases”.The callforAbstractsforthePrinceMahidolAward Conference 2018 is on. For more details, visit www.pmaconference.mahidol.ac.th. Deadline of submissions in 31 March 2017. 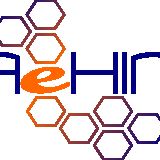