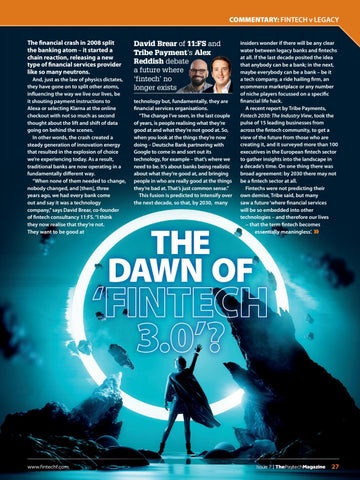 COMMENTARY: FINTECH v LEGACY The financial crash in 2008 split the banking atom – it started a chain reaction, releasing a new type of financial services provider like so many neutrons. And, just as the law of physics dictates, they have gone on to split other atoms, influencing the way we live our lives, be it shouting payment instructions to Alexa or selecting Klarna at the online checkout with not so much as second thought about the lift and shift of data going on behind the scenes. In other words, the crash created a steady generation of innovation energy that resulted in the explosion of choice we’re experiencing today. As a result, traditional banks are now operating in a fundamentally different way. “When none of them needed to change, nobody changed, and [then], three years ago, we had every bank come out and say it was a technology company,” says David Brear, co-founder of fintech consultancy 11:FS. “I think they now realise that they’re not. They want to be good at

David Brear of 11:FS and Tribe Payment’s Alex Reddish debate a future where ‘fintech’ no longer exists technology but, fundamentally, they are financial services organisations. “The change I’ve seen, in the last couple of years, is people realising what they’re good at and what they’re not good at. So, when you look at the things they’re now doing – Deutsche Bank partnering with Google to come in and sort out its technology, for example – that’s where we need to be. It’s about banks being realistic about what they’re good at, and bringing people in who are really good at the things they’re bad at. That’s just common sense.” This fusion is predicted to intensify over the next decade, so that, by 2030, many

insiders wonder if there will be any clear water between legacy banks and fintechs at all. If the last decade posited the idea that anybody can be a bank; in the next, maybe everybody can be a bank – be it a tech company, a ride hailing firm, an ecommerce marketplace or any number of niche players focussed on a specific financial life hack. A recent report by Tribe Payments, Fintech 2030: The Industry View, took the pulse of 15 leading businesses from across the fintech community, to get a view of the future from those who are creating it, and it surveyed more than 100 executives in the European fintech sector to gather insights into the landscape in a decade’s time. On one thing there was broad agreement: by 2030 there may not be a fintech sector at all. Fintechs were not predicting their own demise, Tribe said, but many saw a future ‘where financial services will be so embedded into other technologies – and therefore our lives – that the term fintech becomes essentially meaningless’.