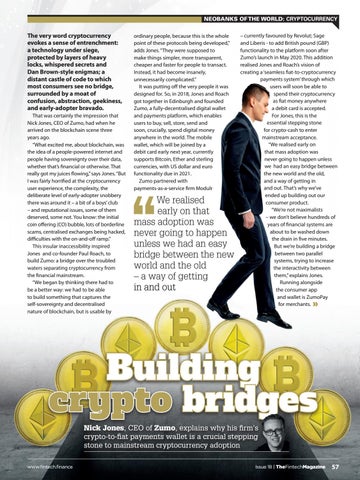 NEOBANKS OF THE WORLD: CRYPTOCURRENCY

The very word cryptocurrency evokes a sense of entrenchment: a technology under siege, protected by layers of heavy locks, whispered secrets and Dan Brown-style enigmas; a distant castle of code to which most consumers see no bridge, surrounded by a moat of confusion, abstraction, geekiness, and early-adopter bravado. That was certainly the impression that Nick Jones, CEO of Zumo, had when he arrived on the blockchain scene three years ago. “What excited me, about blockchain, was the idea of a people-powered internet and people having sovereignty over their data, whether that’s financial or otherwise. That really got my juices flowing,” says Jones. “But I was fairly horrified at the cryptocurrency user experience, the complexity, the deliberate level of early-adopter snobbery there was around it – a bit of a boys’ club – and reputational issues, some of them deserved, some not. You know: the initial coin offering (CO) bubble, lots of borderline scams, centralised exchanges being hacked, difficulties with the on-and-off ramp.” This insular inaccessibility inspired Jones and co-founder Paul Roach, to build Zumo: a bridge over the troubled waters separating cryptocurrency from the financial mainstream. “We began by thinking there had to be a better way: we had to be able to build something that captures the self-sovereignty and decentralised nature of blockchain, but is usable by

ordinary people, because this is the whole point of these protocols being developed,” adds Jones. “They were supposed to make things simpler, more transparent, cheaper and faster for people to transact. Instead, it had become insanely, unnecessarily complicated.” It was putting off the very people it was designed for. So, in 2018, Jones and Roach got together in Edinburgh and founded Zumo, a fully-decentralised digital wallet and payments platform, which enables users to buy, sell, store, send and soon, crucially, spend digital money anywhere in the world. The mobile wallet, which will be joined by a debit card early next year, currently supports Bitcoin, Ether and sterling currencies, with US dollar and euro functionality due in 2021. Zumo partnered with payments-as-a-service firm Modulr

– currently favoured by Revolut; Sage and Liberis - to add British pound (GBP) functionality to the platform soon after Zumo’s launch in May 2020. This addition realised Jones and Roach’s vision of creating a ‘seamless fiat-to-cryptocurrency payments system’ through which users will soon be able to spend their cryptocurrency as fiat money anywhere a debit card is accepted. For Jones, this is the essential stepping stone for crypto-cash to enter mainstream acceptance. “We realised early on that mass adoption was never going to happen unless we had an easy bridge between the new world and the old, and a way of getting in and out. That’s why we’ve ended up building out our consumer product. “We’re not maximalists – we don’t believe hundreds of years of financial systems are about to be washed down the drain in five minutes. But we’re building a bridge between two parallel systems, trying to increase the interactivity between them,” explains Jones. Running alongside the consumer app and wallet is ZumoPay for merchants.