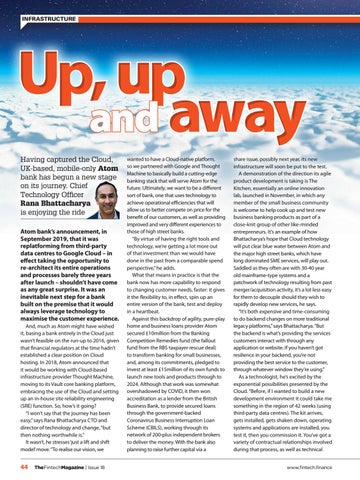 and Having captured the Cloud, UK-based, mobile-only Atom bank has begun a new stage on its journey. Chief Technology Officer Rana Bhattacharya is enjoying the ride Atom bank’s announcement, in September 2019, that it was replatforming from third-party data centres to Google Cloud – in effect taking the opportunity to re-architect its entire operations and processes barely three years after launch – shouldn’t have come as any great surprise. It was an inevitable next step for a bank built on the premise that it would always leverage technology to maximise the customer experience. And, much as Atom might have wished it, basing a bank entirely in the Cloud just wasn’t feasible on the run-up to 2016, given that financial regulators at the time hadn’t established a clear position on Cloud hosting. In 2018, Atom announced that it would be working with Cloud-based infrastructure provider Thought Machine, moving to its Vault core banking platform, embracing the use of the Cloud and setting up an in-house site reliability engineering (SRE) function. So, how’s it going? “I won’t say that the journey has been easy,” says Rana Bhattacharya CTO and director of technology and change, “but then nothing worthwhile is.” It wasn’t, he stresses ‘just a lift and shift model’ move. “To realise our vision, we

wanted to have a Cloud-native platform, so we partnered with Google and Thought Machine to basically build a cutting-edge banking stack that will serve Atom for the future. Ultimately, we want to be a different sort of bank, one that uses technology to achieve operational efficiencies that will allow us to better compete on price for the benefit of our customers, as well as providing improved and very different experiences to those of high street banks. “By virtue of having the right tools and technology, we’re getting a lot more out of that investment than we would have done in the past from a comparable spend perspective,” he adds. What that means in practice is that the bank now has more capability to respond to changing customer needs, faster: it gives it the flexibility to, in effect, spin up an entire version of the bank, test and deploy in a heartbeat. Against this backdrop of agility, pure-play home and business loans provider Atom secured £10million from the Banking Competition Remedies fund (the fallout fund from the RBS taxpayer rescue deal) to transform banking for small businesses, and, among its commitments, pledged to invest at least £15million of its own funds to launch new tools and products through to 2024. Although that work was somewhat overshadowed by COVID, it then won accreditation as a lender from the British Business Bank, to provide secured loans through the government-backed Coronavirus Business Interruption Loan Scheme (CBILS), working through its network of 200-plus independent brokers to deliver the money. With the bank also planning to raise further capital via a

share issue, possibly next year, its new infrastructure will soon be put to the test. A demonstration of the direction its agile product development is taking is The Kitchen, essentially an online innovation lab, launched in November, in which any member of the small business community is welcome to help cook up and test new business banking products as part of a close-knit group of other like-minded entrepreneurs. It’s an example of how Bhattacharya’s hope that Cloud technology will put clear blue water between Atom and the major high street banks, which have long dominated SME services, will play out. Saddled as they often are with 30-40 year old mainframe-type systems and a patchwork of technology resulting from past merger/acquisition activity, it’s a lot less easy for them to decouple should they wish to rapidly develop new services, he says. “It’s both expensive and time-consuming to do backend changes on more traditional legacy platforms,” says Bhattacharya. “But the backend is what’s providing the services customers interact with through any application or website. If you haven’t got resilience in your backend, you’re not providing the best service to the customer, through whatever window they’re using.” As a technologist, he’s excited by the exponential possibilities presented by the Cloud. “Before, if I wanted to build a new development environment it could take me something in the region of 42 weeks (using third-party data centres). The kit arrives, gets installed, gets shaken down, operating systems and applications are installed, you test it, then you commission it. You’ve got a variety of contractual relationships involved during that process, as well as technical www.fintech.finance