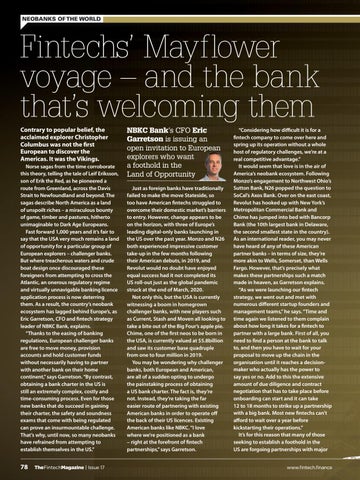 NEOBANKS OF THE WORLD

Fintechs’ Mayflower voyage – and the bank that’s welcoming them Contrary to popular belief, the acclaimed explorer Christopher Columbus was not the first European to discover the Americas. It was the Vikings. Norse sagas from the time corroborate this theory, telling the tale of Leif Eriksson, son of Erik the Red, as he pioneered a route from Greenland, across the Davis Strait to Newfoundland and beyond. The sagas describe North America as a land of unspoilt riches – a miraculous bounty of game, timber and pastures, hitherto unimaginable to Dark Age Europeans. Fast forward 1,000 years and it’s fair to say that the USA very much remains a land of opportunity for a particular group of European explorers – challenger banks. But where treacherous waters and crude boat design once discouraged these foreigners from attempting to cross the Atlantic, an onerous regulatory regime and virtually unnavigable banking licence application process is now deterring them. As a result, the country’s neobank ecosystem has lagged behind Europe’s, as Eric Garretson, CFO and fintech strategy leader of NBKC Bank, explains. “Thanks to the easing of banking regulations, European challenger banks are free to move money, provision accounts and hold customer funds without necessarily having to partner with another bank on their home continent,” says Garretson. “By contrast, obtaining a bank charter in the US is still an extremely complex, costly and time-consuming process. Even for those new banks that do succeed in gaining their charter, the safety and soundness exams that come with being regulated can prove an insurmountable challenge. That’s why, until now, so many neobanks have refrained from attempting to establish themselves in the US.”

NBKC Bank’s CFO Eric Garretson is issuing an open invitation to European explorers who want a foothold in the Land of Opportunity Just as foreign banks have traditionally failed to make the move Stateside, so too have American fintechs struggled to overcome their domestic market’s barriers to entry. However, change appears to be on the horizon, with three of Europe’s leading digital-only banks launching in the US over the past year. Monzo and N26 both experienced impressive customer take-up in the few months following their American debuts, in 2019, and Revolut would no doubt have enjoyed equal success had it not completed its US roll-out just as the global pandemic struck at the end of March, 2020. Not only this, but the USA is currently witnessing a boom in homegrown challenger banks, with new players such as Current, Stash and Moven all looking to take a bite out of the Big Four’s apple pie. Chime, one of the first neos to be born in the USA, is currently valued at $5.8billion and saw its customer base quadruple from one to four million in 2019. You may be wondering why challenger banks, both European and American, are all of a sudden opting to undergo the painstaking process of obtaining a US bank charter. The fact is, they’re not. Instead, they’re taking the far easier route of partnering with existing American banks in order to operate off the back of their US licences. Existing American banks like NBKC. “I love where we’re positioned as a bank – right at the forefront of fintech partnerships,” says Garretson.

“Considering how difficult it is for a fintech company to come over here and spring up its operation without a whole host of regulatory challenges, we’re at a real competitive advantage.” It would seem that love is in the air of America’s neobank ecosystem. Following Monzo’s engagement to Northwest Ohio’s Sutton Bank, N26 popped the question to SoCal’s Axos Bank. Over on the east coast, Revolut has hooked up with New York’s Metropolitan Commercial Bank and Chime has jumped into bed with Bancorp Bank (the 10th largest bank in Delaware, the second smallest state in the country). As an international reader, you may never have heard of any of these American partner banks – in terms of size, they’re more akin to Wells, Somerset, than Wells Fargo. However, that’s precisely what makes these partnerships such a match made in heaven, as Garretson explains. “As we were launching our fintech strategy, we went out and met with numerous different startup founders and management teams,” he says. “Time and time again we listened to them complain about how long it takes for a fintech to partner with a large bank. First of all, you need to find a person at the bank to talk to, and then you have to wait for your proposal to move up the chain in the organisation until it reaches a decisionmaker who actually has the power to say yes or no. Add to this the extensive amount of due diligence and contract negotiation that has to take place before onboarding can start and it can take 12 to 18 months to strike up a partnership with a big bank. Most new fintechs can’t afford to wait over a year before kickstarting their operations.” It’s for this reason that many of those seeking to establish a foothold in the US are forgoing partnerships with major www.fintech.finance 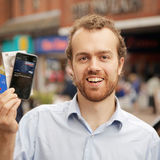