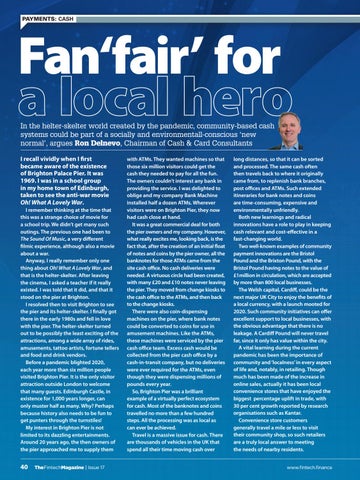 Fan‘fair’ for a local hero In the helter-skelter world created by the pandemic, community-based cash systems could be part of a socially and environmentall-conscious ‘new normal’, argues Ron Delnevo, Chairman of Cash & Card Consultants I recall vividly when I first became aware of the existence of Brighton Palace Pier. It was 1969. I was in a school group in my home town of Edinburgh, taken to see the anti-war movie Oh! What A Lovely War. I remember thinking at the time that this was a strange choice of movie for a school trip. We didn’t get many such outings. The previous one had been to The Sound Of Music, a very different filmic experience, although also a movie about a war. Anyway, I really remember only one thing about Oh! What A Lovely War, and that is the helter-skelter. After leaving the cinema, I asked a teacher if it really existed. I was told that it did, and that it stood on the pier at Brighton. I resolved then to visit Brighton to see the pier and its helter-skelter. I finally got there in the early 1980s and fell in love with the pier. The helter-skelter turned out to be possibly the least exciting of the attractions, among a wide array of rides, amusements, tattoo artists, fortune tellers and food and drink vendors. Before a pandemic blighted 2020, each year more than six million people visited Brighton Pier. It is the only visitor attraction outside London to welcome that many guests. Edinburgh Castle, in existence for 1,000 years longer, can only muster half as many. Why? Perhaps because history also needs to be fun to get punters through the turnstiles! My interest in Brighton Pier is not limited to its dazzling entertainments. Around 20 years ago, the then owners of the pier approached me to supply them

with ATMs. They wanted machines so that those six million visitors could get the cash they needed to pay for all the fun. The owners couldn’t interest any bank in providing the service. I was delighted to oblige and my company Bank Machine installed half a dozen ATMs. Wherever visitors were on Brighton Pier, they now had cash close at hand. It was a great commercial deal for both the pier owners and my company. However, what really excites me, looking back, is the fact that, after the creation of an initial float of notes and coins by the pier owner, all the banknotes for those ATMs came from the site cash office. No cash deliveries were needed. A virtuous circle had been created, with many £20 and £10 notes never leaving the pier. They moved from change kiosks to the cash office to the ATMs, and then back to the change kiosks. There were also coin-dispensing machines on the pier, where bank notes could be converted to coins for use in amusement machines. Like the ATMs, these machines were serviced by the pier cash office team. Excess cash would be collected from the pier cash office by a cash-in-transit company, but no deliveries were ever required for the ATMs, even though they were dispensing millions of pounds every year. So, Brighton Pier was a brilliant example of a virtually perfect ecosystem for cash. Most of the banknotes and coins travelled no more than a few hundred steps. All the processing was as local as can ever be achieved. Travel is a massive issue for cash. There are thousands of vehicles in the UK that spend all their time moving cash over

long distances, so that it can be sorted and processed. The same cash often then travels back to where it originally came from, to replenish bank branches, post offices and ATMs. Such extended itineraries for bank notes and coins are time-consuming, expensive and environmentally unfriendly. Both new learnings and radical innovations have a role to play in keeping cash relevant and cost-effective in a fast-changing world. Two well-known examples of community payment innovations are the Bristol Pound and the Brixton Pound, with the Bristol Pound having notes to the value of £1million in circulation, which are accepted by more than 800 local businesses. The Welsh capital, Cardiff, could be the next major UK City to enjoy the benefits of a local currency, with a launch mooted for 2020. Such community initiatives can offer excellent support to local businesses, with the obvious advantage that there is no leakage. A Cardiff Pound will never travel far, since it only has value within the city. A vital learning during the current pandemic has been the importance of community and ‘localness’ in every aspect of life and, notably, in retailing. Though much has been made of the increase in online sales, actually it has been local convenience stores that have enjoyed the biggest percentage uplift in trade, with 30 per cent growth reported by research organisations such as Kantar. Convenience store customers generally travel a mile or less to visit their community shop, so such retailers are a truly local answer to meeting the needs of nearby residents. www.fintech.finance