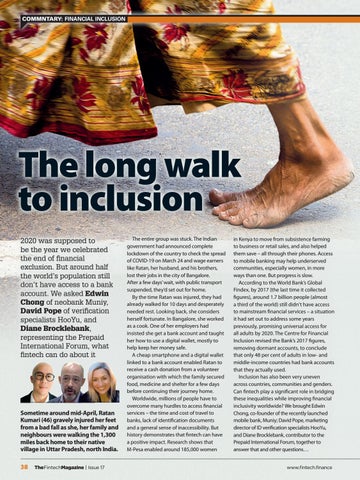 The long walk to inclusion 2020 was supposed to be the year we celebrated the end of financial exclusion. But around half the world’s population still don’t have access to a bank account. We asked Edwin Chong of neobank Muniy, David Pope of verification specialists HooYu, and Diane Brocklebank, representing the Prepaid International Forum, what fintech can do about it

Sometime around mid-April, Ratan Kumari (46) gravely injured her feet from a bad fall as she, her family and neighbours were walking the 1,300 miles back home to their native village in Uttar Pradesh, north India.

The entire group was stuck. The Indian government had announced complete lockdown of the country to check the spread of COVID-19 on March 24 and wage earners like Ratan, her husband, and his brothers, lost their jobs in the city of Bangalore. After a few days’ wait, with public transport suspended, they’d set out for home. By the time Ratan was injured, they had already walked for 10 days and desperately needed rest. Looking back, she considers herself fortunate. In Bangalore, she worked as a cook. One of her employers had insisted she get a bank account and taught her how to use a digital wallet, mostly to help keep her money safe. A cheap smartphone and a digital wallet linked to a bank account enabled Ratan to receive a cash donation from a volunteer organisation with which the family secured food, medicine and shelter for a few days before continuing their journey home. Worldwide, millions of people have to overcome many hurdles to access financial services – the time and cost of travel to banks, lack of identification documents and a general sense of inaccessibility. But history demonstrates that fintech can have a positive impact. Research shows that M-Pesa enabled around 185,000 women

in Kenya to move from subsistence farming to business or retail sales, and also helped them save – all through their phones. Access to mobile banking may help underserved communities, especially women, in more ways than one. But progress is slow. According to the World Bank’s Global Findex, by 2017 (the last time it collected figures), around 1.7 billion people (almost a third of the world) still didn't have access to mainstream financial services – a situation it had set out to address some years previously, promising universal access for all adults by 2020. The Centre for Financial Inclusion revised the Bank’s 2017 figures, removing dormant accounts, to conclude that only 48 per cent of adults in low- and middle-income countries had bank accounts that they actually used. Inclusion has also been very uneven across countries, communities and genders. Can fintech play a significant role in bridging these inequalities while improving financial inclusivity worldwide? We brought Edwin Chong, co-founder of the recently launched mobile bank, Muniy; David Pope, marketing director of ID verification specialists HooYu, and Diane Brocklebank, contributor to the Prepaid International Forum, together to answer that and other questions… www.fintech.finance