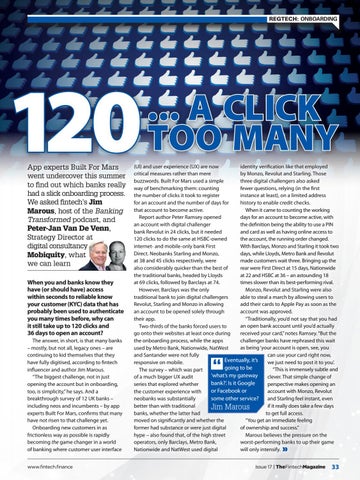 120 App experts Built For Mars went undercover this summer to find out which banks really had a slick onboarding process. We asked fintech’s Jim Marous, host of the Banking Transformed podcast, and Peter-Jan Van De Venn, Strategy Director at digital consultancy Mobiquity, what we can learn When you and banks know they have (or should have) access within seconds to reliable know your customer (KYC) data that has probably been used to authenticate you many times before, why can it still take up to 120 clicks and 36 days to open an account? The answer, in short, is that many banks – mostly, but not all, legacy ones – are continuing to kid themselves that they have fully digitised, according to fintech influencer and author Jim Marous. “The biggest challenge, not in just opening the account but in onboarding, too, is simplicity,” he says. And a breakthrough survey of 12 UK banks – including neos and incumbents – by app experts Built For Mars, confirms that many have not risen to that challenge yet. Onboarding new customers in as frictionless way as possible is rapidly becoming the game changer in a world of banking where customer user interface www.fintech.finance

identity verification like that employed (UI) and user experience (UX) are now by Monzo, Revolut and Starling. Those critical measures rather than mere three digital challengers also asked buzzwords. Built For Mars used a simple fewer questions, relying (in the first way of benchmarking them: counting instance at least), on a limited address the number of clicks it took to register history to enable credit checks. for an account and the number of days for When it came to counting the working that account to become active. days for an account to become active, with Report author Peter Ramsey opened the definition being the ability to use a PIN an account with digital challenger and card as well as having online access to bank Revolut in 24 clicks, but it needed the account, the running order changed. 120 clicks to do the same at HSBC-owned With Barclays, Monzo and Starling it took two internet- and mobile-only bank First days, while Lloyds, Metro Bank and Revolut Direct. Neobanks Starling and Monzo, made customers wait three. Bringing up the at 38 and 45 clicks respectively, were rear were First Direct at 15 days, Nationwide also considerably quicker than the best of at 22 and HSBC at 36 – an astounding 18 the traditional banks, headed by Lloyds times slower than its best-performing rival. at 69 clicks, followed by Barclays at 74. Monzo, Revolut and Starling were also However, Barclays was the only able to steal a march by allowing users to traditional bank to join digital challengers add their cards to Apple Pay as soon as the Revolut, Starling and Monzo in allowing account was approved. an account to be opened solely through “Traditionally, you’d not say that you had their app. an open bank account until you’d actually Two-thirds of the banks forced users to received your card,” notes Ramsey. “But the go onto their websites at least once during challenger banks have rephrased this wait the onboarding process, while the apps as being ‘your account is open, see, you used by Metro Bank, Nationwide, NatWest can use your card right now, and Santander were not fully Eventually, it’s we just need to post it to you’. responsive on mobile. going to be “This is immensely subtle and The survey – which was part ‘what’s my gateway clever. That simple change of of a much bigger UX audit bank?’. Is it Google perspective makes opening an series that explored whether or Facebook or account with Monzo, Revolut the customer experience with some other service? and Starling feel instant, even neobanks was substantially if it really does take a few days better than with traditional Jim Marous to get full access. banks, whether the latter had “You get an immediate feeling moved on significantly and whether the of ownership and success.” former had substance or were just digital Marous believes the pressure on the hype – also found that, of the high street worst-performing banks to up their game operators, only Barclays, Metro Bank, will only intensify. Nationwide and NatWest used digital