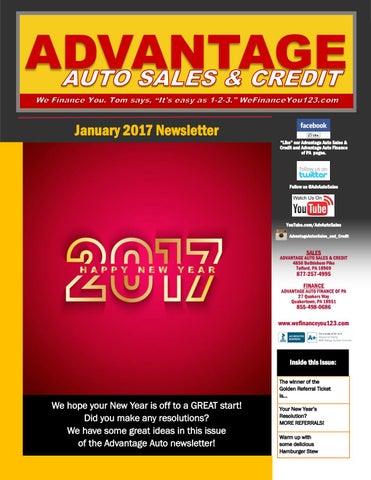 Inside this issue: The winner of the Golden Referral Ticket is...

We hope your New Year is off to a GREAT start! Did you make any resolutions? We have some great ideas in this issue of the Advantage Auto newsletter!

Your New Year’s Resolution? MORE REFERRALS! Warm up with some delicious Hamburger Stew

Nineteen percent of women were more likely to mention being a better person than any other resolution.

The Marist College Institute for Public Opinion released its findings on what Americans have decided as their top resolution for the new year.

For men, being a better person tied with exercising more, at 12 percent.

“Being a better person” topped the list at 16 percent, knocking “weight loss” from the No. 1 spot for the first time since 2014, according to the Marist Poll.

American 45 years of age or older — 21 percent of them — were more likely than younger Americans to resolve to be a better person.

“Exercising more” tied with “weight loss” for second place, at 10 percent, among those who are likely to make a 2017 resolution.

Among those less than 45 years old, there was little consensus, the Marist Poll found. Being a better person and spending less money and saving more each received 11 percent. That was followed by losing weight and exercising more at 9 percent.

Rounding out the top resolutions are “spending less and savi ng more money, ” “improving one’s health” and “eating healthier,” with each getting 7 percent of responses.

The Marist Poll said it was noteworthy that, among those under 30, being a better person edged out exercising 13 percent to 10 percent. Among those 30 to 44 years old, spending less and saving more took the top spot at 16 percent.

Being a better person was important to 21 percent of people living in the West and 16 percent in the South.

Gender, age and geography all made a difference, the poll said.

And just how many Americans were planning to make a resolution?

Make it YOUR New Year’s Resolution to Get More Referrals & Get YOUR Loan PAID OFF!

The golden referral ticket Winner is:

LOAN PAYOFF! Congratulations and THANKS to everyone who participated in this contest.

WELCOME New Members of the Advantage Auto Family! Our Referral Program WORKS. See what it can do for you?

That left a majority — 56 percent — who said they were not likely at all to make a change. More younger Americans were likely to make a New Year’s resolution than their older counterparts, and at least 68 percent of all respondents said they kept at least part of their resolution from 2016.

The Marist Poll sampled 1,005 adults between Dec. 1 and Dec. 9. This article originally appeared in http://patch.com/new-york/yorktown-somers/whats -top-new-years-resolution-2017

Directions: Cook beef and onions over medium heat until meat is no longer pink; drain.

Reduce heat; cover and simmer for 30 minutes or until vegetables and rice are tender.

Uncover; simmer 20-30 minutes longer or until thickened. Freeze in 3cup portions for up to 3 months. 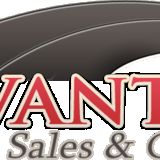 January is all about celebrating our Golden Referral Ticket LOAN PAYOFF Winner and a Fresh Start for 2017!

January is all about celebrating our Golden Referral Ticket LOAN PAYOFF Winner and a Fresh Start for 2017!