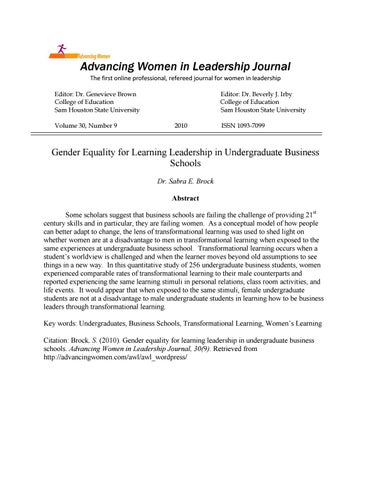 Advancing Women In Leadership Journal Volume 30, 2010 Introduction The face of the business school is changing, reflecting changes in both education and the workforce, notably in technology, global reach and the proportion of women (Jarvis, 2006). Business school graduates are future professionals and organization managers; in these roles they will have to â&amp;#x20AC;&amp;#x153;adapt to changing work environments and demandsâ&amp;#x20AC;? (O&#39;Connor, Bronner, &amp; Delaney, 2002, p. 5) in a workplace where both men and women are nearly equally represented (Wellington, 2001). Business school, the traditional means of preparation for a leadership role in a business career, reflects an increased proportion of women (Merritt, 2004). Women now account for nearly a majority of undergraduate business major graduates, up from 48.6% in 1998 to 49.2% in 2007 (Planty, et al., 2009). Some writers have suggested that the nearly equal balance of men and women in undergraduate business schools may be a more positive environment for teaching 21st century business leadership skills than a predominance of either because it better emulates the workplace (Tanton, 1992; Lewis &amp; Fagenson, 1995). Transformational learning has been shown to be an effective component of leadership among teachers (Harris, Lowery-Moore, &amp; Farrow, 2008), in the operating room (McNaron, 2009), and in executive education (Ciporen, 2009). Undergraduate college students have been found to demonstrate gender differences in learning styles with women more likely to display listening behaviors and value peers as collaborators, while men show an active approach to learning and to use peers for testing achievement, but these differences may diminish with maturity (Baxter Magolda, 1992). However, women in mid-career have shown more receptivity to learning elements such as talk and reflection (Carter, 2002) and females, in general, may benefit from more social support than males (Taylor, Klein, Lewis, Gruenwald, Gurung, &amp; Updegraff, 2000). Undergraduate female students have also indicated less receptivity to learning through competitive activities (Gneezy, Niederle, &amp; Rustichini, 2003), making competition a negative factor insofar as workplace promotion is based on competition (Schrage, 2008), and women tend to benefit from a more cooperative atmosphere (Mason, 2009). Students expect that investment in a business school education will change the way they look at the world, as well as provide the specific capabilities demanded for leadership in an increasingly complex and changing workplace (Gammie, 1994). At the same time, the workplace calls on business education to provide capabilities once thought to be more characteristic of women such as teamwork and collaboration (Buttner, 2001; Gardner &amp; Korth, 1998; Tschannen-Moran, Uline, Woolfolk Hoy, &amp; Mackley, 2000), relationship building (Gersick, Bartunek, &amp; Dutton, 2000; Rojewski, 2002), as well as communication skills (Whetton &amp; Cameron, 2006). Some scholars have indicated that business schools are failing the challenge of providing 21st century skills (Pfeffer &amp; Fong, 2001; Vinten, 2000), especially in improving interpersonal ability and communication skills (Pfeffer &amp; Fong, 2001), and in particular failing women (Bilimoria, 1999; Bilimoria, Joy, &amp; Liang, 2008; Mavin &amp; Bryans, 1999). Specifically, females are disadvantaged at organizational, faculty, and curricular levels of business schools: (a) an organizational structure that may inculcate habits and practices of inequality like the unconscious 2

Support of other student

Death of loved one

Additional statistical analysis to answer Research Question 3 was done via two t-tests to determine the relationship of the incidence of transformational learning and the varieties of different types learning activities reported by both men and women. Table 3 displays the results of this analysis. Table 3 Differences in Variety of Learning Activities Reported by Gender Base = 125 who reported transformational learning 6

Advancing Women In Leadership Journal Volume 30, 2010 one of 15 classroom assignments (and 28 learning activities) found to be more important for one gender than the other, it is attributed to chance, rather than a real relationship. There was a possibility that the finding may be related to the greater need for late teen-aged boys to assert their identities (Younger &amp; Warrington, 2005), but their study was not designed to measure that connection. Also, there was no other support found in the literature to indicate that writing about concerns should impact transformational learning more in men than women. If anything, studies have shown women more receptive to use of writing as a learning technique (Howard, 2000). The responses to open-ended questions in this study gave some possible explanation of the difference in response to competition between men and women found by other researchers (Gneezy, Niederle, &amp; Rustichini, 2003). These answers seemed to indicate men may be more used to thriving on competition, whereas women need to contextualize competition to see it as a positive. For example, one male student said that this school “is fierce in competition and constantly moves me to forward. In this atmosphere, one is more future-driven than before.” Or as another young man said, “I realized that if it were not for the competitive nature of the school and the city, I would not have been as motivated in my studies... I have adopted a more serious tone in all aspects of my life.” Another young male student said that with competition, “I began to see that I needed to raise my expectations and work much harder than I ever have before.” Another combined friendship and competitiveness, “My friends in [this school] are all hardworking and smart; so, I feel like I am competing with them. This has improved my skills and perspective.” While many of the female students reported a positive reaction to competition, they appeared to have expanded definitions of what competition is. For example, one woman said, “This is a mature, thought-provoking setting in which we are all hammered by different presences. Diversity in thoughts provided me with the motivation to change and be openminded.” Another female student said more simply, “I was put in a place with high achievers and this influenced me to raise my own expectations.” Another young woman was perhaps more typical of other female students in her openness, “I knew coming to college means exposing myself to a myriad of ideas. I&#39;m fine with that and I&#39;m willing to change if I find the new ideas more applicable and convincing.” Some female students just observed competitiveness as part of the environment, saying this school is “very fast paced (as is [this city]) as well as competitive and there are the students [who] have very strong character, including the women.” Another said, “Each person is for himself in school. No one will look after you. I must take responsibility to organize my academic time, social time, and relaxing time.” And another, “I realized that starting now, I need to be more responsible and dedicate more time to what should be my higher priorities to help me prepare for the future.” Women may process competition differently than men, adding a frame of reference, whereas men appear to “main line” it. When planning classroom activities that include competition, instructors may want to allow sufficient processing time and perhaps discussion for those who need it. Recommendations and Implications for Future Research Embed a Variety of Types of Classroom Assignments

Advancing Women In Leadership Journal Volume 30, 2010 Differences in female and male conceptions of competitiveness would seem to underscore the need for a variety of learning approaches be available to undergraduate business school students, realizing men and women may react differently to various learning approaches (as certainly do students with different learning styles). This study showed that there is a special value in the writing about concerns, the challenge of a teacher, and the support of peers and teachers to the emergence of transformational learning. Treat Men and Women the Same Both Consciously and Unconsciously. In assuring women get equal exposure to learning experiences, teachers may also check their own expectations about equal performance despite the studentâ&amp;#x20AC;&amp;#x2122;s gender. Teachers are encouraged to be aware of modifications in their own teaching style to male and female students. The conclusion is to treat both genders equally in the classroom. Connect Class Assignments and Exercises to the Broader Student Experience. Moving is especially characteristics of this and many undergraduate populations. Realizing that students are especially open to redecorating their environments can also be extended to their exploration of new mental frameworks, diverse peer groups and expanded ways to view their worlds. Implications for Future Research What was it about these young women that they were open to transformational learning in apparently the same way as men in this undergraduate business school? It may be possible, as some observers have suggested, that these women were more diligent in their approach to college than counterpart men (Lewin, 2006) and made up for any disadvantage in the business school structure. Further, to be asked, what was it about the educational experience at this particular undergraduate business school that encouraged a fairly high rate of transformational learning among both the men and women who were students there? It may have been the particular nature of the student body. These students may have been more similar to each other than even other males and females in a typical undergraduate population. These students selfselected to apply to a business school and to this highly-ranked business school in a very urban and stressful environment, acknowledged to have a highly competitive student body (Lavalle, Gerdes et al. 2006). They may also be particular in that many are seeking to mold themselves to careers that reward fast reaction to change, e.g., Wall St. and investment banking (School Website, 2005). Therefore, both the men and women who attend this school might be similar on characteristics affecting their openness to transformational learning, which has been cited as a conceptual model descriptive of openness to change (Cranton, 1994). Many other questions remain unanswered. For example, do the number of exposures to any particular learning activity relate to the likelihood of transformational learning among either women or men? Does the particularly competitive nature of this research site, with its low acceptance rate, mean that a particular subset of students, especially women, attend this undergraduate business school? Would results replicate in lower tier undergraduate business schools? For that matter, is the business major more or less likely to be open to transformational 9

Advancing Women In Leadership Journal Volume 30, 2010 learning as other majors? Would equality of transformational learning between genders continue to MBAs and to the workplace? As women in the workplace occupy fewer top management positions, why does a gender difference in transformational learning show itself once college is left behind? Teachers may have found a way to create equivalent expectations and learning experiences such that male and female students equally report experiencing transformational learning. It may be that there are lessons to be applied to the organizations where these students find employment. Future research could address some of these questions and determine whether most women and men are emerging from undergraduate business school education with equivalent leadership skills to succeed in business careers.

Biography Sabra Brock, Ph.D., is a professor, researcher, writer, and management trainer. She teaches marketing and management to undergraduates at Touro College in New York City and is Dean of their German campus. She can be reached at Sabra.Brock@Touro.edu.