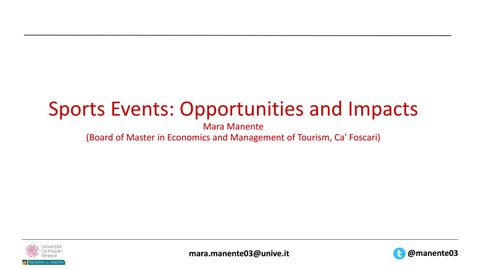 Sports Events: Opportunities and Impacts Mara Manente (Board of Master in Economics and Management of Tourism, Ca&#39; Foscari)

Agenda ❖ Sports Events: the different perspectives ❖ Identifying the impacts ❖ The importance of measuring and monitor ❖ Torino 2006 ❖ Lessons from the economic side ❖ Factors for success

EVENT AS D4D Tool to be used in the process of development for destinations mara.manente03@unive.it

Sustainability conditions to be guaranteed @manente03

The different perspectives Participants and Attendees

•Attracting financial, technical and project resources •Creation/strengthening of trade relations •Added value and employment activated by expenditure levels (participants and process) and ex-post use of infrastructure

… the importance of measuring and monitor … (1) Impact

… the importance to measure and monitor … (2) Impact

Satisfaction rate of residents and other stakeholders Var. % n. associations, groups, networks between local stakeholders Pressure of the visitors of the event (n. visitors per inhabitant) Adherence to environmental certifications

N. buildings, infrastructure, etc. built for the event and no longer reused Concentration of visitors to the event (n. visitors to Km²)

… the importance to measure and monitor … (3) Impact

% local residents and stakeholders who feel more proud to live in the destination, thanks to the event.

The impact analyses estimate an added value of EUR 13 billion for Piedmont and about 17 billion for Italy in the period 20052009 deriving from the OlympicGames.

They also estimate an average annual contribution of about 1 percentage point to Italian GDP and 3 percentage points to regional GDP between 2005 and 2009. Source: CISET calculations from published official reports by the organising body and direct interviews

Satisfaction rate of residents and other stakeholders

N. Buildings/ infrastructure built for event and no longer reused

Several facilities no longer in use

% visitors for which the event exceeded expectations

% local stakeholders who have an image positive of the destination

% visitors who would come back to Turin

% residents according to which the event contributed positively to the city

More than other Winter Olympics. Volunteers from Piedmont, Italy and 55 other countries

It was 81% before the event N.B. Only available indicators included Source: CISET processing from official reports published by the organizing body and direct interviews

Lessons from the economic side

• Each € invested in renovations and construction of new infrastructure/facilities (&quot;hard&quot; investments) mobilizes about € 1.4 in the economic system, able to contribute to the increase in GDP by a few percentage points .

• The resources activated by the hard investment spread in a very wide territory: extra-regional and even national. • Only the effect of visitor spending remains more localized.

New services for the community

• The event is an opportunity to attract investment, to build/complete infrastructure and services for the community (e.g. mobility network, road links, etc.).

Lessons from the economic side

â&amp;#x20AC;˘ ÂŤDemand Crowding out effect&quot;: potential visitors might give up the visit due to factors such as congestion risk - rising prices, etc.

General overestimate of the number of visitors especially overnight stays â&amp;#x20AC;˘ Possible &quot;Substitution effect&quot; on purchased goods and services: favouring some purchases at the expense of others

How to get more from visitors? Some considerations on direct expenditure of visitors: • The direct economic impact varies depending on the visitors origin and their willingness to spend in the territory • Distinguish between visitors to the event and those who actually bear additional expenses for the economic system • Successful events are able to encourage participants and visitors not only to enjoy the services on site, but also to overnight in the area for several days, generating additional direct expenditure and added value. • In a long-term perspective, those events that manage to be a «reason for visiting» the destination and a «reason to come back in the future» are winning.

Citizens are the first ambassadors of the destination 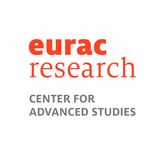