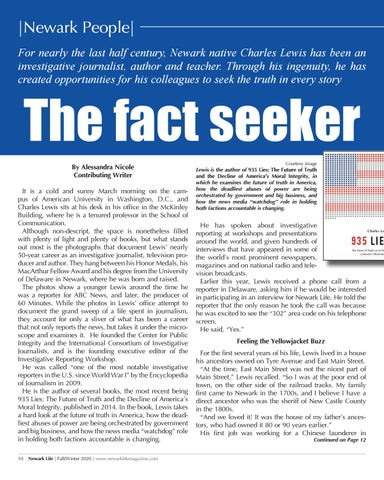 |Newark People| For nearly the last half century, Newark native Charles Lewis has been an investigative journalist, author and teacher. Through his ingenuity, he has created opportunities for his colleagues to seek the truth in every story

The fact seeker By Alessandra Nicole Contributing Writer It is a cold and sunny March morning on the campus of American University in Washington, D.C., and Charles Lewis sits at his desk in his office in the McKinley Building, where he is a tenured professor in the School of Communication. Although non-descript, the space is nonetheless filled with plenty of light and plenty of books, but what stands out most is the photographs that document Lewis’ nearly 50-year career as an investigative journalist, television producer and author. They hang between his Honor Medals, his MacArthur Fellow Award and his degree from the University of Delaware in Newark, where he was born and raised. The photos show a younger Lewis around the time he was a reporter for ABC News, and later, the producer of 60 Minutes. While the photos in Lewis’ office attempt to document the grand sweep of a life spent in journalism, they account for only a sliver of what has been a career that not only reports the news, but takes it under the microscope and examines it. He founded the Center for Public Integrity and the International Consortium of Investigative Journalists, and is the founding executive editor of the Investigative Reporting Workshop. He was called “one of the most notable investigative reporters in the U.S. since World War I” by the Encyclopedia of Journalism in 2009. He is the author of several books, the most recent being 935 Lies: The Future of Truth and the Decline of America’s Moral Integrity, published in 2014. In the book, Lewis takes a hard look at the future of truth in America, how the deadliest abuses of power are being orchestrated by government and big business, and how the news media “watchdog” role in holding both factions accountable is changing. 10

Lewis is the author of 935 Lies: The Future of Truth and the Decline of America’s Moral Integrity, in which he examines the future of truth in America, how the deadliest abuses of power are being orchestrated by government and big business, and how the news media “watchdog” role in holding both factions accountable is changing.

He has spoken about investigative reporting at workshops and presentations around the world, and given hundreds of interviews that have appeared in some of the world’s most prominent newspapers, magazines and on national radio and television broadcasts. Earlier this year, Lewis received a phone call from a reporter in Delaware, asking him if he would be interested in participating in an interview for Newark Life. He told the reporter that the only reason he took the call was because he was excited to see the “302” area code on his telephone screen. He said, “Yes.” Feeling the Yellowjacket Buzz For the first several years of his life, Lewis lived in a house his ancestors owned on Tyre Avenue and East Main Street. “At the time, East Main Street was not the nicest part of Main Street,” Lewis recalled. “So I was at the poor end of town, on the other side of the railroad tracks. My family first came to Newark in the 1700s, and I believe I have a direct ancestor who was the sheriff of New Castle County in the 1800s. “And we loved it! It was the house of my father’s ancestors, who had owned it 80 or 90 years earlier.” His first job was working for a Chinese launderer in Continued on Page 12