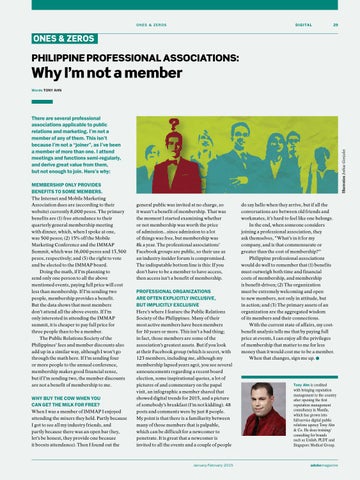 Why I’m not a member Words TONY AHN

There are several professional associations applicable to public relations and marketing. I’m not a member of any of them. This isn’t because I’m not a “joiner”, as I’ve been a member of more than one. I attend meetings and functions semi-regularly, and derive great value from them, but not enough to join. Here’s why: MEMBERSHIP ONLY PROVIDES BENEFITS TO SOME MEMBERS.

The Internet and Mobile Marketing Association dues are (according to their website) currently 8,000 pesos. The primary benefits are (1) free attendance to their quarterly general membership meeting with dinner, which, when I spoke at one, was 500 pesos; (2) 15% off the Mobile Marketing Conference and the IMMAP Summit, which was 16,000 pesos and 13,500 pesos, respectively; and (3) the right to vote and be elected to the IMMAP board. Doing the math, if I’m planning to send only one person to all the above mentioned events, paying full price will cost less than membership. If I’m sending two people, membership provides a benefit. But the data shows that most members don’t attend all the above events. If I’m only interested in attending the IMMAP summit, it is cheaper to pay full price for three people than to be a member. The Public Relations Society of the Philippines’ fees and member discounts also add up in a similar way, although I won’t go through the math here. If I’m sending four or more people to the annual conference, membership makes good financial sense, but if I’m sending two, the member discounts are not a benefit of membership to me. WHY BUY THE COW WHEN YOU CAN GET THE MILK FOR FREE?

When I was a member of IMMAP I enjoyed attending the mixers they held. Partly because I got to see all my industry friends, and partly because there was an open bar (hey, let’s be honest, they provide one because it boosts attendance). Then I found out the

general public was invited at no charge, so it wasn’t a benefit of membership. That was the moment I started examining whether or not membership was worth the price of admission...since admission to a lot of things was free, but membership was 8k a year. The professional associations’ Facebook groups are public, so their use as an industry-insider forum is compromised. The indisputable bottom line is this: If you don’t have to be a member to have access, then access isn’t a benefit of membership. PROFESSIONAL ORGANIZATIONS ARE OFTEN EXPLICITLY INCLUSIVE, BUT IMPLICITLY EXCLUSIVE

Here’s where I feature the Public Relations Society of the Philippines. Many of their most active members have been members for 10 years or more. This isn’t a bad thing; in fact, those members are some of the association’s greatest assets. But if you look at their Facebook group (which is secret, with 123 members, including me, although my membership lapsed years ago), you see several announcements regarding a recent board election, some inspirational quotes, a lot of pictures of and commentary on the papal visit, an infographic a member shared that showed digital trends for 2015, and a picture of somebody’s breakfast (I’m not kidding). 48 posts and comments were by just 8 people. My point is that there is a familiarity between many of those members that is palpable, which can be difficult for a newcomer to penetrate. It is great that a newcomer is invited to all the events and a couple of people

do say hello when they arrive, but if all the conversations are between old friends and workmates, it’s hard to feel like one belongs. In the end, when someone considers joining a professional association, they ask themselves, “What’s in it for my company, and is that commensurate or greater than the cost of membership?” Philippine professional associations would do well to remember that (1) benefits must outweigh both time and financial costs of membership, and membership is benefit-driven; (2) The organization must be extremely welcoming and open to new members, not only in attitude, but in action; and (3) The primary assets of an organization are the aggregated wisdom of its members and their connections. With the current state of affairs, my costbenefit analysis tells me that by paying full price at events, I can enjoy all the privileges of membership that matter to me for less money than it would cost me to be a member. When that changes, sign me up.

Tony Ahn is credited with bringing reputation management to the country after opening the first reputation management consultancy in Manila, which has grown into full-service digital public relations agency Tony Ahn & Co. He does training/ consulting for brands such as Unilab, PLDT and Singapore Medical Group. 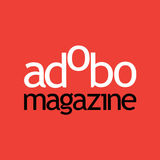