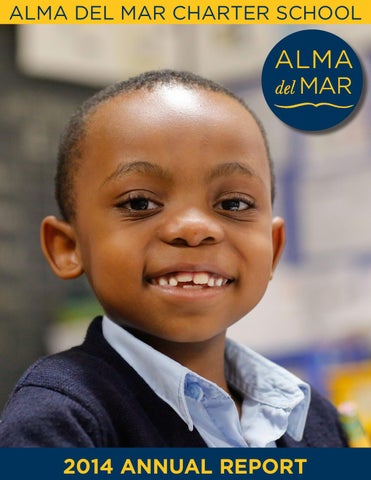 Dear Friends, Alma del Mar (“Soul of the Sea”) began with a group of us who were driven by a set of shared beliefs, among them that kids in the City of New Bedford are just as capable as kids anywhere and, that given the opportunity, they will become the leaders that this city and this world so desperately needs. We called on you - our supporters and friends, near and far - and you joined us in acting on those beliefs.

As Alma enters its fourth year, we do so as a school with a cohesive model, strong culture and a growing track record that attests to the power of those original beliefs. We now know that when we combine the best practices of “no excuses” urban charter schools with Expeditionary Learning’s in-depth approach to teaching content, we see brilliant results. By traditional measures, our scholars are proving that they are no less capable than their more affluent peers. This past year’s third graders outperformed not only the state average on the math MCAS, but also most of the surrounding suburbs. Another measure of our scholars’ achievement is the high quality of the work they produce here. Anyone who reads our Kindergartners’ field guide to vernal pools, available at the Buzzards Bay Coalition Center downtown, is astounded by our young authors’ depth of knowledge and the level of detail in their scientific drawing (see Belief 4 for more examples of this kind of work).

As we look to the year ahead, we are focused on building Alma into an institution that outlasts any individual here today and that guides every single one of our scholars to high achievement. For our academic program, that means addressing our identified gaps. Many of our scholars, especially those in our lead cohort, are not yet strong enough writers to effectively communicate their increasingly sophisticated thinking. That’s why this year we’re increasing the emphasis on expository writing based on high level texts throughout our curriculum. From an organizational standpoint, building a lasting institution will mean further investment in our incredible teaching talent. By rapidly developing our new teachers and providing meaningful opportunities for our veterans to grow and lead, we will add to our phenomenal teaching team and build a deep bench for the future. Operationally, the year ahead holds the challenge of expanding our facilities to ensure we can provide space for our school as we nearly double in size over the next three years. We are excited about our recent purchase of our school building and its 2.3 acres of land, which is the first important step toward our long-term expansion. We are pleased to present to you our Annual Report for the 2013 - 2014 school year. In it we’ve distilled our work down to Six Beliefs in Action. These are the guiding principles that make Alma the incredible school that it is today and the beacon that lights the way forward for the next part of our journey. If you have been with us these past three years, thank you for acting on your belief in the potential of our scholars. If you are new to Alma, let this report be an invitation to join our “crew.” The scholars and families on these pages look forward to your continued support as we commit to the challenging and fulfilling work ahead. Sincerely,

Will Gardner Chris Arnold Executive Director Chair, Board of Trustees

New Bedford kids can achieve at the same level as kids anywhere.

Many believe that the correlation between high poverty and low academic achievement is immutable. At Alma, we challenge that belief. For our scholars, zip code does not determine destiny. Results of the 2013-2014 MCAS show that Alma scholars are already outperforming their peers in New Bedford and are performing on par with students in more affluent areas.

of our scholars will be the first in their family to graduate from a 4-year college.

Alma fourth graders outperformed their New Bedford peers by 14% in Math and 12% in Literacy.**

An inclusive school is a stronger school.

It is too often the case that those students with the greatest needs have been denied access to the most rigorous schools. Alma is a high quality educational option for those families who have traditionally had no other option but a failing neighborhood school. 79% of our scholars come from lowincome families. Our percentage of English Language Learners is more than twice the local district average. And once our families experience education at Alma, they stay with us. Last year, our rate of attrition was less than 4%, far lower than most comparable urban charter schools.

Our teachers become great through hard work and practice. Great teachers are not born; they are made. With this in mind, we invest heavily in the support and training of our teaching talent. Alma teachers receive weekly one-on-one coaching meetings and feedback. In addition, our teachers receive 1 1/2 hours of targeted training every week. Our Associate Teacher Program develops newer teachers by allowing them to gradually take on more responsibilities alongside veteran colleagues.

“We chose not to leave New Bedford because of Alma.

We were going to move, but then my son started at Alma. It’s such a wonderful school. I’m so thrilled with what he’s learned and how well he’s done. Alma del Mar is helping him become a well-rounded student and a well-rounded person.”

â&amp;#x20AC;&amp;#x153;I started out as an Associate Teacher. The program offered me an opportunity to learn and be mentored by other classroom teachers. I thought this was an incredible opportunity for my development and growth as a teacher. I was observed and was provided with tons of feedback so that I could continue to get better. I gained much confidence in the classroom because the teachers were all so positive and supportive. The program gradually prepares you to take on a Lead position by the end of the year. You learn each day and take on responsibilities a little at a time. I hope that all of my students continue to be motivated to go above and beyond, to reach for their dreams, to live the life they all hope for.â&amp;#x20AC;?

The work scholars do today matters.

In many schools, the student work ends up in the recycling bin at the end of the day. At Alma del Mar, we expect every scholar to do work of which they are truly proud. Our scholars complete multiple drafts of essays, critiquing each othersâ&amp;#x20AC;&amp;#x2122; work in order to improve its quality. We focus on real work.First graders learn about argumentative writing and then write letters to elected officials to advocate for change in their communities. Fourth graders study the Holocaust and then explore the role of stereotypes and prejudice in society. Our scholars do their best work because they know that it will be important to an audience beyond their classroom.

Alma scholars are also artists and musicians. They study great painters such as Rothko, van Gogh and Warhol, and then create works in their style. They packed Gallery X downtown with an exhibit of their sculptures, watercolors, oil pastels, and pencil sketches. Music instruction begins in kindergarten and intensifies in 3rd grade, when every one of our scholars has the opportunity to take up a string instrument.

Self Portrait in the Style of Vincent van Gogh, Katherine Veenstra, second grade

In 2014, The Massachusetts Department of Elementary &amp; Secondary Education named Alma del Mar a model school in the areas of Access and Equity, and Culture and Family Engagement.

Parents care. It’s our job to engage them.

At Alma, we’ve found that the secret to having engaged parents is to meet them where they are. That means we start the year by conducting home visits with every one of our families. With their school-issued cellphones, our teachers are on call every night. Parents and scholars don’t hesitate to call or text with even the smallest questions. Many of our parents also engage in service at Alma. Whether they are organizing uniform swaps, introducing new families to Alma with a pancake breakfast or attending our weekly Town Hall assembly, our parents model our mission of cultivating service-minded leaders.

“I truly feel blessed to have the opportunity to send my children to a school where they are not only receiving an excellent education, but are being mentored by a remarkable team of caring teachers and staff. Thank you, Alma del Mar, for everything you do for our children and for helping to ensure they have a bright future ahead of them!” - Tracy Setzler Sylvia, mother of Ryleigh and Morgan, ‘27

We sincerely apologize if anyone has inadvertantly been omitted from the lists contained on this or any of the following pages.

Alma del Mar greatly appreciates the support of volunteers. Volunteers fill many important roles in the Alma community, including assisting with office tasks, helping in the after school program, and serving as mentors.

Our mentors play a vital role in the social, emotional and academic development of our scholars. Mentors are volunteers from the community who meet weekly with the same scholar after school and develop a strong relationship with them over the course of the year.

The mentoring program is designed to reinforce what our scholars need most: the mindset and skills to be successful. Mentors act as an additional caring adult in scholarsâ&amp;#x20AC;&amp;#x2122; lives and provide them with crucial academic support. The relationship mentors form with their scholars will help scholars build their selfesteem and belief in their own potential.

For more information about our mentoring program, contact Cara Beller at carabeller@almadelmar.org.

Thank you for all you do for our scholars!

The cost of educating an Alma scholar this past year was approximately $13,750, excluding capital expenses. The public funding received was roughly $11,750 for each student. This left a funding gap of $2,000 per pupil, generously donated by private donors and foundations.

BOARD OF TRUSTEES Chair: Chris Arnold