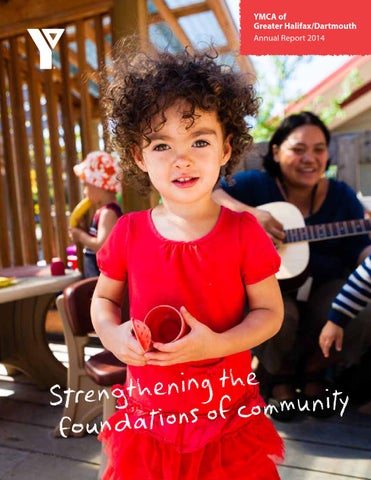 To learn more about the new YMCA Centre of Community click here.

from the Chair of the Board of Directors

and the Interim President and Chief Executive Officer

In 2014, your YMCA made a difference. Serving your community as we have for the past 161 years, your YMCA is constantly adapting and taking action to help people of all ages, ability, social and economic backgrounds. We help them reach their potential and strengthen the foundations of our community.

Our help is needed. Our citizens today face challenging physical and emotional health issues. We also know that despite all of our digital connectedness, many people, young and old, experience a growing sense of isolation. Fragmentation within our society places negative focus on differences, instead of on how much we are all the same in so many ways.

and on May 30, 2014, the doors were closed for the last time, and the property was sold. It was a strategic business decision, but also, an emotional farewell. YMCA Senior Volunteers, Staff and Counsel continue to work on the development and design of the new YMCA, securing charitable support for this legacy project. As we move forward, there will be many opportunities for the community to get involved.

In times like these, it becomes increasing clear that the YMCA is needed now more than ever.

Whether it is caring for young children, teaching a new skill, listening with empathy, providing safe places or opening doors when others might have closed, the work of the YMCA takes the commitment and passion of many people. As we close 2014, we extend our thanks for the tireless efforts of over 400 YMCA volunteers and 200 YMCA staff that have helped to build a stronger YMCA.

Released in February 2014, Now or Never: An Urgent Call to Action for Nova Scotians sounded a clear alarm: Nova Scotians must act now for a better, more prosperous tomorrow. The contributions of the YMCA align with this call to action, and will continue to do so in the coming years. As just one example, together, and with a shared commitment to grow our economy, your YMCA has partnered with the Province to leverage existing resources and expertise in immigration to offer YREACH, a provincial program supporting families who have recently immigrated to Nova Scotia. Your YMCA is focused on solutions, community building and engaging citizens of all ages, backgrounds and abilities, to help shape a better future for all. In 2014, your YMCA strengthened its reach and impact, not only in Halifax, but also across the province. Our provincial and local programming puts a focus on inclusion and diversity, connecting and impacting the lives of thousands.

Without the generous philanthropic support of individuals and the corporate community, we would be limited in ensuring affordable access to all. Our heartfelt thanks to our funding partners who help extend the hand of our YMCA, and also to the more than 56,000 citizens who have been involved with the YMCA over the past year. Each of you contributes to the wellbeing and spirit of this organization. In early 2015, our President and CEO announced her resignation. We thank Bette Watson-Borg for nearly 15 years of dedicated service and commitment to this organization. With the support of YMCA Canada, our YMCA Board of Directors will work toward the hiring of the new President and CEO.

Most significantly, we have an exciting plan to build a vibrant, new, state-of-the-art YMCA Centre of Community facility in Halifax. It will serve as the beating heart of your YMCA, bracing the entire organization. Our vision is one for a YMCA that will help to contribute to a stronger economy - aligning with municipal and provincial plans to increase jobs, encourage economic growth and contribute to long-term prosperity. Itâ&#x20AC;&#x2122;s just one more example of how we have a role in the tomorrow the Now or Never report envisions.

A strong foundation is in place for the YMCA and the future looks promising. We look forward to an exciting future ahead, involving and positively impacting more people than ever before.

The new YMCA Centre of Community facility will reinforce and encourage major development in Halifax, contributing to economic advancements. It will strengthen community fabrics across the Halifax region. It will greatly increase our ability to improve the lives of tens of thousands more people a year, for the next 60 years, and with legacy, will impact well beyond its physical life.

Chair, YMCA Board of Directors

At the same time, in 2014, we said farewell to the South Park YMCA. This facility served our community for over 60 years

John Sr. joined the Board of Directors of the YMCA in the early 1960’s and remained as a Director until 1971. He actively participated in every YMCA fundraising campaign from 1970 to the time of his passing in 2006. John loved his exercise class at the South Park YMCA, and was one of its original members. Friends recall that for John “the class” took precedence over virtually all other daily demands and in his eyes, attendance “was not optional,” but rather, a solemn duty. In fact, if other regulars missed class too often, John quickly and passionately intervened to return the wayward sheep to the flock. In 1984 John became the first recipient of the Halifax YMCA Red Triangle Award for outstanding community service. In 2005 he was appointed to the YMCA Fellowship of Honor in a ceremony on Parliament Hill. On November 27, 2014, the Lindsay family announced a $3 million donation to the Campaign for the new YMCA Centre of Community. In recognition of this incredibly generous gift, the YMCA will honour John Lindsay Sr. by naming the new facility the “John W. Lindsay YMCA.”

“My father believed in the YMCA, where he was a volunteer, a member, an ambassador, a philanthropist and a perennial steward for over 40 years.” - John Lindsay Jr.

Slated to open in 2018 and in collaboration with key private and public partners, the new John W. Lindsay YMCA will be a vibrant, new, state-of-the-art YMCA Centre of Community facility in Halifax, housed within a beautiful, mixed-use residential and commercial complex. The John W. Lindsay YMCA will serve as the beating heart of your YMCA, strengthening the entire organization to enable us to improve the quality of life for tens of thousands more children, youth, adults and families who need us.

The John W. Lindsay YMCA will help our YMCA build a healthier community for all our citizens. The new facility will enable us to improve health outcomes; support the development of healthy children and youth; provide increased support for an aging population; strengthen the economy through job creation, economic growth and long-term prosperity; and reduce our environmental footprint through a commitment to environmental sustainability and education.

Led and supported by committed and generous community leaders and YMCA friends, our YMCA Centre of Community Capital Campaign will raise $9 million in private sector charitable support. The balance of this $30 million dollar project will comprise proceeds from the sale of the former South Park YMCA property, funding from government partners, and revenue generated from the increase in YMCA operations that will result from a new, expanded and state-of-the-art facility. www.ymcahrm.ns.ca/centreofcommunity

2014 YMCA Board of Honorary Trustees The Honourable Alan R. Abraham

Campaign Supporters YMCA Strong Kids provides financial assistance to children, youth and families who are willing, yet unable, to afford the full cost of participation in a YMCA program or activity. Thank you to all of our 2014 YMCA Strong Kids Campaign supporters. Because of you, every child has a chance to reach their full potential.

* = YMCA Centre of Community Capital Campaign * = In Honour/In Memory Of

2014 Big Cove YMCA Camp Supporters We believe that an experience that lasts a lifetime should be available to all children. Our Big Cove YMCA Camp supporters who generously donate to the Big Cove Campership Fund make it possible for every child to have the opportunity to attend summer camp.

“I want to thank and congratulate the Y for making this experience available at a reduced rate to families through Strong Kids whose children would otherwise not be able to attend.” - Parent & Big Cove YMCA Campership Fund Recipient

An experience that lasts a lifetime !

Excess of (expenses over revenue) revenue over expenses

Amortization and other operating expenses

Provide your time, talent or treasure ! Please join us in building the foundations of a strong and vibrant community. Strengthening the Foundations of Community

Strengthening the Foundations of Community