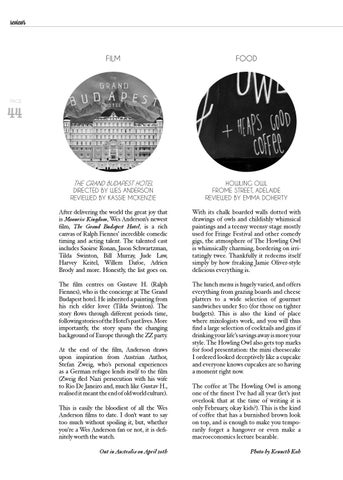 With its chalk boarded walls dotted with drawings of owls and childishly whimsical paintings and a teensy weensy stage mostly used for Fringe Festival and other comedy gigs, the atmosphere of The Howling Owl is whimsically charming, bordering on irritatingly twee. Thankfully it redeems itself simply by how freaking Jamie Oliver-style delicious everything is.

The film centres on Gustave H. (Ralph Fiennes), who is the concierge at The Grand Budapest hotel. He inherited a painting from his rich elder lover (Tilda Swinton). The story flows through different periods time, following stories of the Hotel’s past lives. More importantly, the story spans the changing background of Europe through the ZZ party.

The lunch menu is hugely varied, and offers everything from grazing boards and cheese platters to a wide selection of gourmet sandwiches under $10 (for those on tighter budgets). This is also the kind of place where mixologists work, and you will thus find a large selection of cocktails and gins if drinking your life’s savings away is more your style. The Howling Owl also gets top marks for food presentation: the mini cheesecake I ordered looked deceptively like a cupcake and everyone knows cupcakes are so having a moment right now.

At the end of the film, Anderson draws upon inspiration from Austrian Author, Stefan Zweig, who’s personal experiences as a German refugee lends itself to the film (Zweig fled Nazi persecution with his wife to Rio De Janeiro and, much like Gustav H., realised it meant the end of old world culture). This is easily the bloodiest of all the Wes Anderson films to date. I don’t want to say too much without spoiling it, but, whether you’re a Wes Anderson fan or not, it is definitely worth the watch.

The coffee at The Howling Owl is among one of the finest I’ve had all year (let’s just overlook that at the time of writing it is only February, okay kids?). This is the kind of coffee that has a burnished brown look on top, and is enough to make you temporarily forget a hangover or even make a macroeconomics lecture bearable.

Out in Australia on April 10th

INSIDE: Face-blindness, Defence Force at universities, Abbott and the ABC, CFS, Beyonce, Biscuits.

INSIDE: Face-blindness, Defence Force at universities, Abbott and the ABC, CFS, Beyonce, Biscuits.