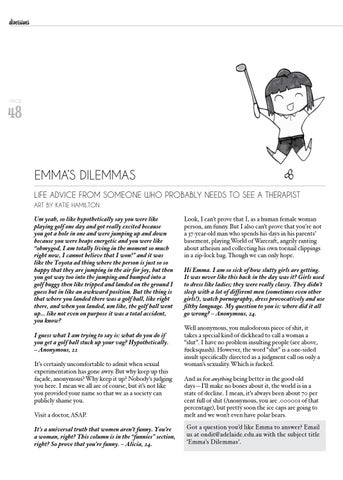 emma’s dilemmas Life advice from someone who probably needs to see a therapist ART BY KATIE HAMILTON Um yeah, so like hypothetically say you were like playing golf one day and got really excited because you got a hole in one and were jumping up and down because you were heaps energetic and you were like “ohmygod, I am totally living in the moment so much right now, I cannot believe that I won!” and it was like the Toyota ad thing where the person is just so so happy that they are jumping in the air for joy, but then you got way too into the jumping and bumped into a golf buggy then like tripped and landed on the ground I guess but in like an awkward position. But the thing is that where you landed there was a golf ball, like right there, and when you landed, um like, the golf ball went up… like not even on purpose it was a total accident, you know? I guess what I am trying to say is: what do you do if you get a golf ball stuck up your vag? Hypothetically. – Anonymous, 22 It’s certainly uncomfortable to admit when sexual experimentation has gone awry. But why keep up this façade, anonymous? Why keep it up? Nobody’s judging you here. I mean we all are of course, but it’s not like you provided your name so that we as a society can publicly shame you. Visit a doctor, ASAP. It’s a universal truth that women aren’t funny. You’re a woman, right? This column is in the “funnies” section, right? So prove that you’re funny. – Alicia, 24.

Look, I can’t prove that I, as a human female woman person, am funny. But I also can’t prove that you’re not a 37-year-old man who spends his days in his parents’ basement, playing World of Warcraft, angrily ranting about atheism and collecting his own toenail clippings in a zip-lock bag. Though we can only hope. Hi Emma. I am so sick of how slutty girls are getting. It was never like this back in the day was it? Girls used to dress like ladies; they were really classy. They didn’t sleep with a lot of different men (sometimes even other girls!), watch pornography, dress provocatively and use filthy language. My question to you is: where did it all go wrong? – Anonymous, 24. Well anonymous, you malodorous piece of shit, it takes a special kind of dickhead to call a woman a “slut”. I have no problem insulting people (see above, fucksquash). However, the word “slut” is a one-sided insult specifically directed as a judgment call on only a woman’s sexuality. Which is fucked. And as for anything being better in the good old days—I’ll make no bones about it, the world is in a state of decline. I mean, it’s always been about 70 per cent full of shit (Anonymous, you are .000001 of that percentage), but pretty soon the ice caps are going to melt and we won’t even have polar bears. Got a question you’d like Emma to answer? Email us at ondit@adelaide.edu.au with the subject title ‘Emma’s Dilemmas’.