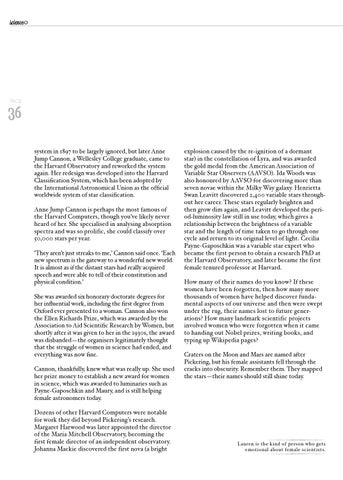 system in 1897 to be largely ignored, but later Anne Jump Cannon, a Wellesley College graduate, came to the Harvard Observatory and reworked the system again. Her redesign was developed into the Harvard Classification System, which has been adopted by the International Astronomical Union as the official worldwide system of star classification. Anne Jump Cannon is perhaps the most famous of the Harvard Computers, though you’ve likely never heard of her. She specialised in analysing absorption spectra and was so prolific, she could classify over 50,000 stars per year. ‘They aren’t just streaks to me,’ Cannon said once. ‘Each new spectrum is the gateway to a wonderful new world. It is almost as if the distant stars had really acquired speech and were able to tell of their constitution and physical condition.’ She was awarded six honorary doctorate degrees for her influential work, including the first degree from Oxford ever presented to a woman. Cannon also won the Ellen Richards Prize, which was awarded by the Association to Aid Scientific Research by Women, but shortly after it was given to her in the 1930s, the award was disbanded—the organisers legitimately thought that the struggle of women in science had ended, and everything was now fine. Cannon, thankfully, knew what was really up. She used her prize money to establish a new award for women in science, which was awarded to luminaries such as Payne-Gaposchkin and Maury, and is still helping female astronomers today. Dozens of other Harvard Computers were notable for work they did beyond Pickering’s research. Margaret Harwood was later appointed the director of the Maria Mitchell Observatory, becoming the first female director of an independent observatory. Johanna Mackie discovered the first nova (a bright

explosion caused by the re-ignition of a dormant star) in the constellation of Lyra, and was awarded the gold medal from the American Association of Variable Star Observers (AAVSO). Ida Woods was also honoured by AAVSO for discovering more than seven novae within the Milky Way galaxy. Henrietta Swan Leavitt discovered 2,400 variable stars throughout her career. These stars regularly brighten and then grow dim again, and Leavitt developed the period-luminosity law still in use today, which gives a relationship between the brightness of a variable star and the length of time taken to go through one cycle and return to its original level of light. Cecilia Payne-Gaposchkin was a variable star expert who became the first person to obtain a research PhD at the Harvard Observatory, and later became the first female tenured professor at Harvard. How many of their names do you know? If these women have been forgotten, then how many more thousands of women have helped discover fundamental aspects of our universe and then were swept under the rug, their names lost to future generations? How many landmark scientific projects involved women who were forgotten when it came to handing out Nobel prizes, writing books, and typing up Wikipedia pages? Craters on the Moon and Mars are named after Pickering, but his female assistants fell through the cracks into obscurity. Remember them. They mapped the stars—their names should still shine today.

Lauren is the kind of person who gets emotional about female scientists.