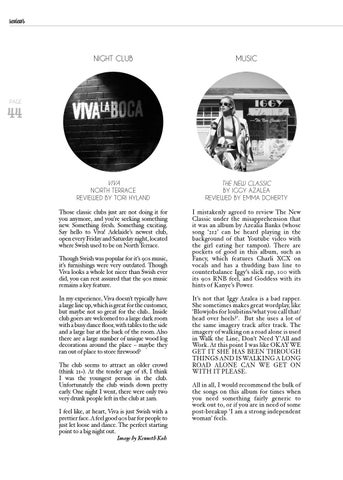 the new classic by iggy azalea Reviewed by emma doherty

north terrace Reviewed by tori hyland Those classic clubs just are not doing it for you anymore, and you’re seeking something new. Something fresh. Something exciting. Say hello to Viva! Adelaide’s newest club, open every Friday and Saturday night, located where Swish used to be on North Terrace. Though Swish was popular for it’s 90s music, it’s furnishings were very outdated. Though Viva looks a whole lot nicer than Swish ever did, you can rest assured that the 90s music remains a key feature. In my experience, Viva doesn’t typically have a large line up, which is great for the customer, but maybe not so great for the club.. Inside club goers are welcomed to a large dark room with a busy dance floor, with tables to the side and a large bar at the back of the room. Also there are a large number of unique wood log decorations around the place – maybe they ran out of place to store firewood? The club seems to attract an older crowd (think 21+). At the tender age of 18, I think I was the youngest person in the club. Unfortunately the club winds down pretty early. One night I went, there were only two very drunk people left in the club at 2am. I feel like, at heart, Viva is just Swish with a prettier face. A feel good 90s bar for people to just let loose and dance. The perfect starting point to a big night out. Image by Kenneth Koh.

I mistakenly agreed to review The New Classic under the misapprehension that it was an album by Azealia Banks (whose song ‘212’ can be heard playing in the background of that Youtube video with the girl eating her tampon). There are pockets of good in this album, such as Fancy, which features Charli XCX on vocals and has a thudding bass line to counterbalance Iggy’s slick rap, 100 with its 90s RNB feel, and Goddess with its hints of Kanye’s Power. It’s not that Iggy Azalea is a bad rapper. She sometimes makes great wordplay, like ‘Blowjobs for loubitins/what you call that/ head over heels?’. But she uses a lot of the same imagery track after track. The imagery of walking on a road alone is used in Walk the Line, Don’t Need Y’All and Work. At this point I was like OKAY WE GET IT SHE HAS BEEN THROUGH THINGS AND IS WALKING A LONG ROAD ALONE CAN WE GET ON WITH IT PLEASE. All in all, I would recommend the bulk of the songs on this album for times when you need something fairly generic to work out to, or if you are in need of some post-breakup ‘I am a strong independent woman’ feels.

INSIDE: What the 2014 Federal Budget means for students. 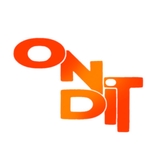