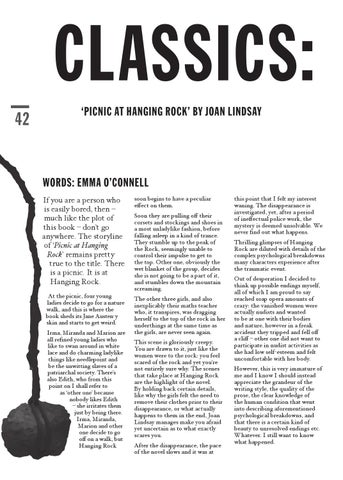 WORDS: EMMA O’CONNELL If you are a person who is easily bored, then – much like the plot of this book – don’t go anywhere. The storyline of ‘Picnic at Hanging Rock’ remains pretty true to the title. There is a picnic. It is at Hanging Rock. At the picnic, four young ladies decide to go for a nature walk, and this is where the book sheds its Jane Austen-y skin and starts to get weird. Irma, Miranda and Marion are all refined young ladies who like to swan around in white lace and do charming ladylike things like needlepoint and be the unwitting slaves of a patriarchal society. There’s also Edith, who from this point on I shall refer to as ‘other one’ because nobody likes Edith – she irritates them just by being there. Irma, Miranda, Marion and other one decide to go off on a walk, but Hanging Rock

soon begins to have a peculiar effect on them. Soon they are pulling off their corsets and stockings and shoes in a most unladylike fashion, before falling asleep in a kind of trance. They stumble up to the peak of the Rock, seemingly unable to control their impulse to get to the top. Other one, obviously the wet blanket of the group, decides she is not going to be a part of it, and stumbles down the mountain screaming. The other three girls, and also inexplicably their maths teacher who, it transpires, was dragging herself to the top of the rock in her underthings at the same time as the girls, are never seen again. This scene is gloriously creepy. You are drawn to it, just like the women were to the rock: you feel scared of the rock and yet you’re not entirely sure why. The scenes that take place at Hanging Rock are the highlight of the novel. By holding back certain details, like why the girls felt the need to remove their clothes prior to their disappearance, or what actually happens to them in the end, Joan Lindsay manages make you afraid yet uncertain as to what exactly scares you. After the disappearance, the pace of the novel slows and it was at

this point that I felt my interest waning. The disappearance is investigated, yet, after a period of ineffectual police work, the mystery is deemed unsolvable. We never find out what happens. Thrilling glimpses of Hanging Rock are diluted with details of the complex psychological breakdowns many characters experience after the traumatic event. Out of desperation I decided to think up possible endings myself, all of which I am proud to say reached soap opera amounts of crazy: the vanished women were actually nudists and wanted to be at one with their bodies and nature, however in a freak accident they tripped and fell off a cliff – other one did not want to participate in nudist activities as she had low self-esteem and felt uncomfortable with her body. However, this is very immature of me and I know I should instead appreciate the grandeur of the writing style, the quality of the prose, the clear knowledge of the human condition that went into describing aforementioned psychological breakdowns, and that there is a certain kind of beauty to unresolved endings etc. Whatever. I still want to know what happened.

Inside: debating about beards, kickstarter, and pregnancy on campus, plus we take a look at the asylum seeker debate.

Inside: debating about beards, kickstarter, and pregnancy on campus, plus we take a look at the asylum seeker debate.