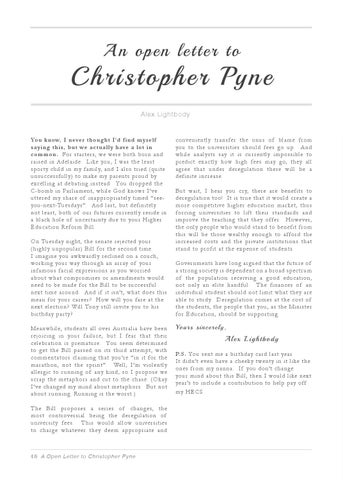 A n o pen letter to

You know, I never thought I’d find myself saying this, but we actually have a lot in common. For star ters, we were both bor n and raised in Adelaide. Like you, I was the least spor ty child in my family, and I also tried (quite unsuccessfully) to make my parents proud by excelling at debating instead. You dropped the C-bomb in Parliament, while God knows I’ve uttered my share of inappropriately timed “seeyou-next-Tuesdays”. And last, but definitely not least, both of our futures cur rently reside in a black hole of uncer tainty due to your Higher Education Refor m Bill. On Tuesday night, the senate rejected your (highly unpopular) Bill for the second time. I imagine you awkwardly reclined on a couch, working your way through an ar ray of your infamous facial expressions as you wor ried about what compromises or amendments would need to be made for the Bill to be successful next time around. And if it isn’t, what does this mean for your career? How will you fare at the next election? Will Tony still invite you to his bir thday par ty? Meanwhile, students all over Australia have been rejoicing in your failure, but I fear that their celebration is premature. You seem deter mined to get the Bill passed on its third attempt, with commentators claiming that you’re “in it for the marathon, not the sprint”. Well, I’m violently allergic to r unning of any kind, so I propose we scrap the metaphors and cut to the chase. (Okay I’ve changed my mind about metaphors. But not about r unning. Running is the worst.) The Bill proposes a series of changes, the most controversial being the deregulation of university fees. This would allow universities to charge whatever they deem appropriate and

46 A Open Letter to Christopher Pyne

conveniently transfer the onus of blame from you to the universities should fees g o up. And while analysts say it is cur rently impossible to predict exactly how high fees may g o, they all ag ree that under deregulation there will be a definite increase. But wait, I hear you cr y, there are benefits to deregulation too! It is tr ue that it would create a more competitive higher education market, thus forcing universities to lift their standards and improve the teaching that they offer. However, the only people who would stand to benefit from this will be those wealthy enough to afford the increased costs and the private institutions that stand to profit at the expense of students. Gover nments have long argued that the future of a strong society is dependent on a broad spectr um of the population receiving a g ood education, not only an elite handful. The finances of an individual student should not limit what they are able to study. Deregulation comes at the cost of the students, the people that you, as the Minister for Education, should be suppor ting.

P.S. You sent me a bir thday card last year. It didn’t even have a cheeky twenty in it like the ones from my nanna. If you don’t change your mind about this Bill, then I would like next year’s to include a contribution to help pay off my HECS.