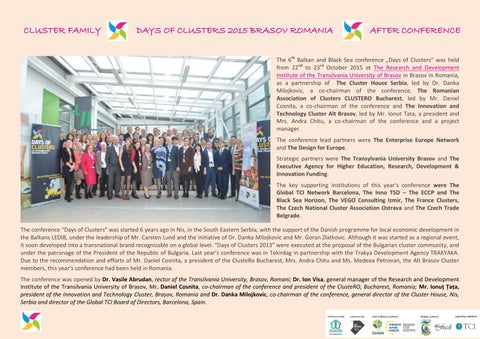 The 6th Balkan and Black Sea conference „Days of Clusters“ was held from 22nd to 23rd October 2015 at The Research and Development Institute of the Transilvania University of Brasov in Brasov in Romania, as a partnership of The Cluster House Serbia, led by Dr. Danka Milojkovic, a co-chairman of the conference, The Romanian Association of Clusters CLUSTERO Bucharest, led by Mr. Daniel Cosnita, a co-chairman of the conference and The Innovation and Technology Cluster Alt Brasov, led by Mr. Ionut Tata, a president and Mrs. Andra Chitu, a co-chairman of the conference and a project manager. The conference lead partners were The Enterprise Europe Network and The Design for Europe. Strategic partners were The Transylvania University Brasov and The Executive Agency for Higher Education, Research, Development & Innovation Funding. The key supporting institutions of this year’s conference were The Global TCI Network Barcelona, The Inno TSD – The ECCP and The Black Sea Horizon, The VEGO Consulting Izmir, The France Clusters, The Czech National Cluster Association Ostrava and The Czech Trade Belgrade. The conference “Days of Clusters” was started 6 years ago in Nis, in the South Eastern Serbia, with the support of the Danish programme for local economic development in the Balkans LEDIB, under the leadership of Mr. Carsten Lund and the initiative of Dr. Danka Milojkovic and Mr. Goran Zlatkovic. Although it was started as a regional event, it soon developed into a transnational brand recognizable on a global level. “Days of Clusters 2013” were executed at the proposal of the Bulgarian cluster community, and under the patronage of the President of the Republic of Bulgaria. Last year’s conference was in Tekirdag in partnership with the Trakya Development Agency TRAKYAKA. Due to the recommendation and efforts of Mr. Daniel Cosnita, a president of the ClusteRo Bucharest, Mrs. Andra Chitu and Ms. Medeea Petrovan, the Alt Brasov Cluster members, this year’s conference had been held in Romania. The conference was opened by Dr. Vasile Abrudan, rector of the Transilvania University, Brasov, Romani; Dr. Ion Visa, general manager of the Research and Development Institute of the Transilvania University of Brasov, Mr. Daniel Cosnita, co-chairman of the conference and president of the ClusteRO, Bucharest, Romania; Mr. Ionuț Țața, president of the Innovation and Technology Cluster, Brașov, Romania and Dr. Danka Milojkovic, co-chairman of the conference, general director of the Cluster House, Nis, Serbia and director of the Global TCI Board of Directors, Barcelona, Spain.

Exchange of knowledge and experiences in cluster development with special focused to the creative industries in developed countries and countries in transition,

Presentation of cluster success stories in the region,

The conference was a platform for signing of a multilateral and a few bilateral agreements. The multilateral memorandum of understanding was signed on 22nd October 2015 in Brasov, Romania within the accompanying the 6th Balkan and Black Sea Conference â&#x20AC;&#x17E;Days of Clusters 2015â&#x20AC;&#x153; between The Cluster House Nis Serbia, The Czech National Cluster Association Ostrava, the TECHNOUNITY Zelenograd Moscow Russia, The ClusteRo Bucharest Romania and The Hungarian National Association of Innovative Clusters IKOSZ with the aim of boosting the innovation and competitiveness in the region through clusters.

The bilateral agreements were signed between:    

Partnership between THE CLUSTERO, THE ALT BRASOV CLUSTER and THE CLUSTER HOUSE, commenced with the implementation of the conference "Days of Clusters", contributed to the further development of the cluster development in Transylvania region and cross border networking between Transylvania region and the Balkans’ countries. One of the key conference outputs is The SMART CLUSTER POLICY Declaration of the cluster-engaged participants of the 6th Days of Clusters Conference aimed to the governments of the Danube Region countries and their representatives in the EUSDR’s Priority Area 8 Steering Group to put the set of proposals on their agenda which will contribute to creation of the enable cluster environment in the region. Pavla

Traditionally, at the closing session, The Cluster House granted awards and acknowledgements for cluster development in the Balkan and Black Sea region, and this time to: The University of Transilvania, The ALT Brasov Cluster, The ClusteRo; Ms. Christina Leucuta, Senior Advisor of the CLUSTERO; Ms. Pavla Bruskova, President of the National Cluster Association Ostrava, Czech Republic; and Dr. Nikolina Trajanoska, Councillor, Head of Sector for Industry, Ministry of Economy of the Republic of Macedonia.

The University of Transilvania (Florin Nechita)

Besides professional programme, the conference hosts were enabled conference participants to enjoy Romanian music and food, and to experience the history and the magic of this wonderful place called Transylvania visiting the Bran Castle - Dracula Castle on Saturday 24th of October.

Speakers presentations and photos from the conference will be available at: http://daniklastera.clusterhouse.rs/ in November. Photos from the ALT Festival.

Happy Cluster Family wishing you all the best! Cheers! The VII Balkan and Black Sea conference „Days of Clusters 2016“ will be organized in October 20-22, 2016 in Skopje, Macedonia, developed in partnership with the Macedonian Cluster Community supported by the Ministry of Economy of the Republic of Macedonia and the National Centre for Development of Innovation and Entrepreneurial Learning Skopje, led by Dr. Radmil Polenakovikj, a president. Candidates for the future “Days of Clusters” are cluster organizations from Russia, Hungary and Serbia.

The Cluster House, as a founder and co-organizer of the conference, would like to thank the hosts of the conference T University of Transylvania, ALT Brasov Cluster and Romanian Clusters Association ClusteRo for the excellent 6 months cooperation and the possibility to continue even more intensive cross-border connection of South Eastern Serbia and Transylvania after the conference. A big thank you to all the members of the Organizing and programme Committee: Mr. Daniel Cosnita, Mrs. Christina Leucuta, Mr. Ionut Tata, Mr. Vedat Kunt, Mr. Dimitar Stoichev, Mrs. Andra Chitu and Ms. Medeea Petrovan for their patient cooperation with the Cluster House and dedicated work in order for us together to achieve the most successful conference up to now. For successful informing of the conference participants we would like to commend the work of the Balkan Cluster Network and the Info centre of the Cluster House. The Balkan Cluster Network includes more than 170 cluster organizations and support institutions from all of the Balkan countries. The Info centre of the Cluster House has more than 3000 contacts with experts in the field of economic development, institutions and entrepreneurs. The membership is free, and the mission of the network is cluster synergy in the Balkans in order to develop transnational projects, approach development funds and appear on new markets. The Cluster House, as the initiator and coordinator of the Balkan Cluster Network, developed a model for development of the SMEs and clusters in transitional countries that encourages synergetic effects of the cross-border cluster cooperation in the region.

SEE YOU NEXT YEAR IN MACEDONIA TIMELESS! Your Cluster House Team October 28, 2015