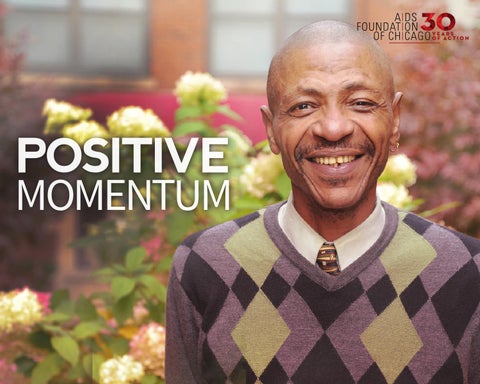 Our Mission The mission of the AIDS Foundation of Chicago is to lead the fight against HIV/AIDS and improve the lives of people affected by the epidemic. Founded in 1985 by community activists and physicians, the AIDS Foundation of Chicago is a local and national leader in the fight against HIV/AIDS. We collaborate with community organizations to develop and improve HIV/AIDS services; fund and coordinate prevention, care, and advocacy projects; and champion effective, compassionate HIV/AIDS policy.

Letter from the Board Chair and President/CEO Looking back on the brave and difficult history of the HIV epidemic — both in Illinois and around the world — it is remarkable that we have come so far. In the thirty years since the AIDS Foundation of Chicago (AFC) was established, the movement and our organization have changed dramatically. 2014 marked another year of dramatic change for the worldwide mission of ending new HIV infections and serving people whose daily lives are impacted by HIV and AIDS, and AFC was at the forefront of that change. With our allies and champions in Springfield and Washington, and with the support and expertise of our vibrant partner organizations, we are creating a world in which people’s lives aren’t dictated by a virus.

Yet we are still so far from the time when new HIV infections are rare. We know HIV continues to have a disproportionate impact on all gay men, and particularly young gay and bisexual men of color, transgender women, women of color and people experiencing poverty or homelessness. We know that awareness of HIV and preventive tools like pre-exposure prophylaxis (PrEP) is low among these and other communities. We know that HIV apathy is a growing force that needs to be stopped. And with that knowledge comes the power to write the final chapter of our thirty-year struggle with HIV. This report highlights the ways AFC has charted its course along the Road to Health, our three-year strategic plan, to help those who are most vulnerable to HIV gain access to testing, treatment, housing and prevention. Thank you for standing with us, propelling the momentum forward and doing your part to seize upon this profound time in the history of the HIV/AIDS movement.

HOUSING Multifaceted housing program serves the needs of key populations A house is more than a home â&#x20AC;&#x201D; it is a foundation upon which to build healthy, stable lives. AFC works with its vibrant network of partner agencies to provide safe and affordable housing for low-income people with HIV and other chronic illnesses so they have a better opportunity to flourish.

In 2014, AFCâ&#x20AC;&#x2122;s combined six supportive housing and housing stabilization programs offered 1,132 people in Illinois a home. Its two Substance Abuse and Mental Health Services Administration programs ended in 2014 after serving a total of 367 people in Illinois. Looking ahead to 2015, AFC will partner with Vida/ SIDA to provide needed housing to youth experiencing homelessness and living with HIV.

People served by one-time or emergency assistance to remain housed: 582.

A lot of people who are HIV-positive want to be in the program I am in — it promotes well-being, happiness and love. When Scott Christian was connected with the Samaritan Housing Program four years ago, he was presented with an opportunity: to stop sleeping on trains, to start getting his HIV under control, and to pursue life goals he never thought possible. Every day presents challenges, but thanks to this vital housing program, Christian has taken classes at a community college, walks with his dog and teaches tennis lessons to youth through the Chicago Park District. Taking the question of where Christian will sleep every night out of the equation — and connecting him to care that keeps his HIV undetectable — means Christian can thrive, rather than just survive.

It doesn’t matter who you are or where your district is — HIV affects everybody. And that’s why it’s so important to fund HIV services. Strong relationships between AFC and allies in the Illinois state legislature are the backbone for maintaining funding for the essential services AFC provides to thousands of people across the state. Two of those proponents, Representatives Thaddeus Jones (right) and Rita Mayfield (left), have a passion for the HIV/AIDS movement, and their records prove it. Working closely with AFC’s Policy team, led by Ramon Gardenhire (center), Jones and Mayfield led the fight to secure an additional $1 million in funding for HIV/AIDS services in the 2015 state budget. Their HIV work doesn’t stop in Springfield, though — Jones leads the Jones Foundation, which supports the HIV community in the southern suburbs of Chicago, and Mayfield works closely with Lake County Stands Against Stigma, which works to educate her district about HIV.

The work doesn’t stop at the state level, however — AFC leads nationwide and worldwide campaigns to promote new HIV prevention technologies, reduce HIV stigma and criminalization, expand access to female condoms, educate the HIV and housing communities about the Affordable Care Act and more. In 2014, advocacy efforts took members of the AFC staff to Cape Town, South Africa, to collaborate on prevention efforts and to UN offices in Geneva to report on inequities in the HIV epidemic. Locally, AFC staff conducted a statewide listening tour with partner organizations to solicit input on its policy priorities and amplified the demand for female condoms at its Global Female Condom Day rally.

Led 170 advocates from across Illinois in two lobbying and advocacy sessions in Springfield, resulting in conversations with over 100 state legislators. 2014 Annual Report | 7

Awareness and testing can end new HIV infections AFC leads a comprehensive campaign to test thousands of individuals each year for HIV, link HIV-positive individuals to care, provide state-of-the-art HIV prevention tools to those who need it most and advocate for statewide and international support for groundbreaking, new prevention methods.

AFC increased awareness of new preventive measures, such as pre-exposure prophylaxis (PrEP), a once-a-day pill that prevents HIV transmission by upwards of 90%, through workshops, a strong online and social media presence and key partnerships across Chicago.

Provided trainings on PrEP to 387 health care providers in Chicago and downstate Illinois.

AFC doesnâ&#x20AC;&#x2122;t just build innovative programs that screen key populations for HIV, such as the MSM Testing Initiative, which tested 2,997 people in 2014. AFC goes one step further by providing resources to help other organizations repeat successful strategies, like the Bridge Project Toolkit, which outlines a strategy for offering HIV tests in conjunction with state-run services.

Tested 5,022 people, 96 of whom were identified as HIV-positive, and linked 72 to care to date. 8 | AIDS Foundation of Chicago

STEP UP. GET TESTED.

AFC brings together some of the brightest minds and committed people to do the work we do collectively. Maurice Chapman has a wealth of experience in the HIV/AIDS sector in Chicago — but as a member of AFC’s Service Providers Council (SPC), a consortium of 34 key prevention, housing and case management organizations across the Chicago metropolitan area, his experience is magnified through the guidance he gets from his fellow council members. Chapman currently leads the South Suburban HIV/ AIDS Regional Clinics (SSHARC), and the experiences he has serving that community’s unique HIV needs are influenced by — and changing the direction of — his SPC members. For example, SSHARC’s focus on providing HIV services at non-traditional locations to reduce the impact of HIV stigma is a lesson that can be shared with other HIV organizations on the council.

The counselor was knowledgeable and patient. I am delighted with my new, lower health care premium! The opportunities provided to millions of Americans through the Affordable Care Act also come with a few challenges. For instance, how do you enroll in one of the many new insurance plans on the marketplace? AFC, in coordination with AIDS Legal Council of Chicago and Howard Brown Health Center, sends In-Person Counselors to key community spaces around Chicago to enroll people like Karen R. Mazique, who owns and manages Mazique Design Services. Thanks to the support she received from an In-Person Counselor, Mazique found a health insurance plan that fit her needs â&#x20AC;&#x201D; and her budget.

AND ENROLLMENT ASSISTANCE A spectrum of needs served, including health insurance enrollment AFC’s case management system connects clients to the services they need. This program, in partnerships with community organizations across Illinois, identifies medical and social service needs and facilitates referrals to meet those needs; assists clients in applying for benefits, including housing, transportation, food and nutrition services; and facilitates access to emergency homelessness prevention funds in times of crisis. One measure of success for AFC’s case management program is the viral suppression of its clients. In 2014, 81% of AFC’s case management clients in Cook and the collar counties were undetectable, meaning their HIV count was extremely low, allowing them to better manage their health. An undetectable viral load also decreases the risk of transmitting HIV by 96%.

PARTNERS Strengthening Illinoisâ&#x20AC;&#x2122; network of HIV/AIDS organizations Ending the HIV epidemic and serving the estimated 43,500 people living with HIV in Illinois cannot be accomplished by one organization alone. AFC supports the efforts of esteemed community-based organizations in Chicago and across Illinois to prevent new HIV infections and serve people living with the disease. In 2014, AFC distributed $16.3 million to over 50 organizations through more than 65 grants and contracts.

How can AFC support the Night Ministry, an organization known for its network of vehicles that bring health care, support and services to street corners across Chicago? By adding a new van to their fleet. Through AFC’s 29th round of Challenge Grants, this housing and health care organization was awarded a grant to cover part of the cost of a van for its new HIV Van program. A combined total of $220,000 was awarded through Challenge Grants to 18 organizations in December 2014.

Don’t play games with your HIV status The Salud y Orgullo Mexicano (“Mexican health and pride”) project works to connect Mexican men to services at Erie Family Health Center’s Lending Hands for Life program in Humboldt Park, which offers a range of services from HIV testing and medical care to emotional support. In collaboration with AFC, the organization produced a vibrant, lotería-style marketing campaign to encourage Mexican men living in Chicago to know their HIV and STI status.

Thank you to our 2014 partners Prevention

It’s hard to find a safe environment, an accepting environment, an understanding environment. And T2 was exactly that. Nancy Khurana has crossed a lot of metaphorical finish lines in her life — but with TEAM TO END AIDS (T2), she was trained to cross a very real finish line at the Chicago Half Marathon in September. T2 wasn’t just a training program for Khurana, though. It was also an opportunity to be a part of a community that embraces people living with HIV — a community that has been hard for her to find since being diagnosed as HIV-postive in December 2013. With support from her coaches, fellow athletes and a very special running partner, Khurana felt equipped to raise money for AFC, perform on race day better than she’d ever imagined and be among people who embrace those living with HIV.

The Sable Sherer Legacy Society offers AFC’s most passionate supporters the chance to make a donation through their estate plans. aidschicago.org/legacy

2014 FINANCIAL STATEMENT AFC is committed to transparency and informing the community, donors and funders about how we operate. To review AFCâ&#x20AC;&#x2122;s full audited financial statements from previous years, please visit aidschicago.org/financials.

What I considered bad turned out to be good and gave me direction.