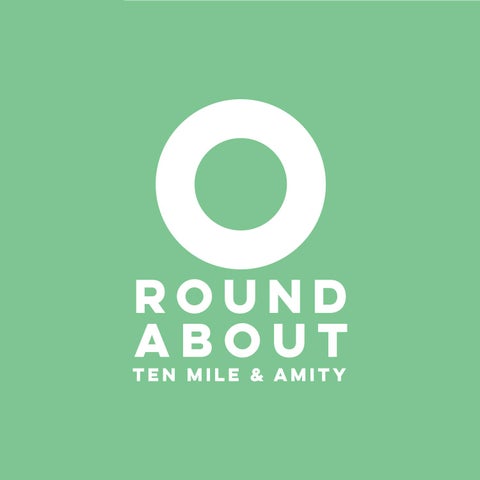 Description Build a roundabout at the intersection of Ten Mile and Amity • One lane in center • Two lanes approaching the roundabout • One for making the first right turn • One to enter the roundabout Roundabout will be designed so it can easily be expanded to two center lanes when needed in the future.

Design was put on hold when anticipated surrounding development did not occur. December 2017

2022 Construction year could be earlier, depending on future development.

Safety for motorists, pedestrians, and bicyclists

Traffic Volumes The numbers below represent the approximate number of vehicles entering the Ten Mile and Amity intersection during the peak hours.

When clear, cross to the splitter island

Wait in the splitter island until roadway is clear and cross to the opposite side.

BICYCLIST BENEFITS • Bicyclists and vehicles travel at similar speeds, which increases safety for bicyclists • Reduced high-speed conflict points • Simplified turning maneuvers • Bicyclists can either ride with traffic inside the roundabout or circulate as a pedestrian, using the sidewalk.

A â&amp;#x20AC;&amp;#x153;truck apronâ&amp;#x20AC;? on the edge of the center island allows large vehicles and trucks with trailers to maneuver through a roundabout by allowing the wheels of the truck or trailer to roll onto the apron. December 2017

Semi-trucks, emergency vehicles and school busses will be able to drive through the roundabout

What is Next? Thank you for reviewing the project information!

ACHD will address the comments received from the public and finalize the design.

Construction is anticipated for 2022, but could start earlier depending on the pace of future development.

Take the survey! While your comments are always welcome, they can be best used if received by January 11, 2018.

Learn More Click on the following links to learn more about roundabouts. Learn how to use a roundabout as a motorist, pedestrian and/or bicyclist.