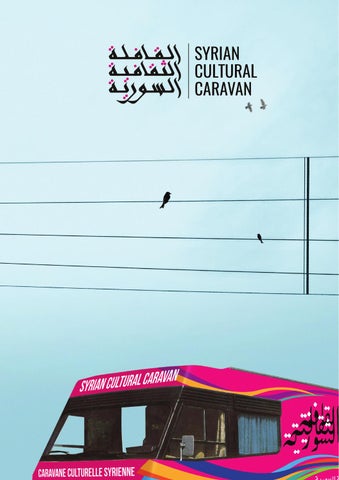 SPACE Established in May 2015, the Syrian Peace Action Center (SPACE) is a common space for Syria with the aim of combating the violent fragmentation the people of Syria are undergoing. SPACE emphasizes the role of the people in political questions. We believe that the question of Syria can only be answered democratically, and that any narrative that excludes the people is ultimately an endorsement of undemodecades Syrians have reclaimed the public space and started constructing their narratives, gains we believe are irrevocable and are building blocks for a democratic Syrian society.

Syrian Cultural Caravan on July 2014 for a tour that passed through France, Italy, Germany and came to an end in Brussels in September 2014. Artists of all disciplines (visual producing at each stage exhibitions, musical performances, street theatre

The warm welcome they received and the positive exchanges the caravan brought led the participants, those who supported them and those who contributed to its success to create a cultural and artistic movement entitled the "Syrian Cultural CaravSyrian Cultural Caravan an". Its goal is to promote Syrian culture and contemporary art and to create a platform for exchange with all cultural and artistic actors in Europe and the World.

Migration across the sea Dino Ahmad Ali is a Syrian visual artist living in Paris. He has a B.A. in 2007 from the Faculty of Fine Arts of Damascus University. In 2014 he obtained his M.A. from the University of Paris 8. Dino is an enthusiastic young artist who loves to explore new ideas. His focus is on visual art, op art, photography, and video art.

Hand Akram A l Halabi (1981) was born in M ajdal-Shams, I sraeli-occupied Golan Heights. He studied drawing and painting at Bait Al Fan (the Art House). In 2005, he received a B.A. in Fine Arts from the Faculty of Fine Arts i n Damascus. T hrough t he One W orld S cholarship o f the Afro-Asian-Institute, he attended the Academy of Fine Arts in Vienna. Al Halabi is a founding member and volunteer at F. Mudarris Center of Arts and Culture in Majdal-Shams.

RAS RAS Born in 1977 in Algeria to Syrian parents. He studied at the Faculty of Fine Arts in Beirut and at Universität der Künste in Berlin. Kaaf won several awards, such as The Young Collector’s at the MAXXI museum in Rome, the DAAD-Preis UdK in Berlin, and the AIR Honor Award from are erosion and resistance, which he explores using glass, paper, video and photography. His works are presented t hroughout Europe and the United S tates, i ncluding M artin Gropius Bau Berlin, Yellowstone Art Museum and the Bad König-Zell.

er and artist. The s ubjects of h is w ork range from recovered studio ers and artists. Early in his career, Al-Beik focused on Syria, documenting the ways communities navigated societal instability under punishing isolation and political control. With the start of the Syrian uprising, resistance.

Bab A ssalam (the gate of peace) i s the meeting of t wo Syrian musicians, Khaled A ljaramani ( oud and v ocals) and h is b rother M ohanad Aljaramani ( percussion and v ocals) w ith French clarinetist RaphaĂŤl Vuillard. They have been playing since 2005, with initial support from the French Cultural Centre in Aleppo. Since then, they have played in the Middle East, Africa and Europe. They have had outstanding concerts in the Opera House in Damascus, Aleppo Citadel, Kuwait International Festival, Summertime i n Nantes, among o thers. Bab A ssalam was born in Syria, but today, the two Syrian brothers live in exile, in Lyon, but t heir voyage t owards t he gate of peace, t owards A leppo, will continue.

Mahmoud Darwich Born in Nice, 1942, Ernest Pignon-Ernest is a self-taught visual artist. He is one of the initiators of urban art in France. His work is often politically motivated. He produces serigraphs, drawings in black chalk, paintings that stick to walls, doors, stairs, and which are based in architecture. In t he 1 970s, he began w ith the political s eries: L a Commune (1970), Blocked M en (1972), The I mmigrant (1975) Eviction (1979). With Antonio Saura and Jacques Derrida, he founded â&#x20AC;&#x153;Artists of the world against apartheidâ&#x20AC;? in 1974.

Them â&#x20AC;&#x201C; me Iman Hasbani is a visual artist from Syria. She earned her degree in oil painting from the School of Fine Arts, University of Damascus in 2004. She is the recipient of numerous awards, both inside and outside Syria, She has participated in exhibitions in Syria, Jordan, Denmark, France, Canada, Italy, Egypt, Qatar, Dubai, Lebanon and Germany.

Strike of dignity, 2012 Jaber al Azmeh was born in Damascus 1973. He has a B.A. in Fine Arts from Damascus University, and dedicated his career t o professional photography. I n 2006 h e became a resident l ecturer a t the International U niversity o f Science & Technology i n Damascus. H e held h is followed by Green Art Gallery-Dubai where he went on exhibiting his future solo shows. He has been titled artist of the month by Le Monde diplomatique.

Les lumiĂ¨res des faubourgs Born in 1 945 in Aleppo, M ohamad Al Roumi obtained h is diploma in Fine Arts in Damascus in 1972. He launched his artistic career as a painter, later turning to photography. His photographs a re w idely published and used in books, articles, themed exhibitions in various culturBlue-Grey, w as r eleased i n 2002 i n dozens o f festivals around t he world.

Untitled diploma in photography from the International Professional Center in Homs. Salman won the Crossing G lances Photography c ontest i n Rome in 2006. He has participated in exhibitions in Syria and around the world. At one exhibition, Salman presented nearly 600 documentary photos showing the most violent and painful moments of Syriaâ&#x20AC;&#x2122;s modern history. His photos tell the story of the beginning of the Syrian revolution in 2 011, a nd capture t he e ssence o f the Syrian reality, i n which pain mixes w ith hope, and l oss mixes w ith dreams and a l ost childhood.

Sewing machine Born in Damascus, Sulafa Hijazi is a visual artist, director and producer. She studied at the Higher Institute of the Dramatic Arts in Syria and at the St채delschule Art Academy in Frankfurt Am Main, Germany. In addition to her artwork, Hijazi began her professional career since 1997 as production, w ith a particular focus o n children education and s ocial development. In addition, she was a member of the founding team of member of CIFEJ International Center of Films for Children and Young People since 2012.

Bon Voyage Born in 1980, Tammam Azzam graduated from the Faculty of Fine Arts in Damascus. He has participated in many solo and group exhibitions including: Rush Arts, N ew Y ork (2014); FotoFest Biennial, Houston (2014); Ayyam Gallery in London (2013); 30th Biennial of Graphic Arts in has circulated on social media, and has made headlines in international press. His most renowned work makes use of The Kiss by Gustav Klimt by the war.

Eye and I Born in 1978 in Syria, Walaa Dekak earned a Master of Fine Arts from the University of Damascus. He moved to Paris in 2004 to continue his studies and and pursue a PhD a t the University o f Paris i n Arts and Sciences f ocusing on aesthetic arts. Dekak continues t o paint and make design installations

Untitled of Fine Arts in Damascus in 1997. He then continued studying graphic design at the same university. He taught graphic design at the University of Damascus and the Art Institute of Sharjah, United Arab Emirates. He participated in numerous exhibitions in the Arab world and Europe a nd h is w ork was appreciated with s everal a wards, like the Biannual Lattakia prize and the Prix d â&#x20AC;&#x2122;Honneur from the Cervantes Institute in Damascus in 2000. 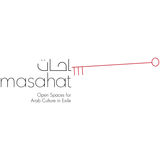