HRC 23: Statement by Center for Reproductive RIghts and Sexual Rights Initiative on SR report on VAW 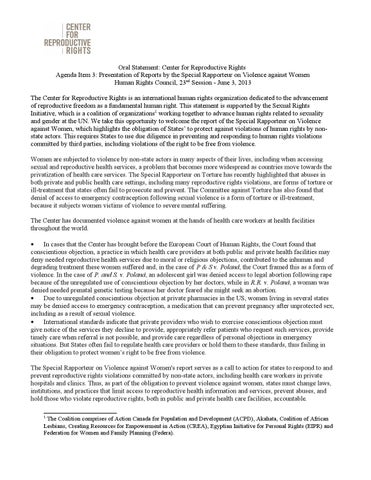 Oral Statement: Center for Reproductive Rights Agenda Item 3: Presentation of Reports by the Special Rapporteur on Violence against Women Human Rights Council, 23nd Session - June 3, 2013 The Center for Reproductive Rights is an international human rights organization dedicated to the advancement of reproductive freedom as a fundamental human right. This statement is supported by the Sexual Rights Initiative, which is a coalition of organizations1 working together to advance human rights related to sexuality and gender at the UN. We take this opportunity to welcome the report of the Special Rapporteur on Violence against Women, which highlights the obligation of States’ to protect against violations of human rights by nonstate actors. This requires States to use due diligence in preventing and responding to human rights violations committed by third parties, including violations of the right to be free from violence. Women are subjected to violence by non-state actors in many aspects of their lives, including when accessing sexual and reproductive health services, a problem that becomes more widespread as countries move towards the privatization of health care services. The Special Rapporteur on Torture has recently highlighted that abuses in both private and public health care settings, including many reproductive rights violations, are forms of torture or ill-treatment that states often fail to prosecute and prevent. The Committee against Torture has also found that denial of access to emergency contraception following sexual violence is a form of torture or ill-treatment, because it subjects women victims of violence to severe mental suffering. The Center has documented violence against women at the hands of health care workers at health facilities throughout the world. • In cases that the Center has brought before the European Court of Human Rights, the Court found that conscientious objection, a practice in which health care providers at both public and private health facilities may deny needed reproductive health services due to moral or religious objections, contributed to the inhuman and degrading treatment these women suffered and, in the case of P &amp; S v. Poland, the Court framed this as a form of violence. In the case of P. and S. v. Poland, an adolescent girl was denied access to legal abortion following rape because of the unregulated use of conscientious objection by her doctors, while in R.R. v. Poland, a woman was denied needed prenatal genetic testing because her doctor feared she might seek an abortion. • Due to unregulated conscientious objection at private pharmacies in the US, women living in several states may be denied access to emergency contraception, a medication that can prevent pregnancy after unprotected sex, including as a result of sexual violence. • International standards indicate that private providers who wish to exercise conscientious objection must give notice of the services they decline to provide, appropriately refer patients who request such services, provide timely care when referral is not possible, and provide care regardless of personal objections in emergency situations. But States often fail to regulate health care providers or hold them to these standards, thus failing in their obligation to protect women’s right to be free from violence. The Special Rapporteur on Violence against Women&#39;s report serves as a call to action for states to respond to and prevent reproductive rights violations committed by non-state actors, including health care workers in private hospitals and clinics. Thus, as part of the obligation to prevent violence against women, states must change laws, institutions, and practices that limit access to reproductive health information and services, prevent abuses, and hold those who violate reproductive rights, both in public and private health care facilities, accountable. 1

HRC 23: Statement by Center for Reproductive RIghts and Sexual Rights Initiative on SR report on VAW

Agenda Item 3: Presentation of Reports by the Special Rapporteur on Violence against Women