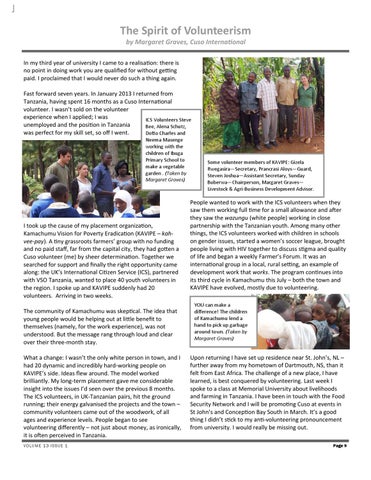 The Spirit of Volunteerism   by Margaret Graves, Cuso Interna onal     In my third year of university I came to a realisa on: there is    no point in doing work you are qualified for without ge ng    paid. I proclaimed that I would never do such a thing again.        Fast forward seven years. In January 2013 I returned from    Tanzania, having spent 16 months as a Cuso Interna onal  volunteer. I wasn’t sold on the volunteer  experience when I applied; I was  ICS Volunteers Steve  unemployed and the posi on in Tanzania  Bee, Alena Schutz,  was perfect for my skill set, so oﬀ I went.    Do o Charles and  Neema Masenge  working with the  children of Ibuga  Primary School to  make a vegetable  garden . (Taken by  Margaret Graves)

I took up the cause of my placement organiza on,  Kamachumu Vision for Poverty Eradica on (KAVIPE – kah‐ vee‐pay). A  ny grassroots farmers’ group with no funding  and no paid staﬀ, far from the capital city, they had go en a  Cuso volunteer (me) by sheer determina on. Together we  searched for support and finally the right opportunity came  along: the UK’s Interna onal Ci zen Service (ICS), partnered  with VSO Tanzania, wanted to place 40 youth volunteers in  the region. I spoke up and KAVIPE suddenly had 20  volunteers.  Arriving in two weeks.      The community of Kamachumu was skep cal. The idea that  young people would be helping out at li le benefit to  themselves (namely, for the work experience), was not  understood. But the message rang through loud and clear  over their three‐month stay.     What a change: I wasn’t the only white person in town, and I  had 20 dynamic and incredibly hard‐working people on  KAVIPE’s side. Ideas flew around. The model worked  brilliantly. My long‐term placement gave me considerable  insight into the issues I’d seen over the previous 8 months.  The ICS volunteers, in UK‐Tanzanian pairs, hit the ground  running; their energy galvanised the projects and the town –  community volunteers came out of the woodwork, of all  ages and experience levels. People began to see  volunteering diﬀerently – not just about money, as ironically,  it is o en perceived in Tanzania.   VOLUME 13 ISSUE 1

Some volunteer members of KAVIPE: Gizela    Rwegasira—Secretary, Prancrasi Aloys—Guard,    Steven Joshua—Assistant Secretary, Sunday    Buberwa—Chairperson, Margaret Graves—   Livestock & Agri‐Business Development Advisor.     People wanted to work with the ICS volunteers when they  saw them working full  me for a small allowance and a er  they saw the wazungu (white people) working in close  partnership with the Tanzanian youth. Among many other  things, the ICS volunteers worked with children in schools  on gender issues, started a women’s soccer league, brought  people living with HIV together to discuss s gma and quality  of life and began a weekly Farmer’s Forum. It was an  interna onal group in a local, rural se ng, an example of  development work that works. The program con nues into  its third cycle in Kamachumu this July – both the town and  KAVIPE have evolved, mostly due to volunteering.    YOU can make a  diﬀerence! The children  of Kamachumu lend a  hand to pick up garbage  around town. (Taken by  Margaret Graves)

Upon returning I have set up residence near St. John’s, NL –  further away from my hometown of Dartmouth, NS, than it  felt from East Africa. The challenge of a new place, I have  learned, is best conquered by volunteering. Last week I  spoke to a class at Memorial University about livelihoods  and farming in Tanzania. I have been in touch with the Food  Security Network and I will be promo ng Cuso at events in  St John’s and Concep on Bay South in March. It’s a good  thing I didn’t s ck to my an ‐volunteering pronouncement  from university. I would really be missing out.   Page 9