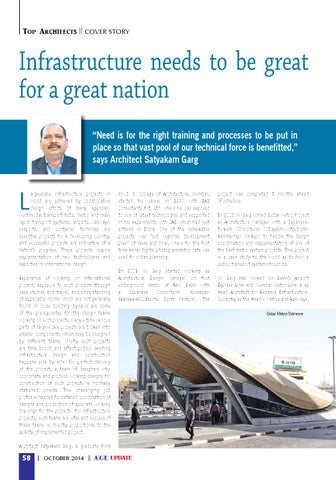 Infrastructure needs to be great for a great nation “Need is for the right training and processes to be put in place so that vast pool of our technical force is benefitted,” says Architect Satyakam Garg

arge-scale infrastructure projects in world are achieved by collaborative design efforts of many agencies. Multimodal transport hubs, metro and mass rapid transport systems, airports, railways, seaports, and container terminals are essential projects for a developing country, and successful projects are indicative of a nation’s progress. These projects require implementation of new technologies and expertise in international design. Experience of working on international project, exposure to such projects through case studies and travel, and understanding of applicable norms which are not generally found in local building by-laws are some of the prerequisites for the design teams working on such projects. Many a time various parts of large-scale projects are broken into smaller components which may be designed by different teams. Mostly such projects are time bound and affect public; existing infrastructure design and construction happens side by side. For perfect delivery of the project, a team of designers who coordinate and produce working designs for construction of such projects is normally stationed on-site. This challenging job profile is needed for detailed coordination of designs and production of accurate working drawings for the projects. For infrastructure projects, such teams are vital and success of these teams is directly proportional to the quality of implemented project.

Sir J. J. College of Architecture, Mumbai, started his career in 1990 with IAG Consultants Pvt. Ltd. where he was exposed to use of latest technologies and supported in his experiments with CAD which had just entered in India. One of the remarkable projects was “sub regional development plan” of Vasai and Virar, where for the first time aerial digital photogrammetric data was used for urban planning. In 2001 Mr Garg started working as Architectural Design Manager on first underground metro of New Delhi with a Japanese Consortium (KumagaiSkanska-HCC-Itochu Joint Venture). The

Architect Satyakam Garg, a graduate from

project was completed 7 months ahead of schedule. In 2006 Mr Garg joined Dubai Metro Project as Architecture Manager with a JapaneseTurkish Consortium (Obayashi-MitsubishiKajima-Yapi Merkeji) to handle the design coordination and implementation of one of the best metro system projects. This project is a case study to the world as to how a public transport system should be. Mr Garg has worked on Delhi’s Airport Express Line and Mumbai Metro Line 1 as Head Architect for Reliance Infrastructure. Currently as the Head – Metros and Railways, Dubai Metro Entrance