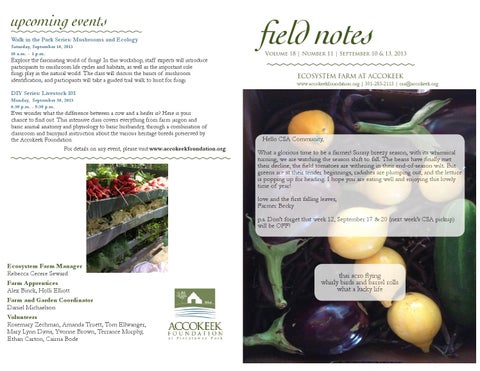 Explore the fascinating world of fungi! In this workshop, staff experts will introduce participants to mushroom life cycles and habitats, as well as the important role fungi play in the natural world. The class will discuss the basics of mushroom identification, and participants will take a guided trail walk to hunt for fungi.

Ever wonder what the difference between a cow and a heifer is? Here is your chance to find out. This intensive class covers everything from farm jargon and basic animal anatomy and physiology to basic husbandry, through a combination of classroom and barnyard instruction about the various heritage breeds preserved by the Accokeek Foundation. For details on any event, please visit www.accokeekfoundation.org.

Hello CSA Community, What a glorious time to be a farmer! Sunny breezy season, with its whimsical turning, we are watching the season shift to fall. The beans have finally met their decline, the field tomatoes are withering in their end-of-season wilt. But greens are at their tender beginnings, radishes are plumping out, and the lettuce is popping up for heading. I hope you are eating well and enjoying this lovely time of year! love and the first falling leaves, Farmer Becky p.s. Donâ&amp;#x20AC;&amp;#x2122;t forget that week 12, September 17 &amp; 20 (next weekâ&amp;#x20AC;&amp;#x2122;s CSA pickup) will be OFF!

The Pawpaw By: Holli Elliott I recently had my first taste of this native fruit and now I want to shout from the rooftops, “WE HAVE TROPICAL FRUIT GROWING IN MARYLAND!” Seriously, somewhere between a banana and mango, and in the same plant family as the cherimoya, soursop and custard-apple, this amazing creation could be hanging out in your back yard. The pawpaw, Asimina triloba, commonly grows in floodplains and shady, rich bottomlands. It often forms as a patch or thicket of individual small slender trees. Growing up to 35 feet tall and 5-12 inches in diameter, the pawpaw has a distinct leaf pattern that make it east to identify. It propagates easily from seed, requires little maintenance once established and, because of its fast-growth and tolerance of frequent flooding, is valuable in habitat restoration and erosion prevention. The leaves of the pawpaw have a disagreeable smell, like green peppers, and contain natural insecticides known as acetoginins. Larvae of the zebra swallowtail feed exclusively on young leaves of the pawpaw and chemicals in pawpaw leaves confer protection throughout the butterfly’s life, making it impalpable to other predators. The bark of the pawpaw has been shown to have anti-tumor properties and is used in many chemotherapy treatments.

Fruit production in the pawpaw is sometimes limited because few pollinators are attracted to the flower’s faint or, sometimes, non-existent scent. The flowers produce an odor similar to that of rotting meat and attract blowflies and carrion beetles for cross-pollination. YUCK! It is believed pawpaw plants are self-incompatible, requiring cross-pollination between trees of different patches in order to produce fruit. In commercial production (which is very limited) growers often resort to hanging meat in trees to attract pollinators. With disagreeable smells and toxic chemicals, you’d think the fruit wouldn’t be so good. However, pawpaws have been a favorite for centuries. Native Americans relished them. Chilled pawpaw was said to be George Washington’s favorite dessert, and he even sent them around the world as gifts. Leaves of the pawpaw tree turn golden yellow at the same time their fruit ripens. his makes them easy to spot from a distance. Pawpaw season lasts only about a month. So put on your hiking shoes and go get yourself some of this “prairie banana” while you can! I’m headed out now to find some more of this native, tropical treasure so I can turn it into ice cream. Pawpaw fruit pulp can be substituted with volumetric equivalency in banana-based recipes.