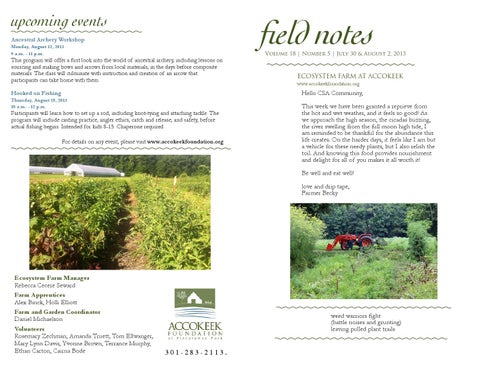 This program will offer a first look into the world of ancestral archery, including lessons on sourcing and making bows and arrows from local materials, in the days before composite materials. The class will culminate with instruction and creation of an arrow that participants can take home with them.

Participants will learn how to set up a rod, including knot-tying and attaching tackle. The program will include casting practice, angler ethics, catch and release, and safety, before actual fishing begins. Intended for kids 8-15. Chaperone required. For details on any event, please visit www.accokeekfoundation.org.

This week we have been granted a reprieve from the hot and wet weather, and it feels so good! As we approach the high season, the cicadas buzzing, the river swelling from the full moon high tide, I am reminded to be thankful for the abundance this life creates. On the harder days, it feels like I am but a vehicle for these needy plants, but I also relish the toil. And knowing this food provides nourishment and delight for all of you makes it all worth it! Be well and eat well! love and drip tape, Farmer Becky

To Weed or Not to Weed By Daniel Michaelson According to the Encyclopedia Britannica, a weed is any plant growing where it is not wanted. This means that a weed to one person may be a prized gem to another. Regardless of what you or I view as a weed, the bottom line is that, as humans, we spend a large portion of our agricultural energy eradicating or otherwise â&amp;#x20AC;&amp;#x153;controllingâ&amp;#x20AC;? weeds. I wonder about the relative value of this activity. Is there an alternative to our obsession with the annual crops that require so much weeding? As Mark Shepard of New Forest Farm puts it, modern agriculture concerns itself with killing plants that want to live (weeds) to allow plants that need massive inputs to thrive. He employs sheer, total, utter neglect (STUN) on his farm near Viola, Wisconsin. This technique is especially suited to the perennial agriculture he practices and essentially eliminates the need for hand weeding or pesticide use. Instead, he uses pigs, sheep, and cattle to control the understory beneath his chestnut, pecan, apple, and hazelnut plants. To succeed in annual agriculture, weeds have to be controlled. Organic growers use mulch, tractor cultivation, hand cultivation-weeding, black plastic, cover cropping, tillage, and artificial selection to control weeds. In conventional agriculture, the bag of tricks is larger. In addition to the above mentioned techniques, conventional growers may employ a wide range of chemical controls and genetic engineering to stack the deck against unwanted plants. An example of this is the well-known glyphosatebased corn and bean agriculture being practiced all over the country. Farmers plant their crop of genetically engineered corn or soybeans and spray glyphosate, sold under the trade name Roundup, at a critical point of growth to eliminate encroaching competitors. With genetically based resistance to the herbicide, the corn and beans endure the treatment while the weeds brown and die. Some herbicides, such as 2,4-D the first invented, only kill dicots (broadleaf plants) such as legumes making them particularly useful in the production of cereal grass crops such as wheat, maize, and rice.

In both organic and conventional systems weed control is dependent on inputs, which cost money. Why not take our problem and turn it into food? To start, many of the most common weeds and some of those that affect us at the Ecosystem Farm make great human and animal food. For example, pig weed and lambâ&amp;#x20AC;&amp;#x2122;s quarters are both highly nutritious and prolific human and animal food. Those weeds that we cannot eat directly such as foxtail, dock, etc. can be used to feed animals in the understory of fruit and nut trees. The calorie and protein rich annual staples the world depends on such as wheat and soybeans can at least be partially replaced by perennials such as acorn, chestnut, hazelnut and more. Annual crops, especially the vitamin-rich fruits and vegetables we produce on the Ecosystem Farm, should still be included in our diet. So, we will choose to use cover cropping and mulch to suppress the weeds when we have to and select and grow only the most competitive annual crops in planting densities that maximize weed suppression. In general, I believe we can all strive to minimize the time spent bent over in the sun killing plants that want to live and supporting plants that want to die. Happy weeding!