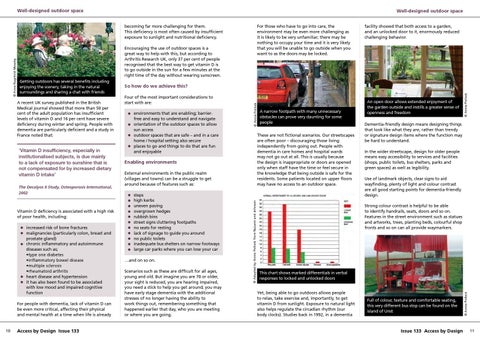 Encouraging the use of outdoor spaces is a great way to help with this, but according to Arthritis Research UK, only 37 per cent of people recognised that the best way to get vitamin D is to go outside in the sun for a few minutes at the right time of the day without wearing sunscreen.

External environments in the public realm (villages and towns) can be a struggle to get around because of features such as: ●● ●● ●● ●● ●●

i ncreased risk of bone fractures malignancies (particularly colon, breast and prostate gland) chronic inflammatory and autoimmune diseases such as; • type one diabetes • inflammatory bowel disease • multiple sclerosis • rheumatoid arthritis heart disease and hypertension it has also been found to be associated with low mood and impaired cognitive function

For people with dementia, lack of vitamin D can be even more critical, affecting their physical and mental health at a time when life is already

…and on so on. Scenarios such as these are difficult for all ages, young and old. But imagine you are 70 or older, your sight is reduced, you are hearing impaired, you need a stick to help you get around; you may have early stage dementia with the additional stresses of no longer having the ability to work things out, remembering something that happened earlier that day, who you are meeting or where you are going.

A narrow footpath with many unnecessary obstacles can prove very daunting for some people These are not fictional scenarios. Our streetscapes are often poor – discouraging those living independently from going out. People with dementia in care homes and hospital wards may not go out at all. This is usually because the design is inappropriate or doors are opened only when staff have the time or feel secure in the knowledge that being outside is safe for the residents. Some patients located on upper floors may have no access to an outdoor space.

Vitamin D deficiency is associated with a high risk of poor health, including:

nvironments that are enabling; barriere free and easy to understand and navigate orientation of the outdoor spaces to allow sun access outdoor spaces that are safe – and in a care home / hospital setting also secure places to go and things to do that are fun and enjoyable

Four of the most important considerations to start with are:

Dementia-friendly design means designing things that look like what they are, rather than trendy or signature design items where the function may be hard to understand. In the wider streetscape, design for older people means easy accessibility to services and facilities (shops, public toilets, bus shelters, parks and green spaces) as well as legibility. Use of landmark objects, clear signs to aid wayfinding, plenty of light and colour contrast are all good starting points for dementia-friendly design. Strong colour contrast is helpful to be able to identify handrails, seats, doors and so on. Features in the street environment such as statues and artworks, trees, planting beds, colourful shop fronts and so on can all provide waymarkers.

This chart shows marked differentials in verbal responses to locked and unlocked doors Yet, being able to go outdoors allows people to relax, take exercise and, importantly, to get vitamin D from sunlight. Exposure to natural light also helps regulate the circadian rhythm (our body clocks). Studies back in 1992, in a dementia

Full of colour, texture and comfortable seating, this very different bus stop can be found on the island of Unst

‘Vitamin D insufficiency, especially in institutionalised subjects, is due mainly to a lack of exposure to sunshine that is not compensated for by increased dietary vitamin D intake’

facility showed that both access to a garden, and an unlocked door to it, enormously reduced challenging behavior.

So how do we achieve this?

Getting outdoors has several benefits including enjoying the scenery, taking in the natural surroundings and sharing a chat with friends A recent UK survey published in the British Medical journal showed that more than 50 per cent of the adult population has insufficient levels of vitamin D and 16 per cent have severe deficiency during winter and spring. People with dementia are particularly deficient and a study in France noted that:

For those who have to go into care, the environment may be even more challenging as it is likely to be very unfamiliar; there may be nothing to occupy your time and it is very likely that you will be unable to go outside when you want to as the doors may be locked.

© Adapted by Annie Pollock from Nazami and Johnson

becoming far more challenging for them. This deficiency is most often caused by insufficient exposure to sunlight and nutritional deficiency.

The Centre for Accessible Environments' leading UK journal on inclusive design and access for all including disabled and older people.