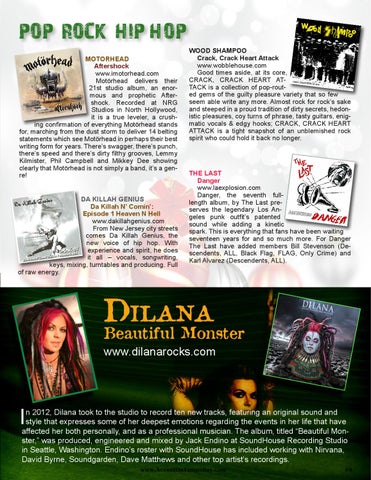 Wood Shampoo Crack, Crack Heart Attack www.wobblehouse.com Good times aside, at its core, CRACK, CRACK HEART ATTACK is a collection of pop-routed gems of the guilty pleasure variety that so few seem able write any more. Almost rock for rock’s sake and steeped in a proud tradition of dirty secrets, hedonistic pleasures, coy turns of phrase, tasty guitars, enigmatic vocals & edgy hooks; CRACK, CRACK HEART ATTACK is a tight snapshot of an unblemished rock spirit who could hold it back no longer.

The Last Danger www.laexplosion.com Danger, the seventh fulllength album, by The Last preserves the legendary Los Angeles punk outfit’s patented sound while adding a kinetic spark. This is everything that fans have been waiting seventeen years for and so much more. For Danger The Last have added members Bill Stevenson (Descendents, ALL, Black Flag, FLAG, Only Crime) and Karl Alvarez (Descendents, ALL).

n 2012, Dilana took to the studio to record ten new tracks, featuring an original sound and style that expresses some of her deepest emotions regarding the events in her life that have affected her both personally, and as a professional musician. The album, titled “Beautiful Monster,” was produced, engineered and mixed by Jack Endino at SoundHouse Recording Studio in Seattle, Washington. Endino’s roster with SoundHouse has included working with Nirvana, David Byrne, Soundgarden, Dave Matthews and other top artist’s recordings. www.AccentOnTampaBay.com 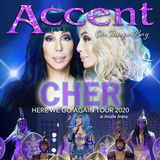