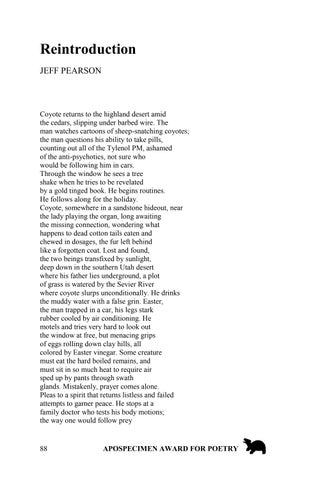 Coyote returns to the highland desert amid the cedars, slipping under barbed wire. The man watches cartoons of sheep-snatching coyotes; the man questions his ability to take pills, counting out all of the Tylenol PM, ashamed of the anti-psychotics, not sure who would be following him in cars. Through the window he sees a tree shake when he tries to be revelated by a gold tinged book. He begins routines. He follows along for the holiday. Coyote, somewhere in a sandstone hideout, near the lady playing the organ, long awaiting the missing connection, wondering what happens to dead cotton tails eaten and chewed in dosages, the fur left behind like a forgotten coat. Lost and found, the two beings transfixed by sunlight, deep down in the southern Utah desert where his father lies underground, a plot of grass is watered by the Sevier River where coyote slurps unconditionally. He drinks the muddy water with a false grin. Easter, the man trapped in a car, his legs stark rubber cooled by air conditioning. He motels and tries very hard to look out the window at free, but menacing grips of eggs rolling down clay hills, all colored by Easter vinegar. Some creature must eat the hard boiled remains, and must sit in so much heat to require air sped up by pants through swath glands. Mistakenly, prayer comes alone. Pleas to a spirit that returns listless and failed attempts to garner peace. He stops at a family doctor who tests his body motions; the way one would follow prey