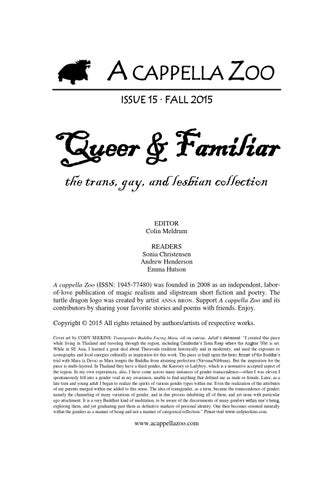 Queer &amp; Familiar the trans, gay, and lesbian collection EDITOR Colin Meldrum READERS Sonia Christensen Andrew Henderson Emma Hutson A cappella Zoo (ISSN: 1945-77480) was founded in 2008 as an independent, laborof-love publication of magic realism and slipstream short fiction and poetry. The turtle dragon logo was created by artist ANNA BRON. Support A cappella Zoo and its contributors by sharing your favorite stories and poems with friends. Enjoy. Copyright © 2015 All rights retained by authors/artists of respective works. Cover art by CODY SEEKINS: Transgender Buddha Facing Mara, oil on canvas. Artist’s statement: “I created this piece while living in Thailand and traveling through the region, including Cambodia’s Siem Reap where the Angkor Wat is set. While in SE Asia, I learned a great deal about Theravada tradition historically and in modernity, and used the exposure to iconography and local energies culturally as inspiration for this work. The piece is built upon the basic format of the Buddha’s trial with Mara (a Deva) as Mara tempts the Buddha from attaining perfection (Nirvana/Nibbana). But the inspiration for the piece is multi-layered. In Thailand they have a third gender, the Katooey or Ladyboy, which is a normative accepted aspect of the region. In my own experiences, also, I have come across many instances of gender transcendence—when I was eleven I spontaneously fell into a gender void in my awareness, unable to find anything that defined me as male or female. Later, as a late teen and young adult I began to realize the spirits of various gender types within me. Even the realization of the attributes of my parents merged within me added to this sense. The idea of transgender, as a term, became the transcendence of gender; namely the channeling of many variations of gender, and in due process inhabiting all of them, and yet none with particular ego attachment. It is a very Buddhist kind of meditation, to be aware of the discernments of many genders within one’s being, exploring them, and yet graduating past them as definitive markers of personal identity. One then becomes oriented naturally within the genders as a manner of being and not a manner of categorical reflection.” Please visit www.codyseekins.com.