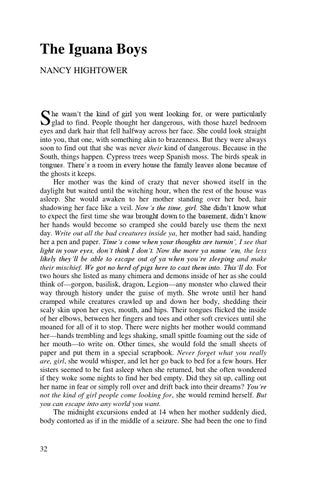 he wasn’t the kind of girl you went looking for, or were particularly glad to find. People thought her dangerous, with those hazel bedroom eyes and dark hair that fell halfway across her face. She could look straight into you, that one, with something akin to brazenness. But they were always soon to find out that she was never their kind of dangerous. Because in the South, things happen. Cypress trees weep Spanish moss. The birds speak in tongues. There’s a room in every house the family leaves alone because of the ghosts it keeps. Her mother was the kind of crazy that never showed itself in the daylight but waited until the witching hour, when the rest of the house was asleep. She would awaken to her mother standing over her bed, hair shadowing her face like a veil. Now’s the time, girl. She didn’t know what to expect the first time she was brought down to the basement, didn’t know her hands would become so cramped she could barely use them the next day. Write out all the bad creatures inside ya, her mother had said, handing her a pen and paper. Time’s come when your thoughts are turnin’, I see that light in your eyes, don’t think I don’t. Now the more ya name ‘em, the less likely they’ll be able to escape out of ya when you’re sleeping and make their mischief. We got no herd of pigs here to cast them into. This’ll do. For two hours she listed as many chimera and demons inside of her as she could think of—gorgon, basilisk, dragon, Legion—any monster who clawed their way through history under the guise of myth. She wrote until her hand cramped while creatures crawled up and down her body, shedding their scaly skin upon her eyes, mouth, and hips. Their tongues flicked the inside of her elbows, between her fingers and toes and other soft crevices until she moaned for all of it to stop. There were nights her mother would command her—hands trembling and legs shaking, small spittle foaming out the side of her mouth—to write on. Other times, she would fold the small sheets of paper and put them in a special scrapbook. Never forget what you really are, girl, she would whisper, and let her go back to bed for a few hours. Her sisters seemed to be fast asleep when she returned, but she often wondered if they woke some nights to find her bed empty. Did they sit up, calling out her name in fear or simply roll over and drift back into their dreams? You’re not the kind of girl people come looking for, she would remind herself. But you can escape into any world you want. The midnight excursions ended at 14 when her mother suddenly died, body contorted as if in the middle of a seizure. She had been the one to find

The Spring 2015 issue of A cappella Zoo.